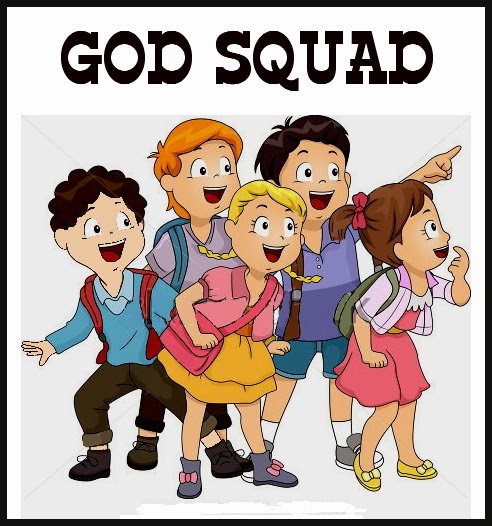 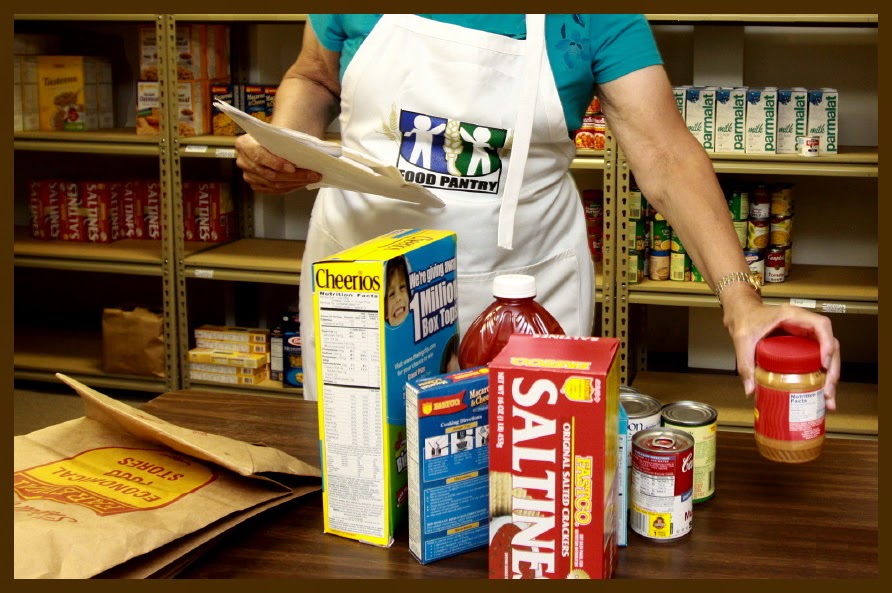 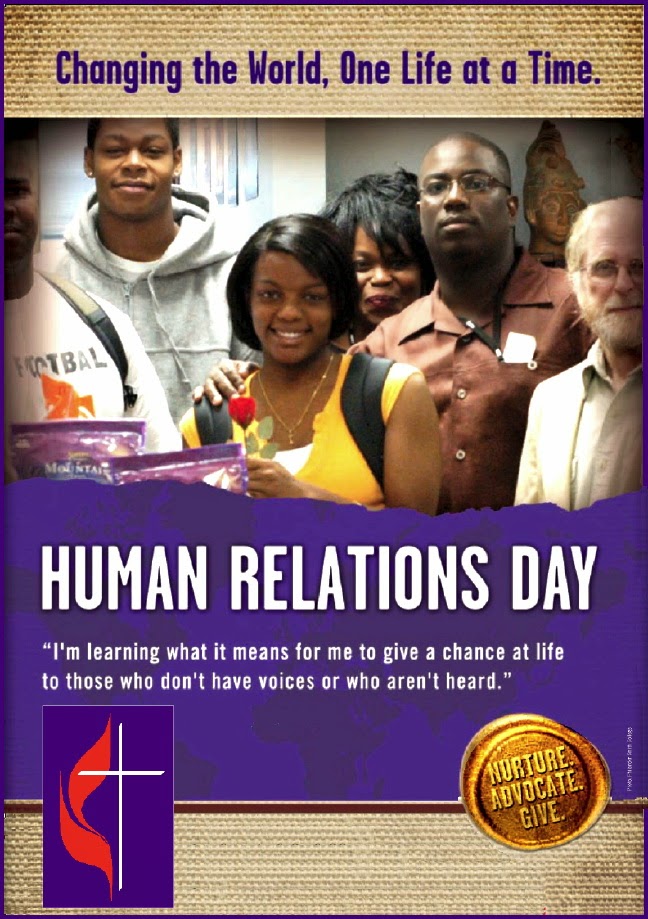 We need to focus on respecting beliefs
of others. There is a strong reminder for
us in the worst terrorist attacks France
had seen in decades which killed at
least 20 people.  Al-Qaida's branch in
Yemen said it directed the attack against
the magazine “Charlie Hebdo” in order
to avenge the honor of the Prophet
Muhammad, one target of the weekly's
satire.  Then Paris shut down a Jewish
neighborhood in fear that a wider cell
might launch more violence against the
Jewish people.

French President Francois Hollande
called on his nation to remain united
and stay alert. "We are a nation of free
people who cave to no pressure from
radical terrorists."

The drama began with the brothers Said
and Cherif Kouachi methodically killing
12 people Wednesday at the offices of
the weekly newspaper Charlie Hebdo,
before they escaped by car.
Hours before the Jewish Sabbath, the
street is usually crowded with shoppers
— French Jews and tourists alike. The
street is also only a half a mile from
Charlie Hebdo's newspaper offices.
Black-clad security forces surrounded
appropriate sites, then gunfire, and
booming explosions, with dense smoke,
heralded the news that the sieges were
over and the three gunmen were dead —
but also killed were four of the hostages
at the kosher market.  Sixteen hostages
were freed, one from the printing plant
and 15 others from the grocery store. 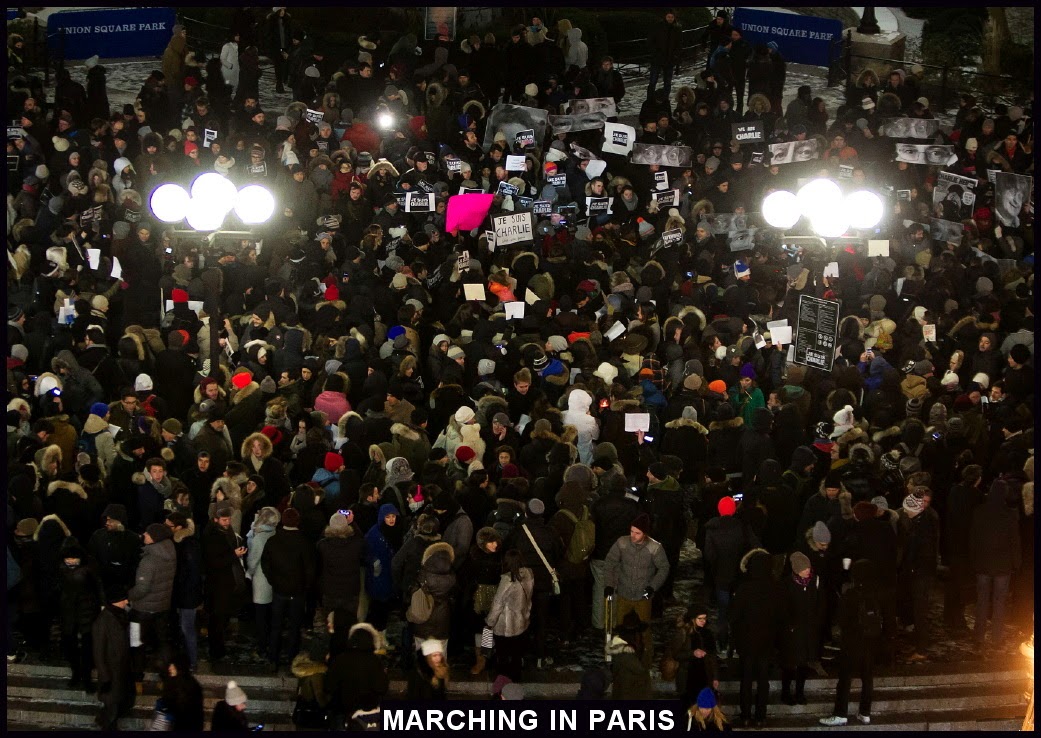 Many in France gathered in the streets
Wednesday evening, holding up signs
reading "Je Suis Charlie" which means
— I Am Charlie —
How do we learn to respect each other?
In dialogue? discussion? education?
reason?  Many elements of humanity
separate themselves from each other.
Is it perhaps a feeling of apprehension
and fear?
Is it a desire for superiority, power and
control?  It happens over and over.   In
the 1930's it was Hitler who believed he
was entitled to rule the world.  How on
earth did he get that idea?
———————————————————
SCRIPTURE READINGS —
———————————————————
1 SAMUEL 3:1-20
THE MESSAGE (MSG)
Samuel had some difficulty responding to a call from God.The message with the call (verses 11-20) was even harder to deliver to one who had been a father and a mentor.

“SPEAK, GOD. I’M READY TO LISTEN”
1-3 The boy Samuel was serving God
under Eli’s direction. This was at a time
when the revelation of God was rarely
heard or seen. One night Eli was sound
asleep (his eyesight was very bad—he
could hardly see). It was well before
dawn; the sanctuary lamp was still
burning. Samuel was still in bed in the
Temple of God, where the Chest of God
rested.
4-5 Then God called out, “Samuel,
Samuel!” 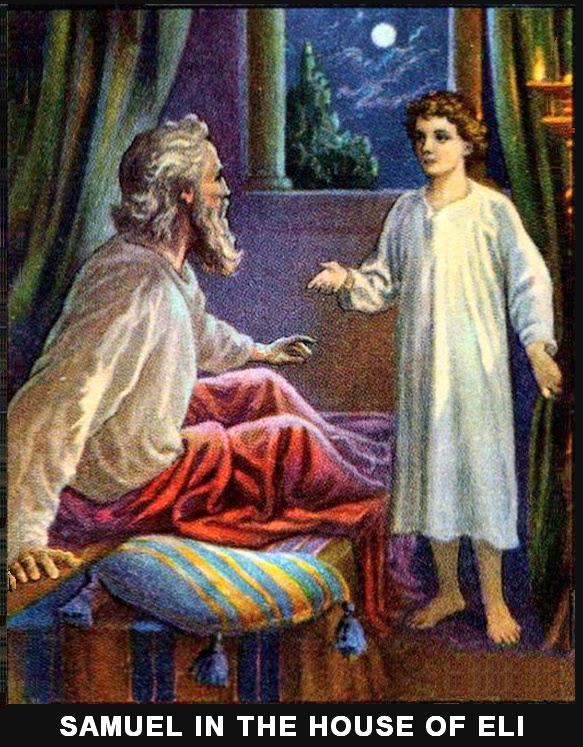 Samuel got up and went to Eli, “I heard
you call. Here I am.”

Again Eli said, “Son, I didn’t call you.
Go back to bed.” (This all happened
before Samuel knew God for himself. It
was before the revelation of God had
been given to him personally.)

That’s when it dawned on Eli that God
was calling the boy. So Eli directed
Samuel, “Go back and lie down. If the
voice calls again, say, ‘Speak, God. I’m
your servant, ready to listen.’” Samuel
returned to his bed.

10 Then God came and stood before him
exactly as before, calling out, “Samuel!
Samuel!” 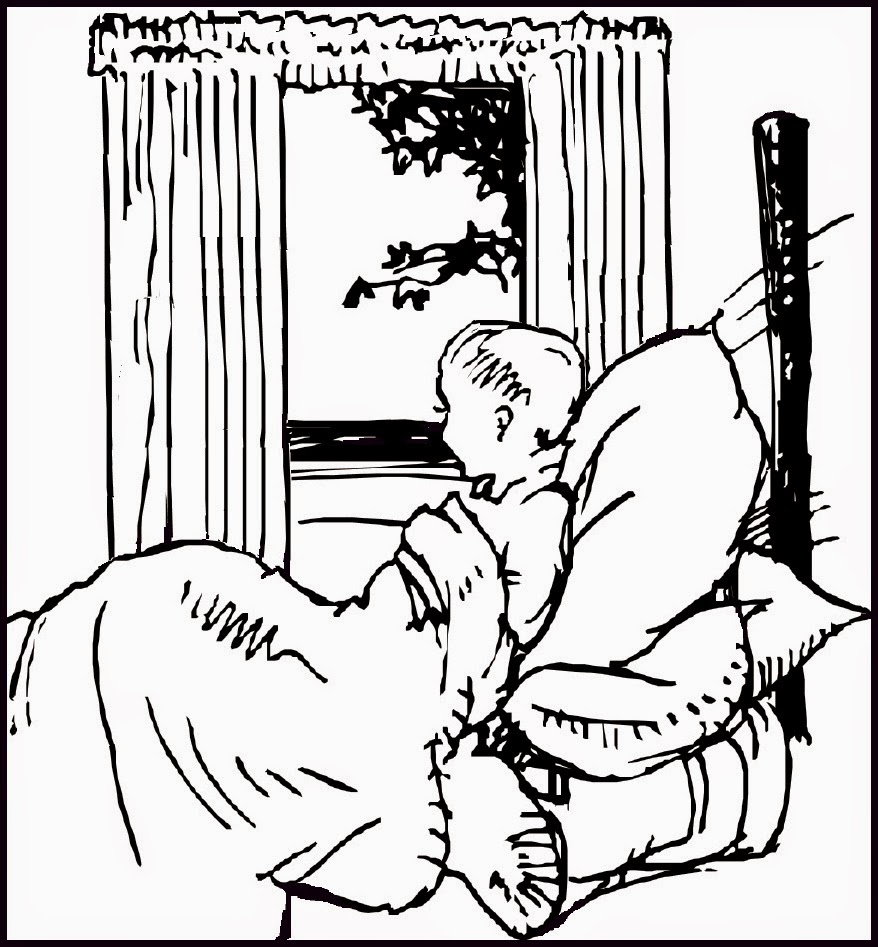 11-14 God said to Samuel, “Listen
carefully. I’m getting ready to do
something in Israel that is going to
shake everyone up and get their
attention. The time has come for me to
bring down on Eli’s family everything I
warned him of, every last word of it. I’m
letting him know that the time’s up. I’m
bringing judgment on his family for
good. He knew what was going on, that
his sons were desecrating God’s name
and God’s place, and he did nothing to
stop them. This is my sentence on the
family of Eli: The evil of Eli’s family can
never be wiped out by sacrifice or
offering.”
15 Samuel stayed in bed until morning,
then rose early and went about his
duties, opening the doors of the
sanctuary, but he dreaded having to tell
the vision to Eli.
16 But then Eli summoned Samuel:
“Samuel, my son!”
Samuel came running: “Yes? What can I
do for you?”

18 So Samuel told him, word for word.
He held back nothing.

Eli said, “He is God. Let him do whatever
he thinks best.”

A PSALM OF DAVID
1-6 God, investigate my life;
get all the facts firsthand.
I’m an open book to you;
even from a distance, you know what
I’m thinking.
You know when I leave and when I get
back;
I’m never out of your sight.
You know everything I’m going to say
before I start the first sentence.
I look behind me and you’re there,
then up ahead and you’re there, too—
your reassuring presence, coming
and going.
This is too much, too wonderful—
I can’t take it all in!

7-12 Is there anyplace I can go to avoid
your Spirit?
to be out of your sight?
If I climb to the sky, you’re there!
If I go underground, you’re there!
If I flew on morning’s wings
to the far western horizon,
You’d find me in a minute—
you’re already there waiting!
Then I said to myself, “Oh, he even sees
me in the dark!
At night I’m immersed in the light!”
It’s a fact: darkness isn’t dark to you;
night and day, darkness and light,
they’re all the same to you.

13-16 Oh yes, you shaped me first
inside, then out;
you formed me in my mother’s womb.
I thank you, High God—you’re breath-
taking!
Body and soul, I am marvelously
made!
I worship in adoration—what a
creation!
You know me inside and out,
you know every bone in my body;
You know exactly how I was made, bit
by bit,
how I was sculpted from nothing into
something.
Like an open book, you watched me
grow from conception to birth;
all the stages of my life were spread
out before you,
The days of my life all prepared
before I’d even lived one day.

17-22 Your thoughts—how rare, how
beautiful!
God, I’ll never comprehend them!
I couldn’t even begin to count them—
any more than I could count the sand
of the sea.
Oh, let me rise in the morning and live
always with you!
And please, God, do away with
wickedness for good!
And you murderers—out of here!—
all the men and women who belittle
you, God,
infatuated with cheap god-imitations.
See how I hate those who hate you, God,
see how I loathe all this godless
arrogance;
I hate it with pure, unadulterated hatred.
Your enemies are my enemies!
———————————————————
1 CORINTHIANS 6:12-20
THE MESSAGE (MSG)
Paul confronts the ease with which some in the church in Corinth could justify using prostitutes. This is no mere economic arrangement, Paul reminds. Just as in marriage we are made one with a spouse, so in baptism we have been made one with Christ. As spouses belong to and are united with each other, so we belong to and are united with Christ. We are to give glory and give allegiance to the One to whom we belong.
12 Just because something is technically
legal doesn’t mean that it’s spiritually
appropriate. If I went around doing
whatever I thought I could get by with, I’d
be a slave to my whims.

13 You know the old saying, “First you eat
to live, and then you live to eat”?  Well, it
may be true that the body is only a
temporary thing, but that’s no excuse for
stuffing your body with food, or indulging
it with sex. Since the Master honors you
with a body, honor him with your body!

16-20 There’s more to sex than mere skin
on skin. Sex is as much spiritual mystery
as physical fact. As written in Scripture,
“The two become one.” Since we want to
become spiritually one with the Master, we
must not pursue the kind of sex that
avoids commitment and intimacy, leaving
us more lonely than ever—the kind of sex
that can never “become one.” There is a
sense in which sexual sins are different
from all others. In sexual sin we violate
the sacredness of our own bodies, these
bodies that were made for God-given and
God-modeled love, for “becoming one”
with another. Or didn’t you realize that
your body is a sacred place, the place of
the Holy Spirit? Don’t you see that you
can’t live however you please,
squandering what God paid such a high
price for? The physical part of you is not
some piece of property belonging to the
spiritual part of you. God owns the
whole works. So let people see God in
and through your body.
———————————————————
JOHN 1:43-51
THE MESSAGE (MSG)
Jesus calls Philip to follow him. Philip announces to Nathanael that he has found the one expected by Moses and the prophets. Nathanael is skeptical until Jesus tells him he was watching Nathanael as he was sitting under a fig tree.
43-44 The next day Jesus decided to go
to Galilee. When he got there, he ran
across Philip and said, “Come, follow
me.” 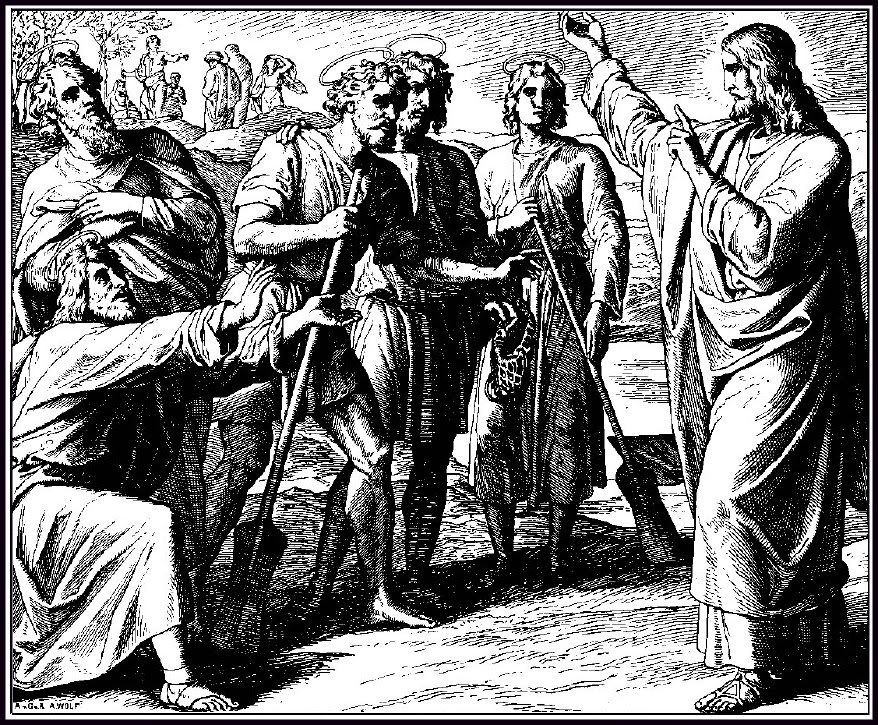 (Philip’s hometown was Bethsaida, the
same as Andrew and Peter.)
45-46 Philip went and found Nathanael
and told him, “We’ve found the One
Moses wrote of in the Law, the One
preached by the prophets. It’s Jesus,
Joseph’s son, the one from Nazareth!”
Nathanael said, “Nazareth? You’ve got
to be kidding.”
But Philip said, “Come, see for
yourself.”

47 When Jesus saw him coming he said,
“There’s a real Israelite, not a false bone
in his body.”
48 Nathanael said, “Where did you get
that idea? You don’t know me.”

Jesus answered, “One day, long before
Philip called you here, I saw you under
the fig tree.”

49 Nathanael exclaimed, “Rabbi! You are
the Son of God, the King of Israel!”