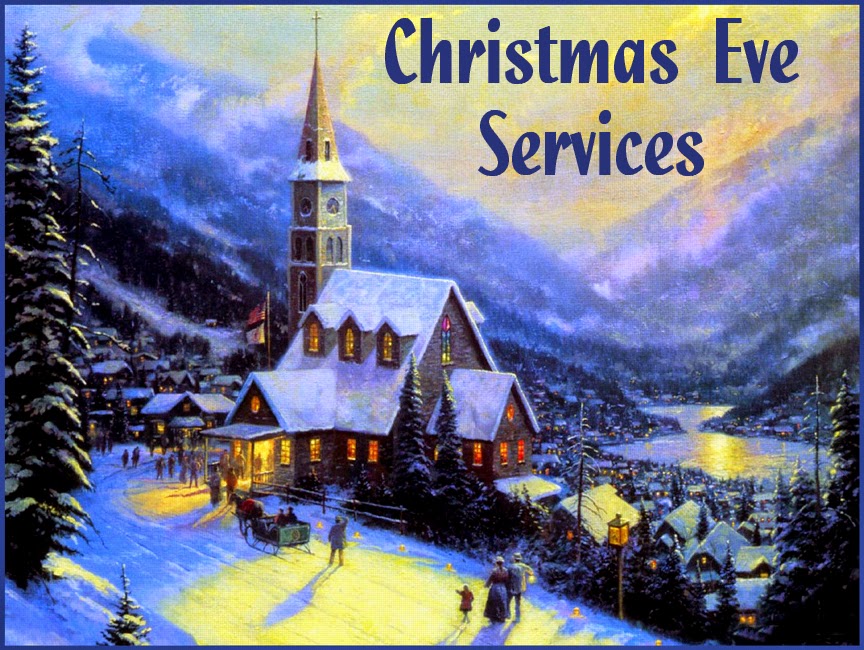 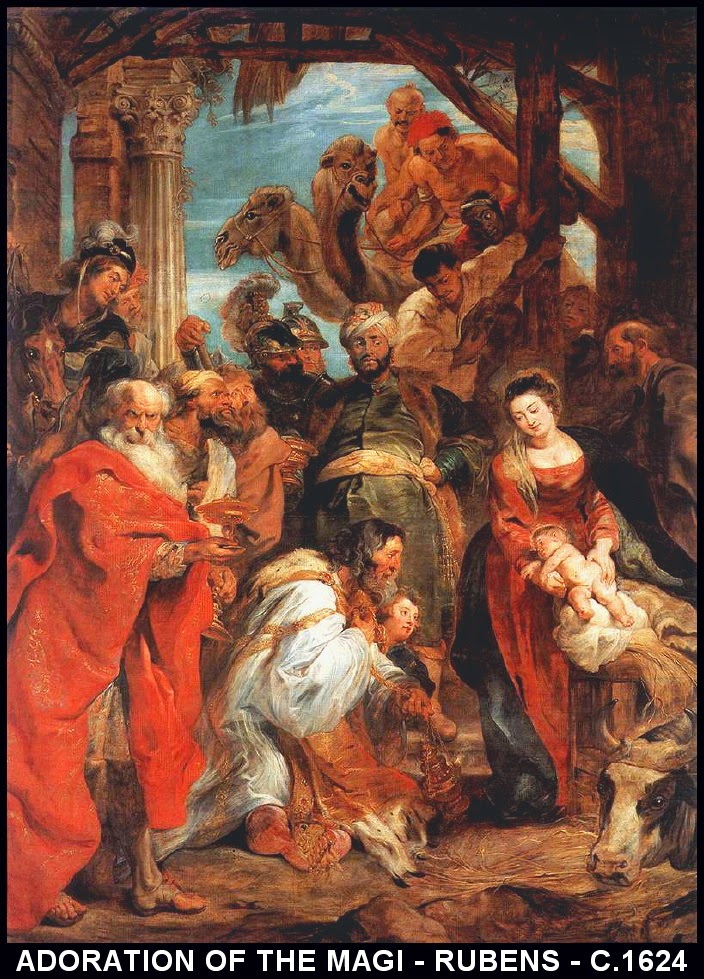 ≈≈≈≈≈≈≈≈≈≈≈≈≈≈≈≈≈≈≈≈≈≈≈≈≈≈≈≈≈≈≈≈≈≈≈
SUNDAY, DECEMBER 28TH —
FIRST SUNDAY AFTER CHRISTMAS• COLOR: PURPLE OR BLUE
———————————————————
SCRIPTURE READINGS —
———————————————————
ISAIAH 61:10-62:3
THE MESSAGE (MSG)
The prophet speaks of the restoration of Jerusalem, and of its "vindication" that "shines out like the dawn, and her salvation shining like a burning torch."
10-11 I will sing for joy in God,
explode in praise from deep in my
soul!
He dressed me up in a suit of salvation,
he outfitted me in a robe of
righteousness,
As a bridegroom who puts on a tuxedo
and a bride a jeweled tiara.
For as the earth bursts with spring wild
flowers,
and as a garden cascades with
blossoms,
So the Master, God, brings
righteousness into full bloom
and puts praise on display before the
nations.
Look, Your Savior Comes!
1-5 Regarding Zion, I can’t keep my
mouth shut,
regarding Jerusalem, I can’t hold my
tongue,
Until her righteousness blazes down
like the sun
and her salvation flames up like a
torch.
Foreign countries will see your
righteousness,
and world leaders your glory.
You’ll get a brand-new name
straight from the mouth of God.
You’ll be a stunning crown in the palm
of God’s hand,
a jeweled gold cup held high in the
hand of your God.
No more will anyone call you Rejected,
and your country will no more be
called Ruined.
You’ll be called Hephzibah (My Delight),
and your land Beulah (Married),
Because God delights in you
and your land will be like a wedding
celebration.
For as a young man marries his virgin
bride,
so your builder marries you,
And as a bridegroom is happy in his
bride,
so your God is happy with you.
———————————————————
PSALM 148 (UMH 861)
THE MESSAGE (MSG)
All the orders of creation join in praise
to God.
1-5 Hallelujah!
Praise God from heaven,
praise him from the mountaintops; 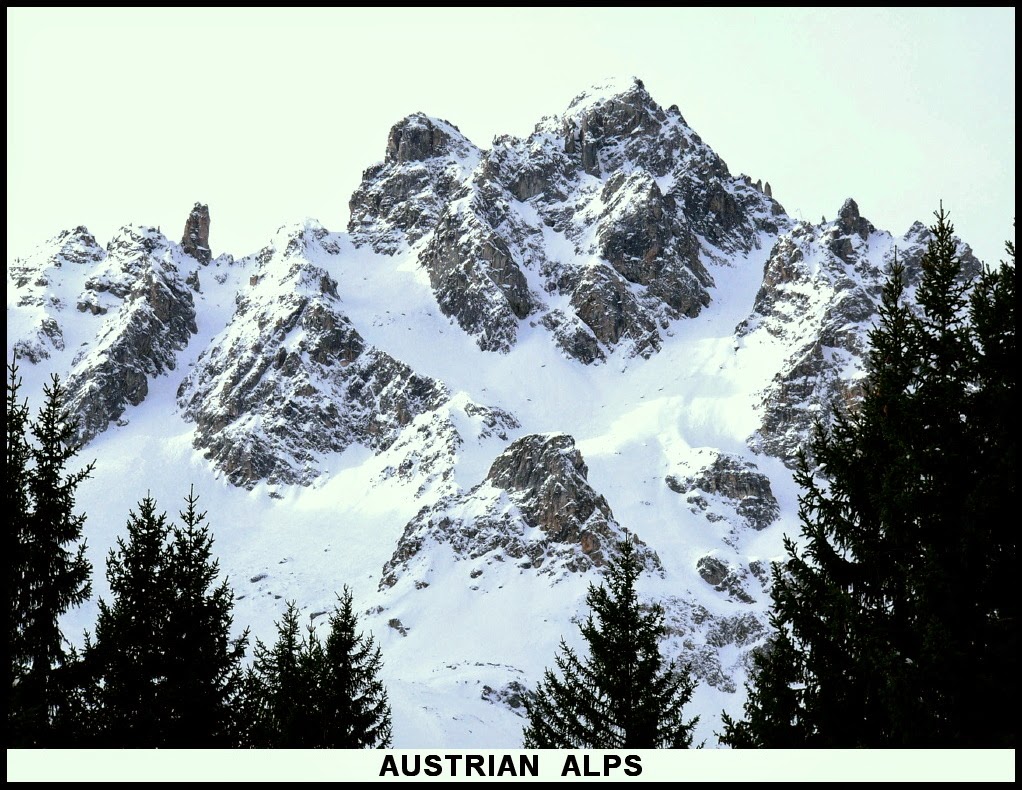 Praise him, all you his angels, 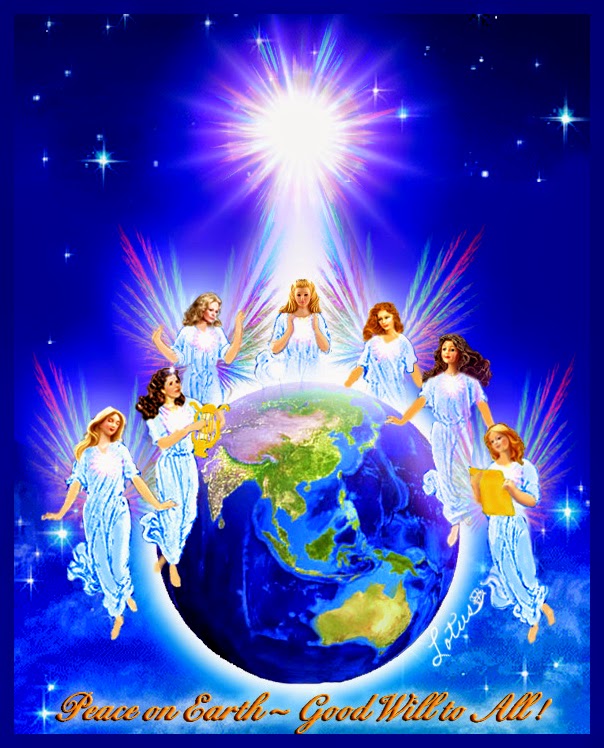 praise him, all you his warriors,
Praise him, sun and moon, 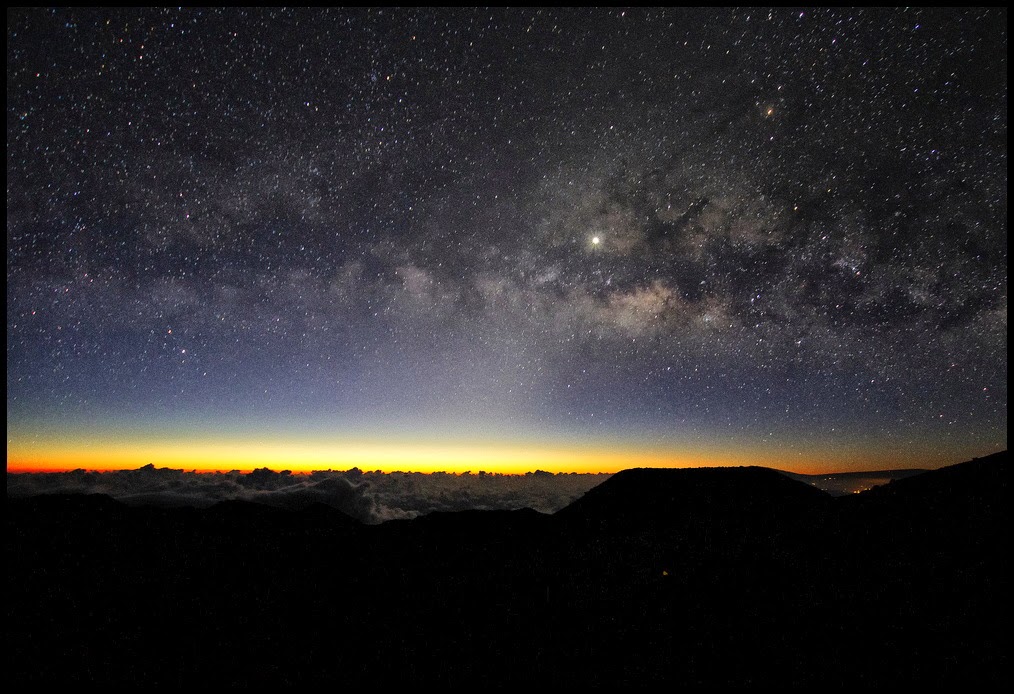 praise him, you morning stars;
Praise him, high heaven,
praise him, heavenly rain clouds;
Praise, oh let them praise the name of
God—
he spoke the word, and there they
were!
6 He set them in place
from all time to eternity;
He gave his orders,
and that’s it!
7-12 Praise God from earth,
you sea dragons, you fathomless
ocean deeps;
Fire and hail, snow and ice, 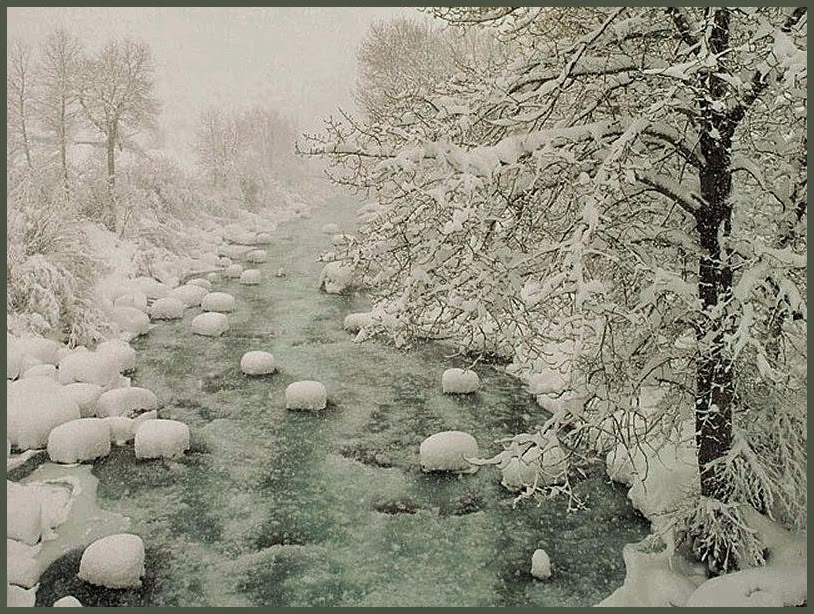 hurricanes obeying his orders;
Mountains and all hills, 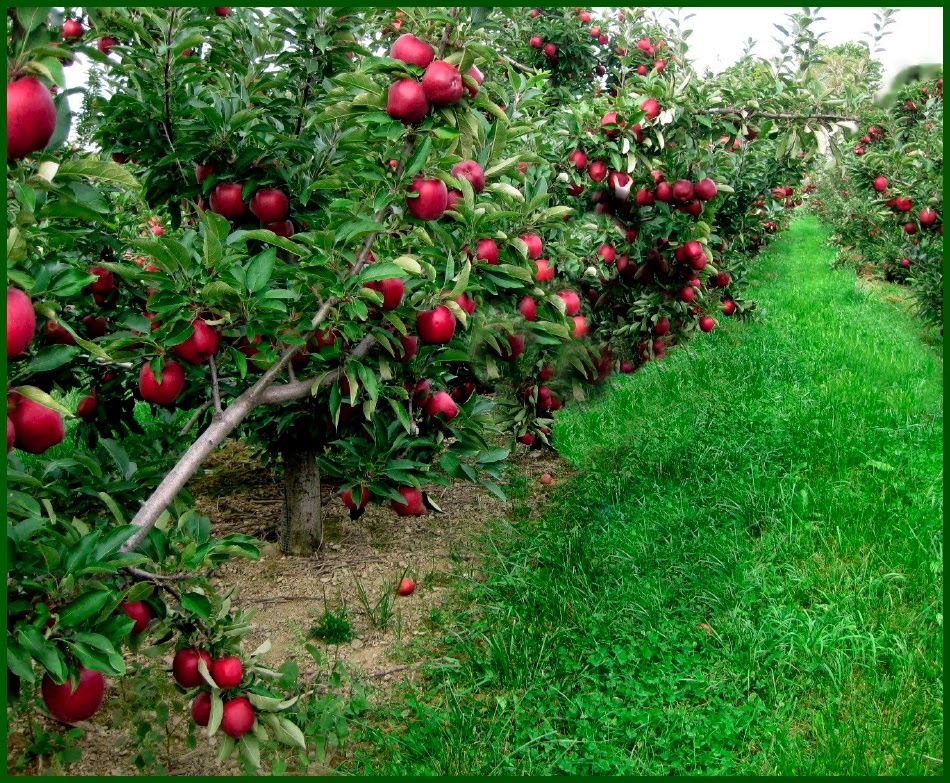 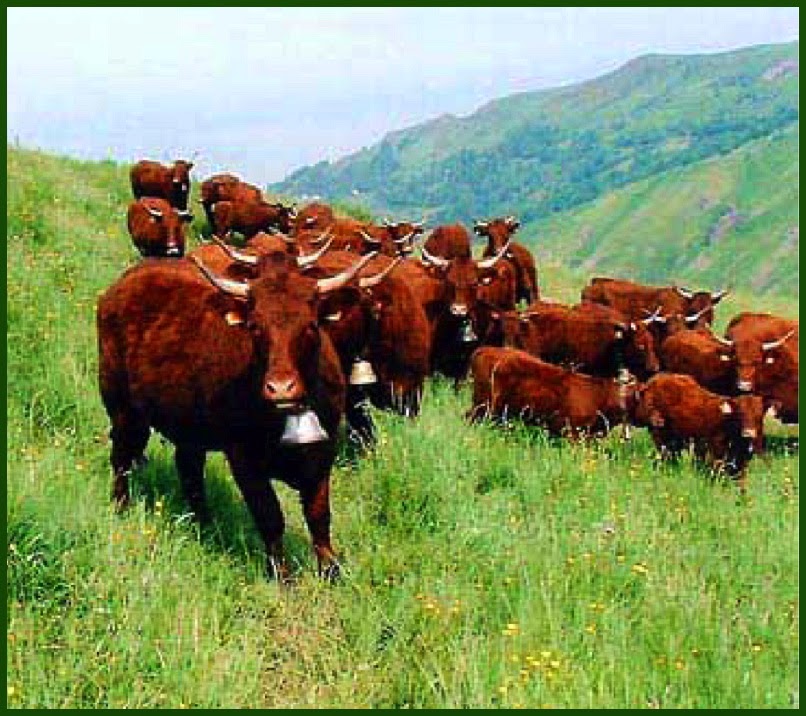 snakes, and birds in flight; 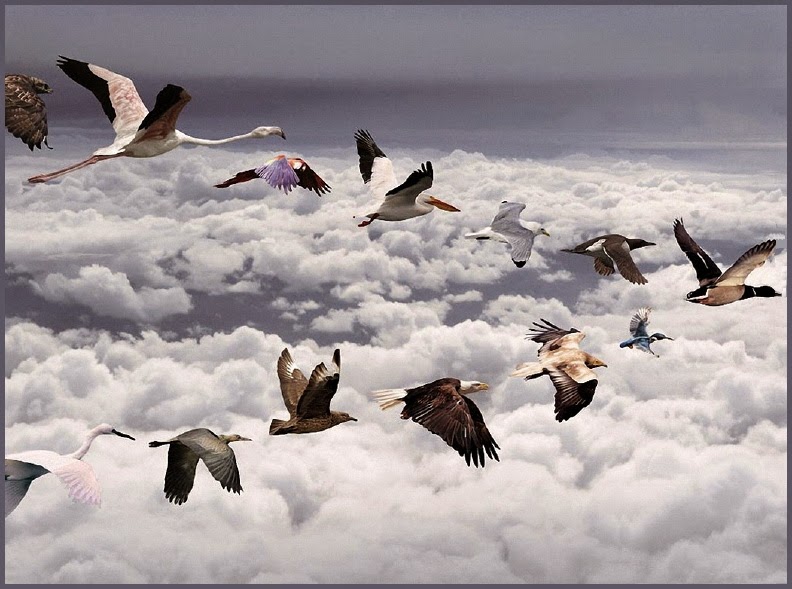 Earth’s kings and all races,
leaders and important people,
Robust men and women in their prime,
and yes, graybeards and little children. 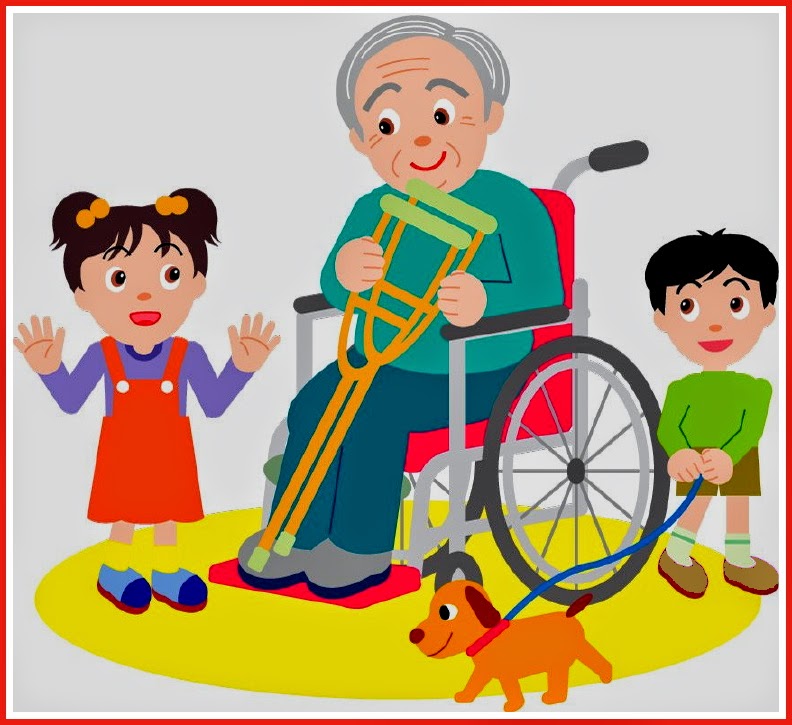 13-14 Let them praise the name of God
it’s the only Name worth praising.
His radiance exceeds anything in earth
and sky;
he’s built a monument—his very own
people!

Praise from all who love God!
Israel’s children, intimate friends of
God.
Hallelujah!
———————————————————
GALATIANS 4:4-7
THE MESSAGE (MSG)
God's adoption of all baptized into
Christ makes us God's children and
heirs to promises of God's covenant.
4-7 But when the time arrived that was
set by God the Father, God sent his Son,
born among us of a woman, born under
the conditions of the law so that he
might redeem those of us who have
been kidnapped by the law. Thus we
have been set free to experience our
rightful heritage. You can tell for sure
that you are now fully adopted as his
own children because God sent the
Spirit of his Son into our lives crying
out, “Papa! Father!” Doesn’t that
privilege of intimate conversation with
God make it plain that you are not a
slave, but a child? If you are a child,
you’re also an heir, with complete
access to the inheritance.
———————————————————
LUKE 2:22-40
THE MESSAGE (MSG)
Luke describes the song (Simeon) and the prophecy (Anna) that accompany the presentation of Jesus at the temple at the time of his family's offering of the sacrifice for the firstborn.
22-24 Then when the days stipulated by
Moses for purification were complete,
they took him up to Jerusalem to offer
him to God as commanded in God’s
Law: “Every male who opens the womb
shall be a holy offering to God,” and
also to sacrifice the “pair of doves or
two young pigeons” prescribed in
God’s Law.

25-32 In Jerusalem at the time, there
was a man, Simeon by name, a good
man, a man who lived in the prayerful
expectancy of help for Israel. And the
Holy Spirit was on him. The Holy Spirit
had shown him that he would see the
Messiah of God before he died. Led by
the Spirit, he entered the Temple. As the
parents of the child Jesus brought him
in to carry out the rituals of the Law,
Simeon took him into his arms and
blessed God: 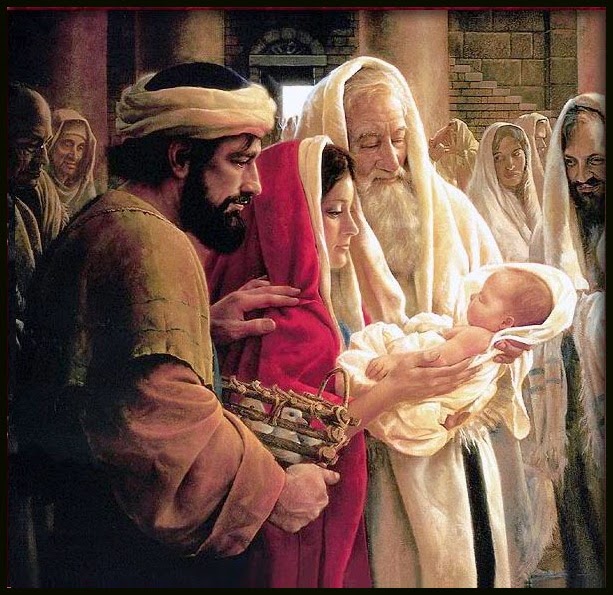 God, you can now release your servant;
release me in peace as you promised.
With my own eyes I’ve seen your
salvation;
it’s now out in the open for everyone
to see:
A God-revealing light to the non-Jewish
nations,
and of glory for your people Israel.

33-35 Jesus’ father and mother were
speechless with surprise at these
words. Simeon went on to bless them,
and said to Mary his mother,

This child marks both the failure and
the recovery of many in Israel,
A figure misunderstood and
contradicted—
the pain of a sword-thrust through
you—
But the rejection will force honesty,
as God reveals who they really are.

36-38 Anna the prophetess was also
there, a daughter of Phanuel from the
tribe of Asher. She was by now a very
old woman. She was married for seven
years and a widow for eighty-four.
She never left the Temple area,
worshiping night and day with her
fastings and prayers. At the very time
Simeon was praying, she showed up,
broke into an anthem of praise to God,
and talked about the child to all who
were waiting expectantly for the freeing
of Jerusalem. 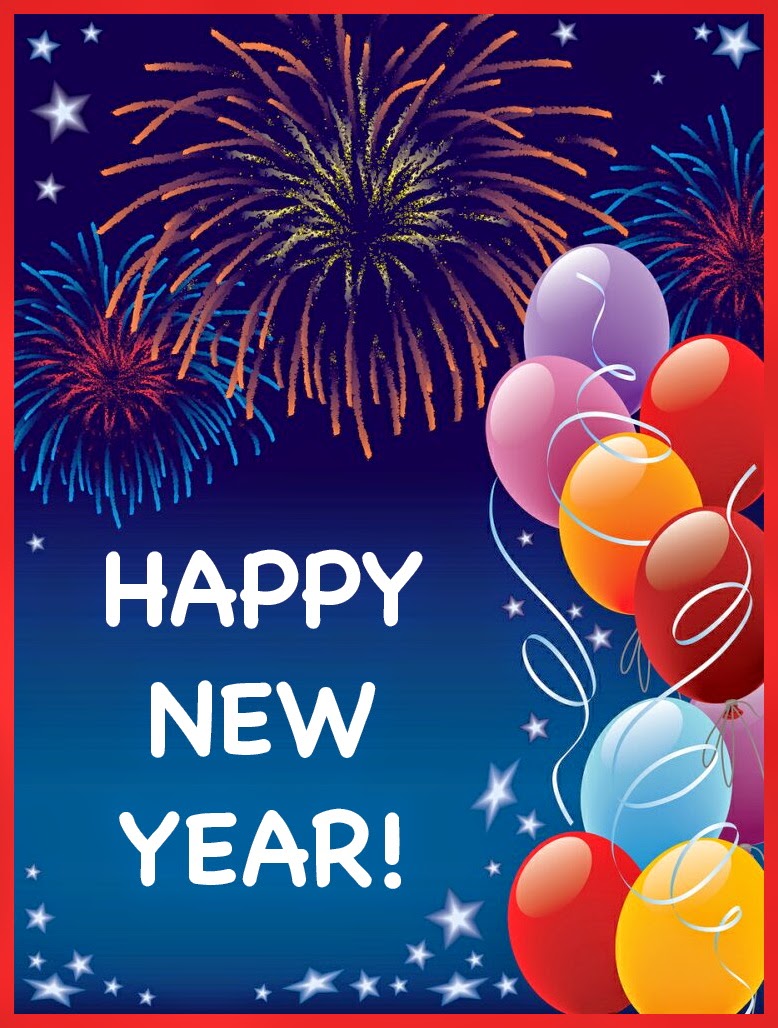 May happiness and prosperity be yours
throughout the new year!
Happy Birthday Devin Hunter!
Happy Birthday Stephen Sheeder!
———————————————————
• 0404 - The last gladiator competition
was held in the Colosseum Rome.
• 1622 - The Papal Chancery adopted
January 1st as the beginning of the New
Year (instead of March 25th).
• 1797 - Albany became the capital of
New York state, replacing New York City.
• 1808 - The United States prohibited
importation of slaves from Africa.
• 1863 - U.S. President Lincoln signed
the Emancipation Proclamation, which
declared that all slaves in rebel states
were free.
• 1898 - Manhattan, the Bronx, Brooklyn,
Queens and Staten Island were all
consolidated into New York City.
• 1901 - The Commonwealth of Australia
was founded. Lord Hopetoun officially
assumed the duties as the first
Governor-General.
• 1902 - The first Tournament of Roses
(Rose Bowl) collegiate football game
was played in Pasadena, California.
• 1909 - The first payments of old-age
pensions were made in Britain. People
over 70 received five shillings a week.
(about .46 cents)
• 1934 - Alcatraz Island officially became
a Federal Prison.
• 1942 - U.S. President Franklin D.
Roosevelt and British Prime Minister
Winston Churchill issued a declaration
called the "United Nations." It was
signed by 26 countries that vowed to
create an international postwar World
War II peacekeeping organization.
• 1959 - Fidel Castro overthrew the
government of Fulgencio Batista, and
seized power in Cuba.
• 1995 - The World Trade Organization
came into existence. This group of 125
nations would monitor global trade.
≈≈≈≈≈≈≈≈≈≈≈≈≈≈≈≈≈≈≈≈≈≈≈≈≈≈≈≈≈≈≈≈≈≈≈
FRIDAY, JANUARY 2ND —
———————————————————
• 1492 - The leader of the last Arab
stronghold in Spain surrendered to the
Spanish forces of King Ferdinand II and
Queen Isabella I.
• 1788 - Georgia became the 4th state to
ratify the U.S. Constitution.
• 1842 - In Fairmount, Pennsylvania, the
first wire suspension bridge was open
to traffic.
• 1872 - Brigham Young, the 71-year-old
leader of the Mormon Church, was
arrested on a charge of bigamy. He had
25 wives.
• 1892 - Ellis Island opened as America's
first federal immigration center. Annie
Moore, at age 15, became the very first
person to pass through.
• 1910 - The first junior high school in
the United States opened.  McKinley
School in Berkeley, CA, housed seventh
and eighth grade students. In a separate
building students were housed who
attended grades 9-12.
• 1929 - The United States and Canada
reached an agreement of joint action to
preserve Niagara Falls.
• 1998 - Russia began circulating new
rubles in effort to keep inflation in check
and promote confidence.
≈≈≈≈≈≈≈≈≈≈≈≈≈≈≈≈≈≈≈≈≈≈≈≈≈≈≈≈≈≈≈≈≈≈≈
SATURDAY, JANUARY 3RD —
Happy Birthday Sadie Peterson!
———————————————————
• 1496 - References in Leonardo da Vinci
notebooks suggest that he tested his
flying machine today. The test did not
succeed and he didn't try to fly again for
several years.
• 1521 - Pope Leo X excommunicated
Martin Luther.
• 1823 - Stephen F. Austin received a
grant from the Mexican government and
began colonization in the region of the
Brazos River in Texas.
• 1833 - England seized control of the
Falkland Islands in the South Atlantic.
About 150 years later, Argentina seized
the islands from the British, but England
took them back after a 74-day war.
• 1924 - English explorer Howard Carter
discovered the sarcophagus of King
Tutankhamen in the Valley of the Kings,
near Luxor, Egypt.
• 1925 - In Italy, Mussolini announced
that he would take dictatorial powers.
• 1938 - The March of Dimes was
established by U.S. President Franklin
Delano Roosevelt. This organization
fights poliomyelitis. The original name
of the organization was the National
Foundation for Infantile Paralysis.
• 1959 - In the United States, Alaska
became the 49th state.
• 1962 - Pope John XXIII
excommunicated Cuban prime minister
Fidel Castro.
≈≈≈≈≈≈≈≈≈≈≈≈≈≈≈≈≈≈≈≈≈≈≈≈≈≈≈≈≈≈≈≈≈≈≈
Thank you for your help this week.
You do make the wheels turn you know.