OUR WEEK-AUGUST 17TH TO AUGUST 23RD 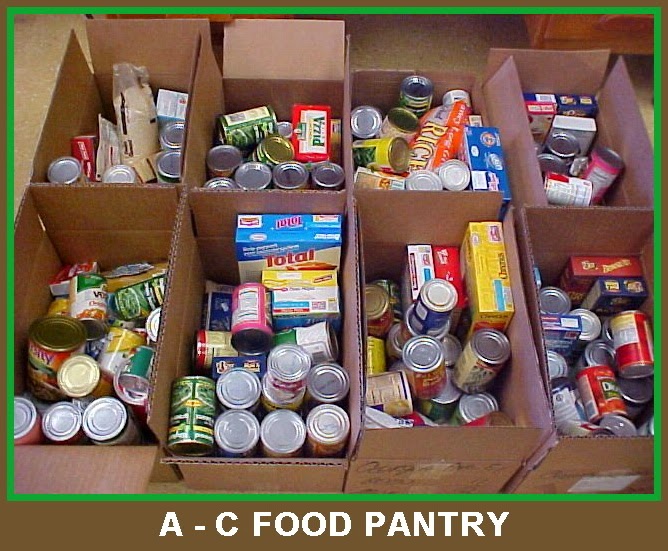 Focus on the “first families” of the people
of Israel (Abraham, Isaac, Jacob and his
children) is coming to a close with the end
of the Joseph story this week. This is not
the end of Genesis or the end of the family
story.  But what happens in this story lays
out the main plot lines for the remainder of
Genesis. Later we will see what happens
when Egypt has a Pharaoh who did not
know Joseph.
Joseph, Prince of Egypt - now second in
command, reveals his identity to his
brothers and promises to provide land,
food, and protection for the family during
the time of famine and beyond.
1-2 Joseph couldn't hold himself in any
longer, keeping up a front before all his
attendants. He cried out, "Leave! Clear out
—everyone leave!" So there was no one
with Joseph when he identified himself to
his brothers. But his sobbing was so
violent that the Egyptians couldn't help
but hear him. The news was soon reported
to Pharaoh's palace. 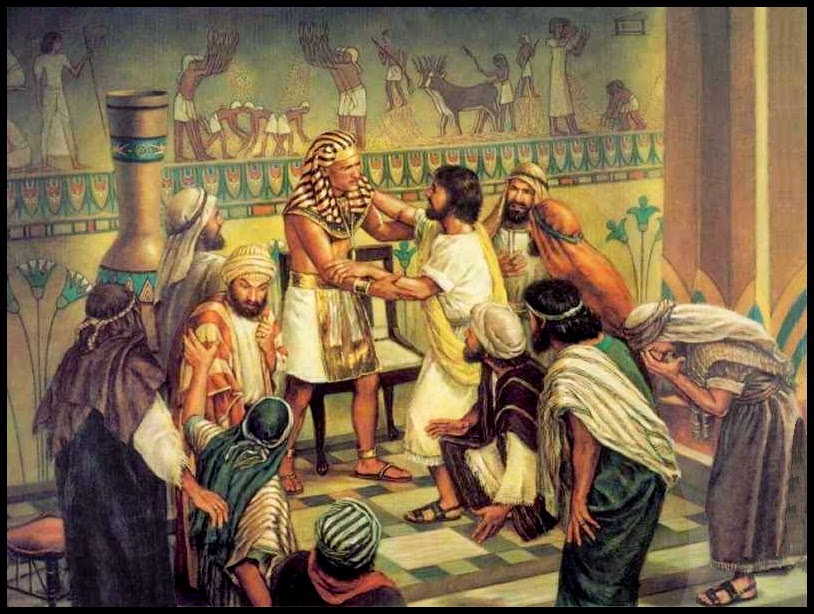 3 Joseph spoke to his brothers: "I am
Joseph. Is my father really still alive?" But
his brothers couldn't say a word. 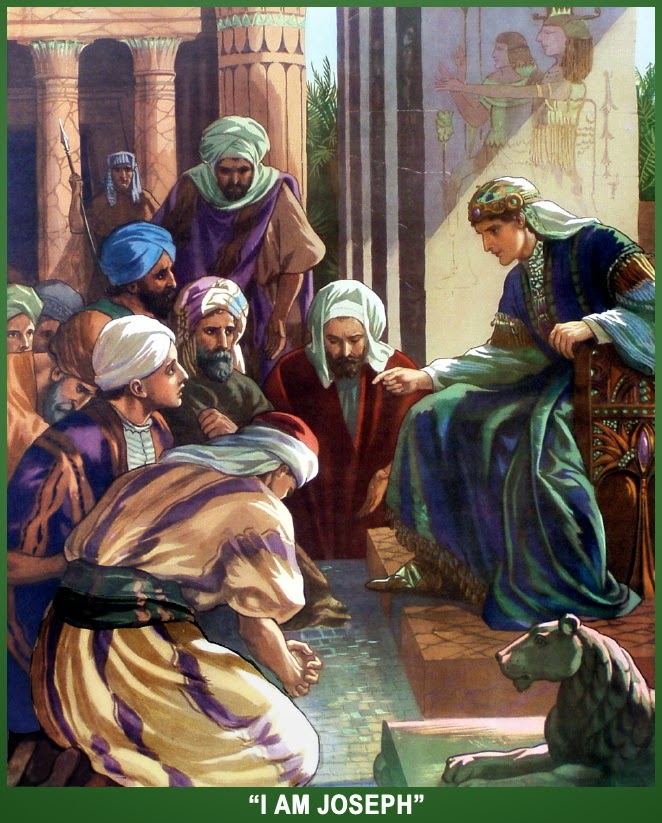 They were speechless—they couldn't
believe what they were hearing and seeing.

4-8 "Come closer to me," Joseph said to
his brothers. They came closer. "I am
Joseph your brother whom you sold into
Egypt. But don't feel badly, don't blame
yourselves for selling me. God was behind
it. God sent me here ahead of you to save
lives. There has been a famine in the land
now for two years; the famine will continue
for five more years—neither plowing nor
harvesting. God sent me on ahead to pave
the way and make sure there was a
remnant in the land, to save your lives in
an amazing act of deliverance. So you see,
it wasn't you who sent me here but God.
He set me in place as a father to Pharaoh,
put me in charge of his personal affairs,
and made me ruler of all Egypt.
9-11 "Hurry back to my father. Tell him,
'Your son Joseph says: I'm master of all of
Egypt. Come as fast as you can and join
me here. I'll give you a place to live in
Goshen where you'll be close to me—you,
your children, your grandchildren, your
flocks, your herds, and anything else you
can think of. I'll take care of you there
completely. There are still five more years
of famine ahead; I'll make sure all your
needs are taken care of, you and everyone
connected with you—you won't want for a
thing.'
12-13 "Look at me. You can see for your-
selves, and my brother Benjamin can see
for himself, that it's me, my own mouth,
telling you all this. Tell my father all about
the high position I hold in Egypt, tell him
everything you've seen here, but don't
take all day—hurry up and get my father
down here."
14-15 Then Joseph threw himself on his
brother Benjamin's neck and wept, and
Benjamin wept on his neck. He then
kissed all his brothers and wept over them. 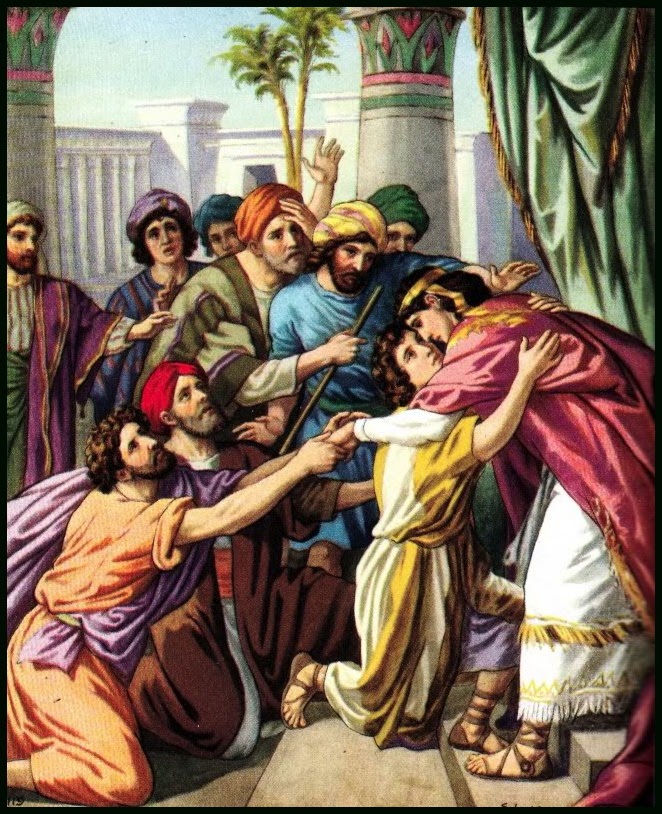 Only then were his brothers able to talk
with him.
————————————————————
PSALM 133   (UMH 850)
THE MESSAGE (MSG)
A PILGRIM SONG OF DAVID
1-3 How wonderful, how beautiful, when
brothers and sisters get along!
It's like costly anointing oil
flowing down head and beard,
Flowing down Aaron's beard,
flowing down the collar of his priestly
robes.
It's like the dew on Mount Hermon
flowing down the slopes of Zion.
Yes, that's where God commands the
blessing,
ordains eternal life.
————————————————————
ROMANS 11:1-2, 29-32
THE MESSAGE (MSG)
God has taken nothing away from the promises, calling, and gifts previously given to the physical and spiritual descendants of Jacob/Israel. Israel has been firmly planted and cared for like a well-tended olive tree. Its mature “trunk” has experienced much pruning over the years to keep it fruitful.Paul concludes his excursus on the theological connection between God's covenant with Israel and the Jewish —Gentile church with a strong affirmation of Israel's place in God's saving intent toward the whole world.God has not abandoned the Jewish people. Rather, God has grafted even Gentiles into the covenant of promise through Jesus Christ.
THE LOYAL MINORITY
1-2 Does this mean, then, that God is so
fed up with Israel that he'll have nothing
more to do with them? Hardly. Remember
that I, the one writing these things, am an
Israelite, a descendant of Abraham out of
the tribe of Benjamin. You can't get much
more Semitic than that! So we're not
talking about repudiation. God has been
too long involved with Israel, has too
much invested, to simply wash his hands
of them.
2-6 Do you remember that time Elijah was
agonizing over this same Israel and cried
out in prayer?

“God, they murdered your prophets,
They trashed your altars;
I'm the only one left and now they're after
me!”
And do you remember God's answer?
“I still have seven thousand who haven't
quit,
Seven thousand who are loyal to the
finish.”

It's the same today. There's a fiercely loyal
minority still—not many, perhaps, but
probably more than you think. They're
holding on, not because of what they think
they're going to get out of it, but because
they're convinced of God's grace and
purpose in choosing them. If they were
only thinking of their own immediate self-
interest, they would have left long ago.
A COMPLETE ISRAEL
25-29 I want to lay all this out on the table
as clearly as I can, friends. This is
complicated. It would be easy to
misinterpret what's going on and
arrogantly assume that you're royalty and
they're just rabble, out on their ears for
good. But that's not it at all. This hardness
on the part of insider Israel toward God is
temporary. Its effect is to open things up to
all the outsiders so that we end up with a
full house. Before it's all over, there will be
a complete Israel. As it is written,

A champion will stride down from the
mountain of Zion;
he'll clean house in Jacob.
And this is my commitment to my people:
removal of their sins.
From your point of view as you hear and
embrace the good news of the Message, it
looks like the Jews are God's enemies. But
looked at from the long-range perspective
of God's overall purpose, they remain
God's oldest friends. God's gifts and God's
call are under full warranty—never
canceled, never rescinded.

30-32 There was a time not so long ago
when you were on the outs with God. But
then the Jews slammed the door on him
and things opened up for you. Now they
are on the outs. But with the door held
wide open for you, they have a way back
in. In one way or another, God makes sure
that we all experience what it means to be
outside so that he can personally open the
door and welcome us back in.
————————————————————
MATTHEW 15:10-20, 21-28
THE MESSAGE (MSG)
Jesus tells the crowd that it is what comes out of the heart that pollutes us. Then Jesus discovers great faith coming from a foreigner (the Canaanite woman) who won't take "no" for an answer.
10-11 He then called the crowd together
and said, "Listen, and take this to heart.
It's not what you swallow that pollutes
your life, but what you vomit up."

12 Later his disciples came and told him,
"Did you know how upset the Pharisees
were when they heard what you said?"

13-14 Jesus shrugged it off. "Every tree
that wasn't planted by my Father in heaven
will be pulled up by its roots. Forget them.
They are blind men leading blind men.
When a blind man leads a blind man, they
both end up in the ditch."

16-20 Jesus replied, "You, too? Are you
being willfully stupid? Don't you know that
anything that is swallowed works its way
through the intestines and is finally
defecated? But what comes out of the
mouth gets its start in the heart. It's from
the heart that we vomit up evil arguments,
murders, adulteries, fornications, thefts,
lies, and cussing. That's what pollutes.
Eating or not eating certain foods, washing
or not washing your hands—that's neither
here nor there."
MATTHEW 15:21-28
HEALING THE PEOPLE
21-22 From there Jesus took a trip to Tyre
and Sidon. They had hardly arrived when a
Canaanite woman came down from the
hills and pleaded, "Mercy, Master, Son of
David! My daughter is cruelly afflicted by
an evil spirit."

23 Jesus ignored her. The disciples came
and complained, "Now she's bothering us.
Would you please take care of her? She's
driving us crazy."

24 Jesus refused, telling them, "I've got
my hands full dealing with the lost sheep
of Israel." 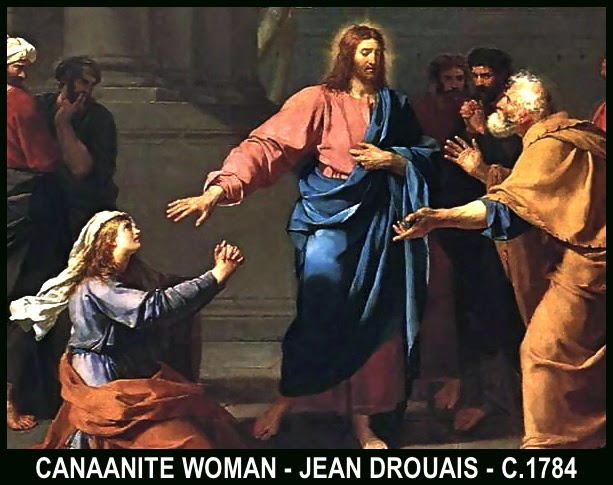 25 Then the woman came back to Jesus,
went to her knees, and begged. "Master,
help me."

26 He said, "It's not right to take bread out
of children's mouths and throw it to dogs."

27 She was quick: "You're right, Master,
but beggar dogs do get scraps from the
master's table." 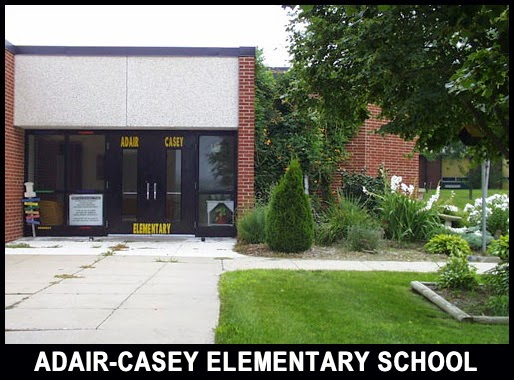 — A-C SCHOOLS OPEN TODAY —
Beginning at 8:20 A.M. to 2:20 P.M.
Watch for little feet darting right and left,
in and out or around in circles.  Children
are earth's most precious resource. 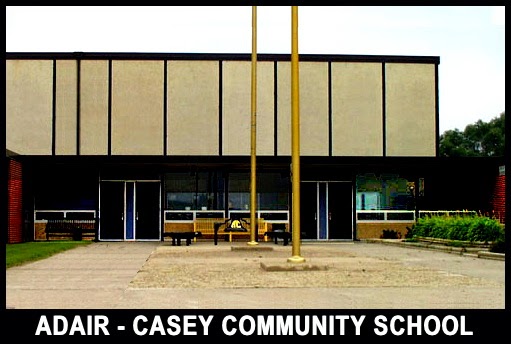 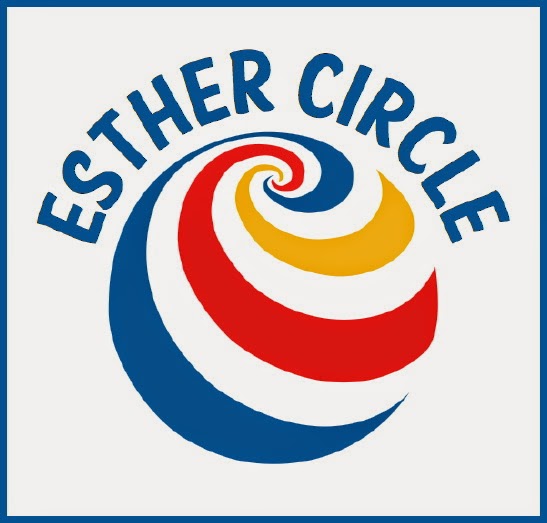 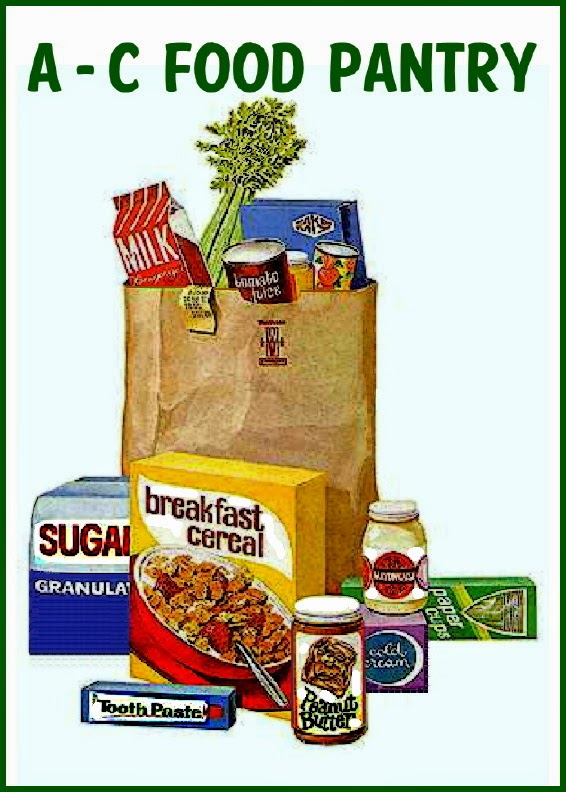 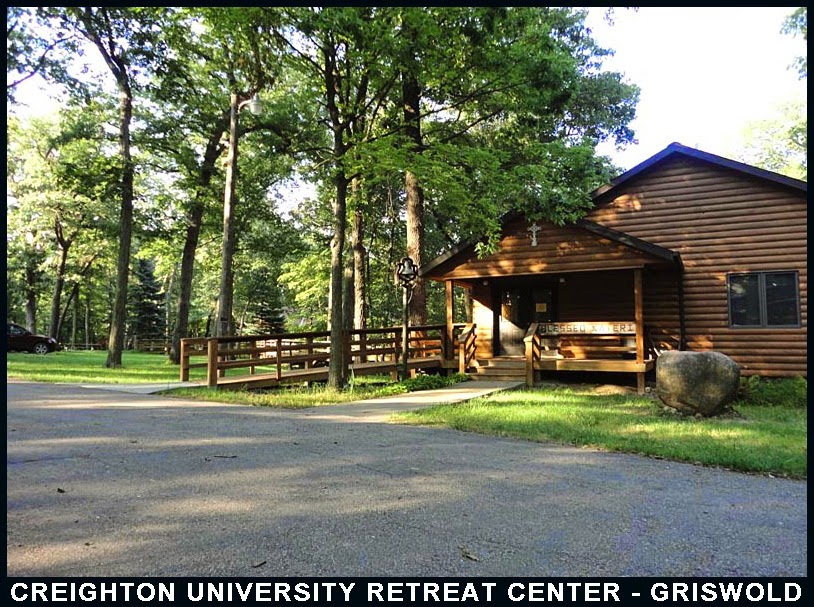 CLERGY DAY APART
CREIGHTON UNIVERSITY RETREAT
CENTER AT GRISWOLD, IOWA
————————————————————
Thank you for your contributions to our
church life this week.  It has been hectic
on the world stage recently.  There are
factions of society who believe they alone
are God's chosen people.  I believe we are
all God's chosen people and He would like
nothing better than to see us all get along.
In fact our continued existence
may depend on it.

God bless and keep you,
Donna