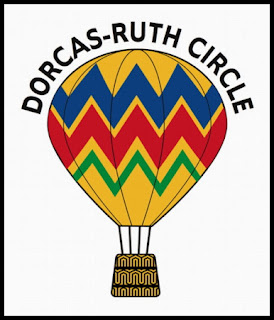 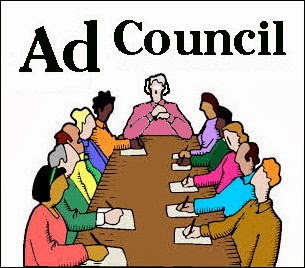 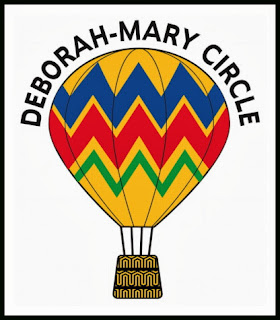 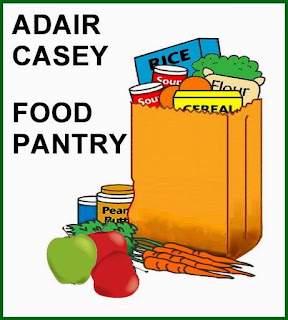 Pastor Melodee is taking vacation this next
week.  Rev. Melissa Drake will cover her
obligations. 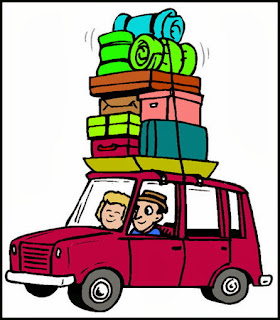 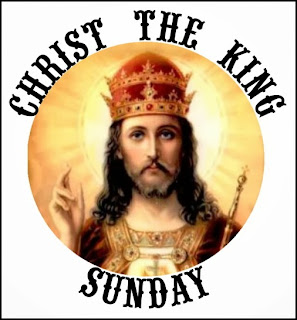 Today is United Methodist Student Day
(We have an offering). 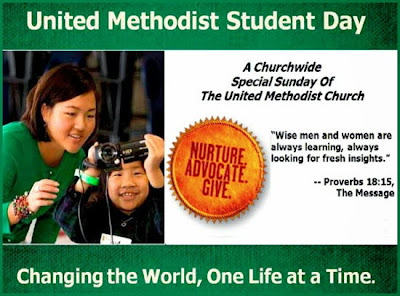 THIS IS NATIONAL BIBLE SUNDAY. 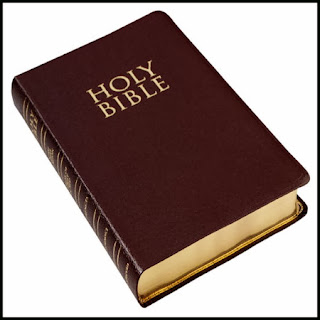 In the United States it is annually observed
the week from Sunday to Sunday during
Thanksgiving week.
It has been so observed since 1941 when
President Franklin D. Roosevelt issued
the first national proclamation.
According to Wikipedia, the Bible persists in
being the best-selling book of all time.
It is estimated to have sold between five
and six billion copies world wide.
The emphasis in the local church is always
to encourage reading and studying the
Bible and learning the bible's history and
content. One of Wesley's hymns asks God
to give us eyes to read and ears to hear
the "mystic words," so that we may grasp
and obey them . . . . . so that we will be
blessed and reign triumphantly with God.
That hymn is "Come, Divine Interpreter",
number 594 in our hymnal.
Other favorite songs about the bible are
"Blessed Jesus, at Thy Word", page 596,
"Wonderful Words of Life", page 600, and
"Thy Word Is a Lamp Unto My Feet",
page 601.
————————————————————
JEREMIAH 23:1-6
THE MESSAGE (MSG)
God rejects the bad shepherds (kings) of
Israel/Judah who scatter the flock. God
promises to raise up good kings and a
branch in the line of David to rule in
righteousness.
AN AUTHENTIC DAVID BRANCH
1-4 "Doom to the shepherd-leaders who
butcher and scatter my sheep!" God's
Decree. "So here is what I, God, Israel's
God, say to the shepherd-leaders who
misled my people: 'You've scattered my
sheep. You've driven them off. You have
not kept your eye on them. Well, let me
tell you, I'm keeping my eye on you,
keeping track of your criminal behavior.
I'll take over and gather what's left of my
sheep, gather them in from all the lands
where I've driven them. I'll bring them
back where they belong, and they'll
recover and flourish. I'll set shepherd-
leaders over them who will take good
care of them. They won't live in fear or
panic anymore. All the lost sheep will
be rounded up!' God's Decree." 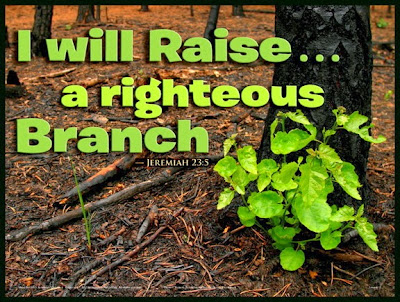 A ruler who knows how to rule justly.
He'll make sure of justice and keep
people united.
In his time Judah will be secure again
and Israel will live in safety.
This is the name they'll give him:
'God-Who-Puts-Everything-Right.'
————————————————————
LUKE 1:68-79 (UMH 208)
THE MESSAGE (MSG)
THE SONG OF ZECHARIAH
67-79 Then Zechariah was filled with the
Holy Spirit and prophesied,
Blessed be the Lord, the God of Israel;
he came and set his people free.
He set the power of salvation in the
center of our lives,
and in the very house of David his
servant,
Just as he promised long ago
through the preaching of his holy
prophets:
Deliverance from our enemies
and every hateful hand;
Mercy to our fathers,
as he remembers to do what he said
he'd do,
What he swore to our father Abraham—
a clean rescue from the enemy camp,
So we can worship him without a care in
the world,
made holy before him as long as we
live. 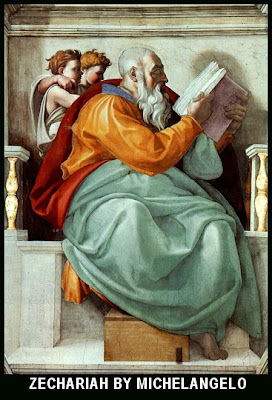 And you, my child, "Prophet of the
Highest,"
will go ahead of the Master to prepare
his ways,
Present the offer of salvation to his
people,
the forgiveness of their sins.
Through the heartfelt mercies of our God,
God's Sunrise will break in upon us,
Shining on those in the darkness,
those sitting in the shadow of death,
Then showing us the way, one foot at a
time, down the path of peace.
————————————————————
COLOSSIANS 1:11-20
THE MESSAGE (MSG)
A HYMN OF PRAISE TO CHRIST THE
KING OF ALL.
9-12 Be assured that from the first day we
heard of you, we haven't stopped praying
for you, asking God to give you wise
minds and spirits attuned to his will, and
so acquire a thorough understanding of
the ways in which God works. We pray
that you'll live well for the Master, making
him proud of you as you work hard in his
orchard. As you learn more and more how
God works, you will learn how to do your
work. We pray that you'll have the strength
to stick it out over the long haul—not the
grim strength of gritting your teeth but the
glory-strength God gives. It's strength that
endures the unendurable and spills over
into joy, thanking the Father who makes
us strong enough to take part in every-
thing bright and beautiful that he has for
us.

13-14 God rescued us from dead-end
alleys and dark dungeons. He's set us up
in the kingdom of the Son he loves so
much, the Son who got us out of the pit we
were in, got rid of the sins we were
doomed to keep repeating.
CHRIST HOLDS IT ALL TOGETHER
15-18 We look at this Son and see the God
who cannot be seen. We look at this Son
and see God's original purpose in every-
thing created. For everything, absolutely
everything, above and below, visible and
invisible, rank after rank after rank of
angels—everything got started in him and
finds its purpose in him. He was there be-
fore any of it came into existence and
holds it all together right up to this
moment. And when it comes to the church,
he organizes and holds it together, like a
head does a body.

18-20 He was supreme in the beginning
and—leading the resurrection parade—he
is supreme in the end. From beginning to
end he's there, towering far above every-
thing, everyone. So spacious is he, so
roomy, that everything of God finds its
proper place in him without crowding. Not
only that, but all the broken and dislocated
pieces of the universe—people and things,
animals and atoms—get properly fixed and
fit together in vibrant harmonies, all be-
cause of his death, his blood that poured
down from the cross.
————————————————————
LUKE 23:33-43
THE MESSAGE (MSG)
We come to the execution of Jesus. At the
core of conversations around the cross,
as Luke records it, is a discussion about
what it means to be "King of the Jews."
The crowds jeer at him to save himself.

33 When they got to the place called Skull
Hill, they crucified him, along with the
criminals, one on his right, the other on his
left. 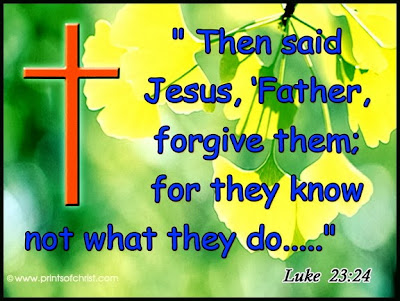 Dividing up his clothes, they threw dice for
them. 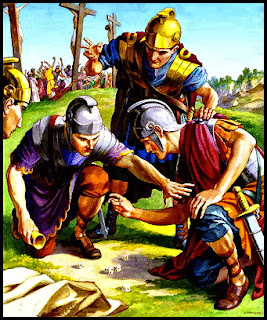 The people stood there staring at Jesus,
and the ringleaders made faces, taunting,
"He saved others. Let's see him save
himself! The Messiah of God—ha!
The Chosen—ha!"

36-37 The soldiers also came up and
poked fun at him, making a game of it.
They toasted him with sour wine: "So
you're King of the Jews! Save yourself!"

38 Printed over him was a sign: this is the
king of the jews.

39 One of the criminals hanging alongside
cursed him: "Some Messiah you are! Save
yourself! Save us!"

40-41 But the other one made him shut up:
"Have you no fear of God? You're getting
the same as him. We deserve this, but not
him—he did nothing to deserve this."

42 Then he said, "Jesus, remember me
when you enter your kingdom." 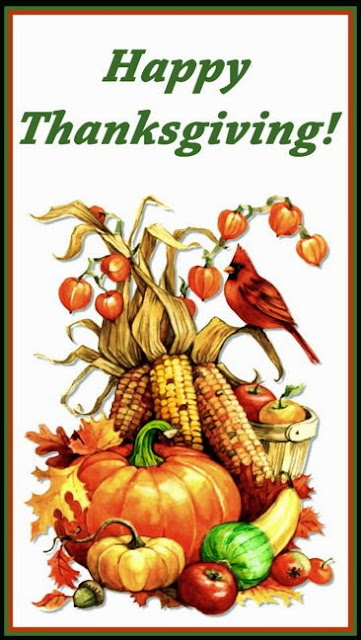