— REMINDERS —
• This is Native American Heritage Month.
The United States of America is the most
culturally diverse nation on earth. People
from all over the world have come together
to form this population. We must not forget
that there were native Americans here
before any of our European ancestors ever
set foot on the beach. 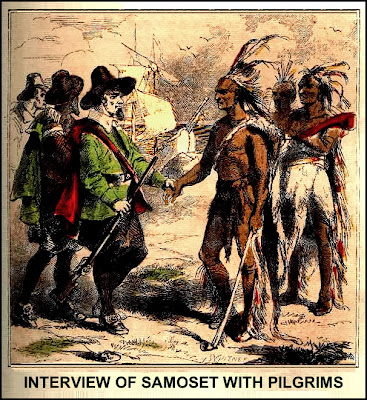 An interesting addition to what is almost
common knowledge is by Alvin Powell,
Harvard University:
• The Americas’ first human settlers arrived
in a complex series of migrations, pushing
over the ancient land bridge from Asia at
least three times - but they were moving in
both directions, with at least one group
scrapping it all and taking themselves and
their genetic signature back home to Asia.

• Research conducted by an international
team led by scientists from Harvard
University and University College of London
illuminates the roots of today’s Native
Americans through genetic analysis and by
comparison with native groups in Siberia.
The results, published in the July 11 issue
of the journal “Nature,” examined genetic
data from 52 Native American groups and
17 Siberian groups, and helped settle a
debate among anthropologists on whether
the Americas were settled once or many
times. Results show that multiple waves
of settlers arrived on our continental shore
from Asia, and some groups changed their
minds, reversed direction, and went back
over the land bridge to Asia.
• The work made no findings about the
timing of settlements, but prior research
indicates that the first humans reached
North America some 15,000 years ago
when the massive glaciers of the last ice
age locked up enough water to lower sea
levels and expose a 1,000-mile-wide land
bridge between Siberia and Alaska.
• The current research, led by David Reich,
professor of genetics at Harvard Medical
School, shows that the majority of the
genetic signatures of today’s Native
Americans come from an initial migration
during which people, termed “The First
Americans” by the researchers, pushed
south along the Pacific Coast from Alaska
clear down to the tip of South America.
• Today’s Alaskan Aleut-Inuit populations
owe half of their genetic background to a
second migration.
• The third migration contributed about
10 percent of the genetic background of
Canada’s Chipewya people, who are
concentrated today around Hudson Bay.
The work has been complicated by many
genetic changes in native peoples since
about 1492, when the continents’
settlement by Europeans began.
————————————————————
• One of the first proponents of “American
Indian Day” was Dr. Arthur C. Parker, a
Seneca Indian, who was the director of the
Museum of Arts and Science in Rochester,
N.Y.   He persuaded the Boy Scouts of
America to set aside a day for the "First
Americans" and for three years they did
adopt such a day.  In 1915, the annual
Congress of the American Indian Assoc.
met in Lawrence, Kansas and formally
approved a plan for American Indian Day.
It directed its president, Rev. Sherman
Coolidge, an Arapahoe, to call upon the
country to observe such a day.
• A year before a proclamation was issued,
Red Fox James, a Blackfoot Indian, rode
horseback from state to state seeking an
approval for a day to honor Indians. There
have been various days proclaimed at
various times, but it had continued to be
observed without any recognition as a
national legal holiday.
Recently in 1990 President George H. W.
Bush did approve a joint resolution to
designate November "National American
Indian Heritage Month."
"Native American Heritage Month" and
"National American Indian and Alaska
Native Heritage Month" have been issued
every year since 1994. 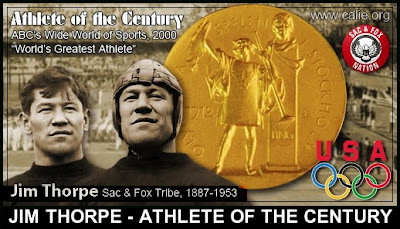 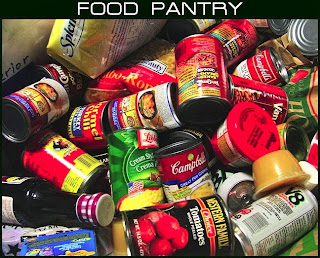 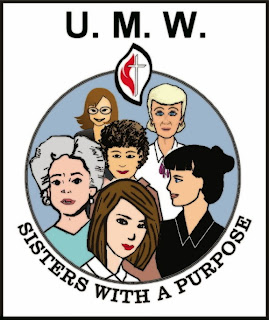 • INTERNATIONAL DAY OF PRAYER for
Persecuted Christians is observed today.

We conclude the four-week series called
"After the Aftermath" today with Isaiah’s
vision of all things made new.
• Observing our efforts all these years have
brought some progress toward some goals,
but the gap between rich and poor is worse,
we still have an intolerably high number of
people dying daily of preventable diseases,
and our capacity to destroy considerable
life on this planet by bombs and our own
environmental neglect seems to have
increased rather than decreased.
Yet for Jews and Christians, it leads to a
committed and living hope.
It calls people to participate in the healing
of the world, in whatever ways we can—
from simple acts of mercy to others, to
political action for promoting social,
economic and environmental change.

A prophecy of an entirely new world order
inaugurated by God in which infant
mortality is ended, everyone works and
enjoys the fruit of his/her labor, and "They
shall not hurt or destroy on all my holy
mountain."
NEW HEAVENS AND A NEW EARTH
17-25 "Pay close attention now:
I'm creating new heavens and a new
earth.
All the earlier troubles, chaos, and pain
are things of the past, to be forgotten.
Look ahead with joy.
Anticipate what I'm creating:
I'll create Jerusalem as sheer joy,
create my people as pure delight.
I'll take joy in Jerusalem,
take delight in my people:
No more sounds of weeping in the city,
no cries of anguish;
No more babies dying in the cradle,
or old people who don't enjoy a full
lifetime;
One-hundredth birthdays will be
considered normal—
anything less will seem like a cheat.
They'll build houses
and move in.
They'll plant fields
and eat what they grow.
No more building a house
that some outsider takes over,
No more planting fields
that some enemy confiscates,
For my people will be as long-lived as
trees,
my chosen ones will have satisfaction in
their work.
They won't work and have nothing come
of it,
they won't have children snatched out
from under them.
For they themselves are plantings blessed
by God,
with their children and grandchildren
likewise God-blessed.
Before they call out, I'll answer.
Before they've finished speaking, I'll
have heard.
Wolf and lamb will graze the same
meadow,
lion and ox eat straw from the same
trough,
but snakes—they'll get a diet of dirt!
Neither animal nor human will hurt or kill
anywhere on my Holy Mountain," says
God.
————————————————————
PSALM 118 (UMH 839)
THE MESSAGE (MSG)
Thank God because he's good, because
his love never quits.
Tell the world, Israel,
"His love never quits."
And you, clan of Aaron, tell the world,
"His love never quits."
And you who fear God, join in,
"His love never quits."

17-20  I didn't die. I lived!
And now I'm telling the world what God
did.
God tested me, he pushed me hard,
but he didn't hand me over to Death.
Swing wide the city gates—the righteous
gates!
I'll walk right through and thank God!
This Temple Gate belongs to God,
so the victors can enter and praise.

21-25  Thank you for responding to me;
you've truly become my salvation!
The stone the masons discarded as
flawed
is now the capstone!
This is God's work.
We rub our eyes—we can hardly
believe it!
This is the very day God acted—
let's celebrate and be festive!
Salvation now, God. Salvation now!
Oh yes, God—a free and full life!

Paul instructs Christians in Thessalonica
on the importance of work and avoiding
being idle, whether they be rich or poor.
Apparently, by at least some in the new
Christian community in Thessalonica,
work had come to be considered only an
option, and more of a burden than a
blessing. Paul rebukes that tendency
directly by saying:
"Whoever doesn’t work doesn’t eat"  It
was directed to those who chose lives of
"idleness," becoming "mere busybodies".
This is a searing Christian critique of one
of the ideals of Greek culture — the value
and esteem for the "leisure class."

U.S. and Western cultures generally are
not out to threaten your safety or destroy
your body. They are nonetheless out to
capture your desire for their products, for
their services,for their political, social,
economic agendas all for the sake of their
gain, not for the common good or in
witness to God’s kingdom.
The world doesn’t need to persecute us to
stop us. It only needs to divert us.
It can . . . and it does . . . all the time. 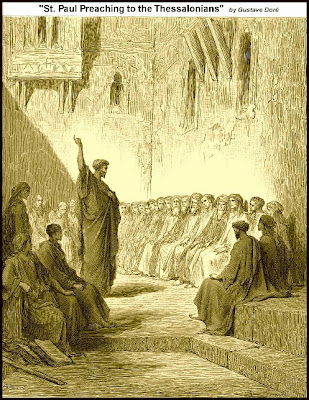 6-9 Our orders—backed up by the Master,
Jesus—are to refuse to have anything to
do with those among you who are lazy and
refuse to work the way we taught you.
Don't permit them to freeload on the rest.
We showed you how to pull your weight
when we were with you, so get on with it.
We didn't sit around on our hands
expecting others to take care of us. In fact,
we worked our fingers to the bone, up half
the night moonlighting so you wouldn't be
burdened with taking care of us. And it
wasn't because we didn't have a right to
your support; we did. We simply wanted to
provide an example of diligence, hoping it
would prove contagious.

10-13 Don't you remember the rule we had
when we lived with you? "If you don't work,
you don't eat." And now we're getting
reports that a bunch of lazy good-for-
nothings are taking advantage of you. This
must not be tolerated. We command them
to get to work immediately—no excuses,
no arguments—and earn their own keep.
Friends, don't slack off in doing your duty.
————————————————————
LUKE 21:5-19
THE MESSAGE (MSG)

Jesus foretells of the destruction of the
Temple, warns against being misled by
alarmists, and anticipates dreadful times
in which his followers must bear witness
and will be given words, wisdom, and
power to endure by the Holy Spirit.
WATCH FOR DOOMSDAY DECEIVERS
5-6 One day people were standing around
talking about the Temple, remarking how
beautiful it was, the splendor of its stone
work and memorial gifts. Jesus said, "All
this you're admiring so much—the time is
coming when every stone in that building
will end up in a heap of rubble."

7 They asked him, "Teacher, when is this
going to happen? What clue will we get
that it's about to take place?"

8-9 He said, "Watch out for the doomsday
deceivers. Many leaders are going to show
up with forged identities claiming, 'I'm the
One,' or, 'The end is near.' Don't fall for any
of that. When you hear of wars and up-
risings, keep your head and don't panic.
This is routine history and no sign of the
end."

10-11 He went on, "Nation will fight nation
and ruler fight ruler, over and over. Huge
earthquakes will occur in various places.
There will be famines. You'll think at times
that the very sky is falling.

12-15 "But before any of this happens,
they'll arrest you, hunt you down, and drag
you to court and jail. It will go from bad to
worse, dog-eat-dog, everyone at your throat
because you carry my name. You'll end up
on the witness stand, called to testify. Make
up your mind right now not to worry about
it. I'll give you the words and wisdom that
will reduce all your accusers to stammers
and stutters. 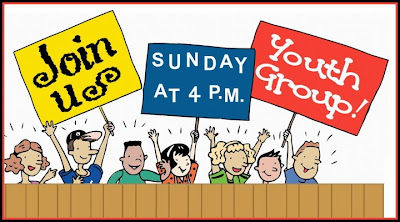 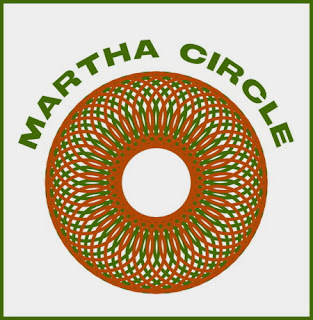 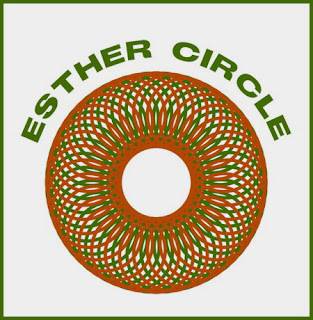 ————————————————————
• 1794 - Britain's King George III signed the
Jay Treaty to resolve the issues left over
from the Revolutionary War.
• 1863 - U.S. President Lincoln delivered his
Gettysburg Address as he dedicated a
national cemetery at the site of a Civil War
battlefield in Pennsylvania.
• 1997 - In Carlisle, Iowa, septuplets were
born to the McCaughey family.  The first
septuplets to survive infancy.
This picture shows them at 12 years old
with their older sister.
This year they will be 16. 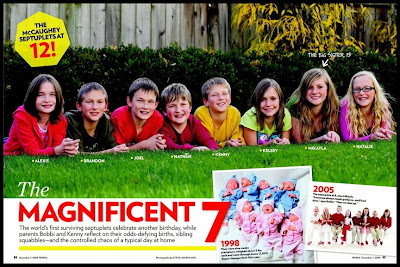 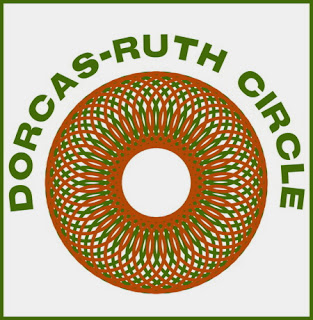 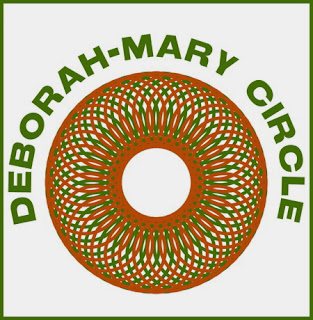 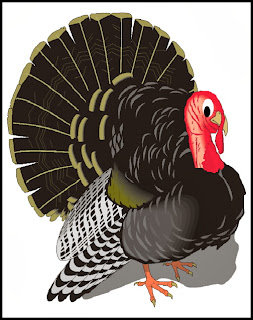 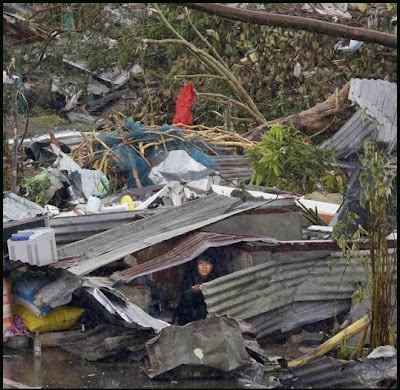 A woman insists on staying in her house. 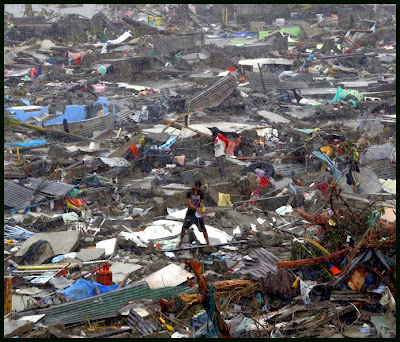