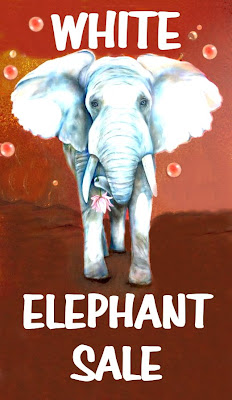 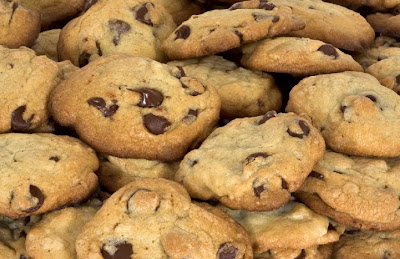 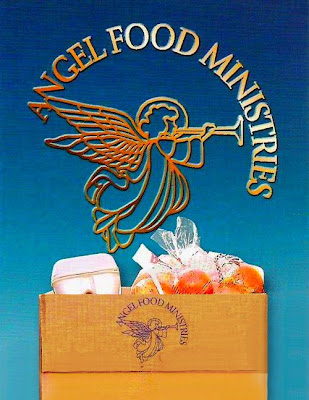 SUNDAY, APRIL 19TH —
Second Sunday of Easter
Our colors can be white or gold.
The gospel reading for the Second Sunday
of Easter is always focused on two elements:
the appearance of the Risen Lord to the
disciples on the night of his resurrection
and his "ordination" of them to their ministries
of forgiving sins, plus the curious absence
of Thomas the first Sunday night and his
presence awaiting a similar revelation for
himself the following Sunday night. 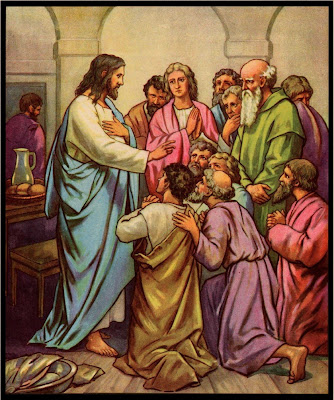 ACTS 4:32-35 (Amplified Bible)
THE HOLY CHARITY OF CHRISTIANS.
The disciples loved one another. This was
the blessed fruit of Christ's dying precept
to his disciples, and his dying prayer for
them. No marvel that they were of one
heart and soul, when they sat so loose to
the wealth of this world.
32 Now the company of believers was of
one heart and soul, and not one of them
claimed that anything which he possessed
was exclusively his own, but everything
they had was in common for the use of all.

33 And with great strength and ability and
power the apostles delivered their testimony
to the resurrection of the Lord Jesus, and
great grace (loving-kindness and favor and
goodwill) rested richly upon them all.

34 Nor was there a destitute or needy person
among them, for as many as were owners of
lands or houses proceeded to sell them, and
one by one they brought back the amount
received from the sales

35 And laid it at the feet of the apostles. Then
distribution was made according as anyone
had need.

PSALM 133 (UMH 850)
(New International Version) (NIV)
A psalm that celebrates the unity of those
who share spiritual life together. We cannot
say too much, to persuade people to live
together in peace. It is good for us, good
for our honor and comfort; and brings
constant delight to those who live in unity.

A SONG OF ASCENTS.
1 How good and pleasant it is
when brothers live together in unity! 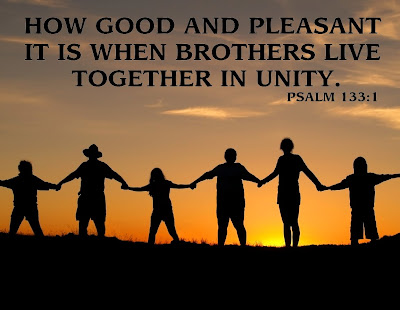 3 It is as if the dew of Hermon
were falling on Mount Zion.
For there the LORD bestows his blessing,
even life forevermore.

1 JOHN 1:1-2:2 (New Century Version)
More signs of the presence of the risen Lord
in our midst: honest confession, assurance
of God's forgiveness, and lives where sin's
power is being overcome.

The apostles had seen Him while they
witnessed his wisdom and holiness, his
miracles, and love and mercy, during some
years, till they saw him crucified for sinners,
and afterwards risen from the dead. They
touched him,so as to have full proof of his
resurrection. The apostles declared what they
had seen and heard, that believers might
share their comforts and everlasting
advantages. They had free access to God
the Father.

Love One Another
1 We write you now about what has always
existed, which we have heard, we have seen
with our own eyes, we have looked at, and
we have touched with our hands. We write
to you about the Word that gives life.

2 He who gives life was shown to us. We
saw him and can give proof about it. And
now we announce to you that he has life
that continues forever. He was with God the
Father and was shown to us.

3 We announce to you what we have seen
and heard, because we want you also to have
fellowship with us. Our fellowship is with God
the Father and with his Son, Jesus Christ.

4 We write this to you so we may be full of joy.

GOD FORGIVES OUR SINS
5 Here is the message we have heard from
Christ and now announce to you: God is light,
and in him there is no darkness at all.

6 So if we say we have fellowship with God,
but we continue living in darkness, we are
liars and do not follow the truth.

7 But if we live in the light, as God is in the
light, we can share fellowship with each other.
Then the blood of Jesus, God's Son, cleanses
us from every sin.

8 If we say we have no sin, we are fooling
ourselves, and the truth is not in us.

9 But if we confess our sins, he will forgive
our sins, because we can trust God to do
what is right. He will cleanse us from all the
wrongs we have done.

10 If we say we have not sinned, we make
God a liar, and we do not accept God's teaching.

1 John 2:1 & 2
JESUS IS OUR HELPER
1 My dear children, I write this letter to you
so you will not sin. But if anyone does sin,
we have a helper in the presence of the
Father—Jesus Christ, the One who does
what is right.

2 He died in our place to take away our sins,
and not only our sins but the sins of all people.

JOHN 20:19-31 (New International Reader's Version)
In his resurrection appearances Jesus
continues to reveal the glory of God by
manifesting the grace and love that
characterize God. This love is seen in the
gentleness, care and humility with which
he shows his disciples. To help Thomas
believe, Jesus showed him his real scars
and invited him to touch them.

JESUS APPEARS TO HIS DISCIPLES
19 On the evening of that first day of the
week, the disciples were together. They
had locked the doors because they were
afraid of the Jews. Jesus came in and
stood among them. He said, "May peace
be with you!"

20 Then he showed them his hands and
his side. The disciples were very happy
when they saw the Lord.

21 Again Jesus said, "May peace be with
you! The Father has sent me. So now I am
sending you."

22 He then breathed on them. He said,
"Receive the Holy Spirit.

23 If you forgive anyone's sins, they are
forgiven. If you do not forgive them, they
are not forgiven."

Jesus Appears to Thomas
24 Thomas was one of the Twelve. He was
called Didymus. He was not with the other
disciples when Jesus came.

25 So they told him, "We have seen the
Lord!" But he said to them, "First I must
see the nail marks in his hands. I must
put my finger where the nails were. I must
put my hand into his side. Only then will I
believe what you say."

26 A week later, Jesus' disciples were in the
house again. Thomas was with them. Even
though the doors were locked, Jesus came
in and stood among them. He said,
"May peace be with you!" 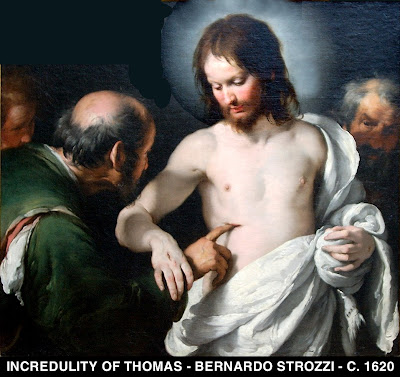 27 Then he said to Thomas, "Put your finger
here. See my hands. Reach out your hand
and put it into my side. Stop doubting and
believe."

29 Then Jesus told him, "Because you have
seen me, you have believed. Blessed are
those who have not seen me but still have
believed."

30 Jesus did many other miraculous signs
in front of his disciples. They are not written
down in this book.

Tulip - The flower and its name originated in the
Persian Empire. It is a flower indigenous to Iran,
Afghanistan, and Turkey. It comes through the
ground while it is still cold - often through snow -
and so has become a symbol of rebirth and new life. 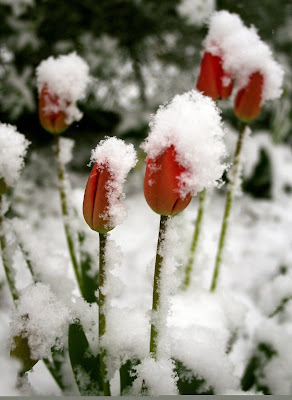 From TULIPMANIA
by Anne Goldgar
Since the mid 1600's, tulips have come to
symbolize economic bubbles. Excess demand
for the floral beauties led Dutchmen to pay an
exorbitant price, resulting in the "tulip mania"
of the early 17th century.

Tulip Mania was a period in the Dutch Golden
Age during which contract prices for Tulip Bulbs
of the recently introduced tulips reached
extraordinarily high levels and then suddenly
collapsed. At the peak of tulip mania in February
1637, tulip contracts sold for more than 10 times
the annual income of a skilled craftsman. It is
generally considered the first recorded speculative
bubble. The term "tulip mania" is often used
metaphorically to refer to a large economic bubble.

In the mid-1630's, Holland famously went wild
about tulips. Tulips very new and very rare, became
much sought after by collectors after their discovery.
In the period around the summer of 1636 prices rose
to enormous heights. People reasoned the price of
tulips would be significantly higher a week or two
after they bought the bulbs, so they would make
a significant profit. (Sound familiar?) Many did make
enormous profits off of this craze in the beginning.
People began quitting their jobs to become tulip
"day traders." By January of 1637, some rare tulip
bulbs were fetching prices equivalent to over
$100,000 in today's dollars.

One commentator wrote in January, 1637,
"No one speaks, asks about, or talks of anything
but Tulips; they have their heads so full of it, they
neither think, or dream of anything else."

Since the bulbs were in the ground most of the
year, sales were made in the form of futures
contracts for future payment and future delivery.
Early in February, 1637, the bottom fell out of
the market. Buyers could not pay and sellers
were left holding the bulbs.
(Perhaps the first depression?)

From The Historian ——
"Obviously, the market could not sustain this
frenzied activity forever. The tulip market had
quickly become overbought and had stayed
that way. As all markets must do at some point,
the tulip market corrected itself. As a result,
the bottom fell out of the tulip market. After the
Tulip Crash, the price of tulips was less than 1%
of what it had been before the crash. The Dutch
who had invested heavily in tulips lost everything.
Others saw all of their paper profits wiped out.
They had indeed made money in tulips, but they
had waited too long to cash in. A few savvy people
had foreseen the collapse of the tulip market and
had gotten out in time. Some individuals made
enormous profits from the short term irrationality
of the market . . . most did not." 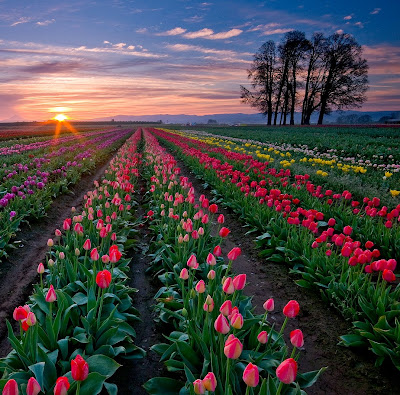 Today the tulip is a reminder of Easter, new life, rebirth,
windmills, clogs, and the arrival of spring. Who would
be silly enough to think of the tulip as the pivot of a
financial crisis? Who indeed?

So, if you thought market corrections were something
new, they have been around for centuries. The curious
thing is we still think the market will build ad infinitum -
and my guess is our children will think that too.