REMINDERS — Pastor Lynn will be attending "JOY" camp to be held July 28 to August 1, 2008. The camp name is "Golden Valley" and is located just outside Lockridge, Iowa, which is down in the southeast corner of the state near Mount Pleasant. Golden Valley is nestled in the hills northeast of Lockridge, Iowa on 296 acres of woodland. 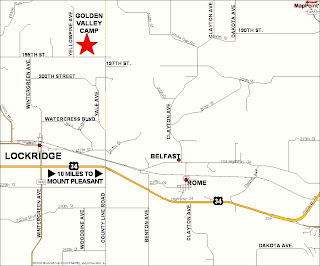 • • • Click on the images and they will expand to full size.
I will be here for one week helping with a camp sponsored by Mobil United Methodist Missionaries. The kids attending this camp will be grades 3-5 and grades 6-8th. If I need to come back from camp, I believe I can do that but since camp is in the southeast corner of the state it would take 3 - 4 hours.
In case of emergency, Pastor Chuck Layton of Greenfield UMC and
Pastor Bonnie Peterson of Anita will be covering for me. 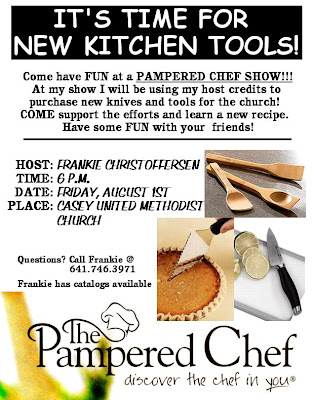 ~~~~~~~~~~~~~~~~~~~~~~~~~~~~~~~~~~~
Sunday, August 3rd — This is the 12th Sunday after Pentecost. Our color is green. Our Scripture Readings for today are:
Genesis 32:22-31: New International Version (NIV)
After a twenty year absence from his hometown, Jacob prepared himself for what could have been a volatile reunion with his brother, Esau, but instead he wrestles with God. Jacob wrestles with a "man" at the Jabbok and is renamed "Israel" because he has "striven with God and with humans, and has prevailed."
22 That night Jacob got up and took his two wives, his two maidservants and his eleven sons and crossed the ford of the Jabbok.

23 After he had sent them across the stream, he sent over all his possessions.

24 So Jacob was left alone, then a man wrestled with him until daybreak. 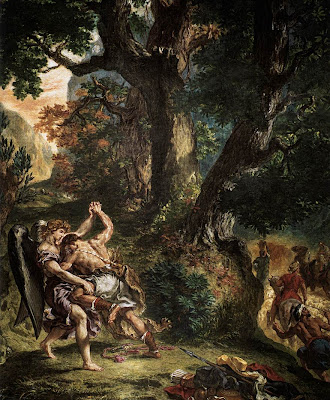 25 When the man saw that He could not overpower him, He touched the socket of Jacob's hip so that his hip was wrenched as he wrestled with the man.

26 Then the man said, "Let me go, for it is daybreak." But Jacob replied, "I will not let you go unless you bless me."

27 The man asked him, "What is your name?" "Jacob," [which means supplanter, schemer, trickster, swindler] he answered.

28 Then the man said, "Your name will no longer be Jacob, but "Israel", because you have struggled with God and with men and have overcome."

29 Jacob said, "Please tell me your name." But He replied, "Why do you ask my name?" Then He blessed him there.

30 So Jacob called the place Peniel, saying, "It is because I saw God face to face, and yet my life was spared."

2 Let my sentence of vindication come from You! May Your eyes behold the things that are just and upright.

3 You have proved my heart; You have visited me in the night; You have tried me and find nothing [no evil purpose in me]; I have purposed that my mouth shall not transgress.

4 Concerning the works of men, by the word of Your lips I have avoided the ways of the violent (the paths of the destroyer).

5 My steps have held closely to Your paths [to the tracks of the One Who has gone on before]; my feet have not slipped.

6 I have called upon You, O God, for You will hear me; incline Your ear to me and hear my speech.

7 Show Your marvelous loving-kindness, O You Who save by Your right hand those who trust and take refuge in You from those who rise up against them.
~~~~~~~~~~~~~~~~~~~~~~~~~~~~~~~~~~~
Romans 9:1-5 (Contemporary English Version)
Paul, the apostle to the Gentiles, declares his great concern and anguish for his people, the Israelites.
God's Choice of Israel
1 I am a follower of Christ, and the Holy Spirit is a witness to my conscience. So I tell the truth and I am not lying when I say 2 my heart is broken and I am in great sorrow.

3 I would gladly be placed under God's curse and be separated from Christ for the good of my own people.

4 They are the descendants of Israel, and they are also God's chosen people. God showed them his glory. He made agreements with them and gave them his Law. The temple is theirs and so are the promises that God made to them. 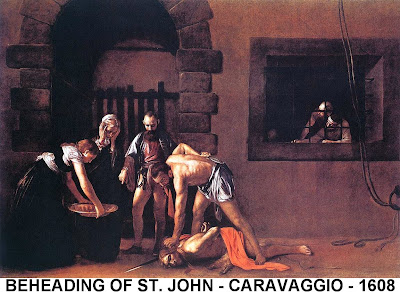 13 When Jesus heard this, He withdrew from there privately in a boat to a solitary place. But when the crowds heard of it, they followed Him [by land] on foot from the towns.

14 When He went ashore and saw a great throng of people, He had compassion (pity and deep sympathy) for them and cured their sick.

15 When evening came, the disciples came to Him and said, This is a remote and barren place, and the day is now over; send the throngs away into the villages to buy food for themselves.

16 Jesus said, They do not need to go away; you give them something to eat.

17 They said to Him, We have nothing here but five loaves and two fish. 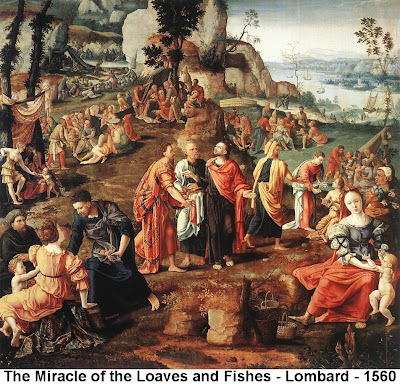 19 Then He ordered the crowds to recline on the grass; and He took the five loaves and the two fish, and, looking up to heaven, He gave thanks and blessed and broke the loaves and handed the pieces to the disciples, and the disciples gave them to the people.

20 And they all ate and were satisfied. And they picked up twelve baskets full of the broken pieces left over.

Those who are younger could be accepted by discussing the possibility with Pastor Lynn before the class begins. Adults who would be interested in learning more about their faith traditions are also welcome to participate.
~~~~~~~~~~~~~~~~~~~~~~~~~~~~~~~~~~~
As folks prepare for a new school year, please invite them to consider purchasing items for the "School Kit" for Ingathering that will be held on the first Saturday in November. Sales are on and quantity purchases help when we put kits together. Check the "Ingathering" Book for the list of items needs - there have been some changes.
~~~~~~~~~~~~~~~~~~~~~~~~~~~~~~~~~~~
August 6th marks the 63rd anniversary of the bombing of Hiroshima and, three days later, Nagasaki. It is a solemn observance, much like our own Memorial Day remembrance. We say never again . . . . . but we forget. 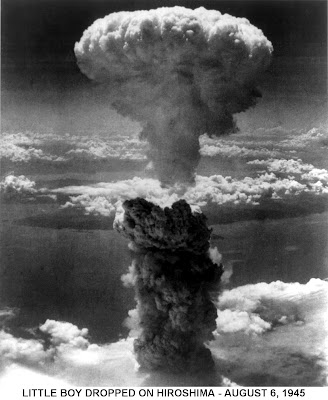 U.S. airman Matthew McGunigle photographed the Hiroshima blast. After the war, he entered a monastery and took a vow of silence. 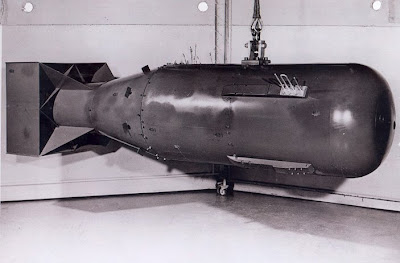 More people now on the earth were born after the tragic moment in 1945, than were alive at the time of the atomic blast. Authors, historians, politicians, photographers, artists, and theologians entered into a disturbing landscape — a landscape that mushroomed up sixty years ago and has continued as a threat to God's creation ever since. We must find peaceful, non aggressive ways to deal with disagreements, to express points of view, we must listen for the "still small voice" of the Spirit, and we must never appoint ourselves as gods.

The only obstacle to surrender had been the Truman administration’s insistence on unconditional surrender, which meant that the Emperor Hirohito, whom the Japanese regarded as a god, would be removed from his figurehead position in Japan - an intolerable demand for the Japanese. When we say "Never again", we must mean "Never Again."
~~~~~~~~~~~~~~~~~~~~~~~~~~~~~~~~~~~
I am out of contact with many of you, but I know you will continue to pull the cart. Thank you all for your contributions to our Christian life.
We will be back August 1st and begin regular office hours on August 5th.
God bless and keep you,
Pastor Lynn