REMINDERS — Pastor Lynn will be attending "JOY" camp to be held July 28 to August 1, 2008. The camp name is "Golden Valley" and is located just outside Lockridge, Iowa. There was an error alluding to Camp Joy in Golden Valley, Minnesota, but please be advised that is incorrect.

I will be there for one week helping with a camp sponsored by MUM's (Mobil United Methodist Missionaries). The kids attending this camp will be grades 3-5 and grades 6-8th.
In case of emergency, Pastor Chuck Layton of Greenfield UMC and Pastor Bonnie Peterson of Anita will be covering form me.
~~~~~~~~~~~~~~~~~~~~~~~~~~~~~~~~~~~
Sunday, July 27th — This is the 11th Sunday after Pentecost. Our color is green. Our Scripture Readings for today are:
Genesis 29:15-28
(Contemporary English Version) (CEV)
Jacob Marries Leah and Rachel
15 Laban said to him, "You shouldn't have to work without pay, just because you are a relative of mine. What do you want me to give you?"
16-17 Laban had two daughters. Leah was older than Rachel, but her eyes didn't sparkle, while Rachel was beautiful and had a good figure.
18 Since Jacob was in love with Rachel, he answered, "If you will let me marry Rachel, I'll work seven years for you."
19 Laban replied, "It's better for me to let you marry Rachel than for someone else to have her. So stay and work for me."
20 Jacob worked seven years for Laban, but the time seemed like only a few days, because he loved Rachel so much.
21 Jacob said to Laban, "The time is up, and I want to marry Rachel now!"
22 So Laban gave a big feast and invited all their neighbors.
23 But that evening he brought Leah to Jacob, who married her and spent the night with her.
24 Laban also gave Zilpah to Leah as her servant woman.
25 The next morning Jacob found out that he had married Leah, and he asked Laban, "Why did you do this to me? Didn't I work to get Rachel? Why did you trick me?"
26 Laban replied, "In our country the older daughter must get married first.
27 After you spend this week with Leah, you may also marry Rachel. But you will have to work for me another seven years."
28-30 At the end of the week of celebration, Laban let Jacob marry Rachel, and he gave her his servant woman Bilhah. Jacob loved Rachel more than he did Leah, but he had to work another seven years for Laban.

Psalm 105:1-11 (New International Version) (NIV)
1 Give thanks to the LORD, call on his name;
make known among the nations what he has done.
2 Sing to him, sing praise to him;
tell of all his wonderful acts.
3 Glory in his holy name;
let the hearts of those who seek the LORD rejoice.
4 Look to the LORD and his strength;
seek his face always.
5 Remember the wonders he has done,
his miracles, and the judgments he pronounced,
6 O descendants of Abraham his servant,
O sons of Jacob, his chosen ones.
7 He is the LORD our God;
his judgments are in all the earth.
8 He remembers his covenant forever,
the word he commanded, for a thousand generations,
9 the covenant he made with Abraham,
the oath he swore to Isaac.
10 He confirmed it to Jacob as a decree,
to Israel as an everlasting covenant:
11 "To you I will give the land of Canaan
as the portion you will inherit."
Psalm 105:45 (New International Version)
New International Version (NIV)
45 that they might keep his precepts
and observe his laws.
Praise the LORD.

Our Victory in Christ
26 In the same way the Spirit also helps our weakness; for we do not know how to pray as we should, but the Spirit Himself intercedes for us with groanings too deep for words;

27 and He who searches the hearts knows what the mind of the Spirit is, because He intercedes for the saints according to the will of God.

28 And we know that God causes all things to work together for good to those who love God, to those who are called according to His purpose.

29 For those whom He fore knew, He also predestined to become conformed to the image of His Son, so that He would be the firstborn among many brethren;

31 What then shall we say to these things? If God is for us, who is against us?

32 He who did not spare His own Son, but delivered Him over for us all, how will He not also with Him freely give us all things?

33 Who will bring a charge against God's elect? God is the one who justifies;

34 who is the one who condemns? Christ Jesus is He who died, yes, rather who was raised, who is at the right hand of God, who also intercedes for us.

35 Who will separate us from the love of Christ? Will tribulation, or distress, or persecution, or famine, or nakedness, or peril, or sword?

36 Just as it is written,
"FOR YOUR SAKE WE ARE BEING PUT TO DEATH ALL DAY LONG;
WE WERE CONSIDERED AS SHEEP TO BE SLAUGHTERED."

37 But in all these things we overwhelmingly conquer through Him who loved us.

38 For I am convinced that neither death, nor life, nor angels, nor principalities, nor things present, nor things to come, nor powers,

39 nor height, nor depth, nor any other created thing, will be able to separate us from the love of God, which is in Christ Jesus our Lord.

The Parables of the Mustard Seed and the Yeast
31 He told them another parable: "The kingdom of heaven is like a mustard seed, which a man took and planted in his field.
32 Though it is the smallest of all your seeds, yet when it grows, it is the largest of garden plants and becomes a tree, so that the birds of the air come and perch in its branches."
33 He told them still another parable: "The kingdom of heaven is like yeast that a woman took and mixed into a large amount[a] of flour until it worked all through the dough." 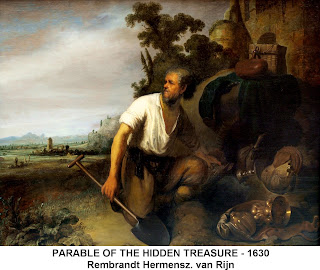 The Parables of the Hidden Treasure and the Pearl
44 "The kingdom of heaven is like treasure hidden in a field. When a man found it, he hid it again, and then in his joy went and sold all he had and bought that field.
45 "Again, the kingdom of heaven is like a merchant looking for fine pearls.
46 When he found one of great value, he went away and sold everything he had and bought it.
The Parable of the Net
47 "Once again, the kingdom of heaven is like a net that was let down into the lake and caught all kinds of fish.
48 When it was full, the fishermen pulled it up on the shore. Then they sat down and collected the good fish in baskets, but threw the bad away.
49 This is how it will be at the end of the age. The angels will come and separate the wicked from the righteous
50 and throw them into the fiery furnace, where there will be weeping and gnashing of teeth.
51 "Have you understood all these things?" Jesus asked.
"Yes," they replied.
52 He said to them, "Therefore every teacher of the law who has been instructed about the kingdom of heaven is like the owner of a house who brings out of his storeroom new treasures as well as old." 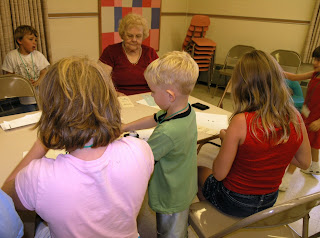 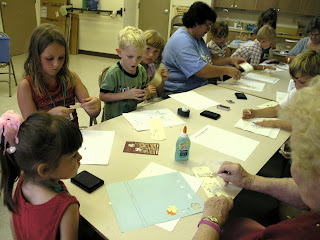 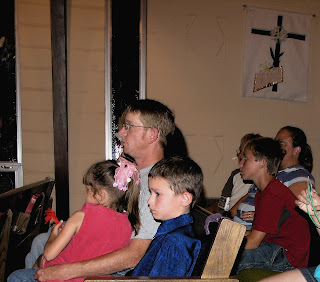 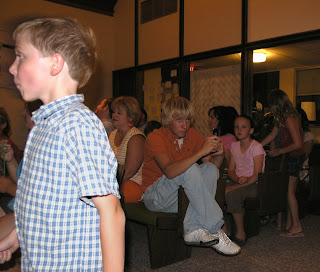 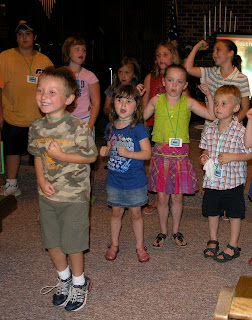 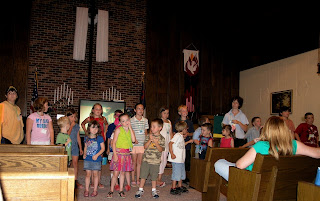 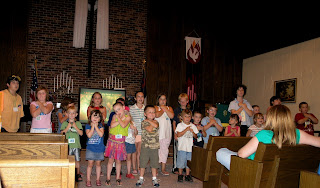 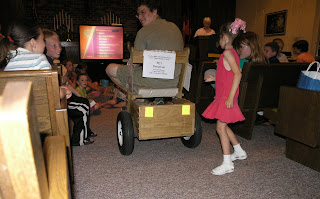 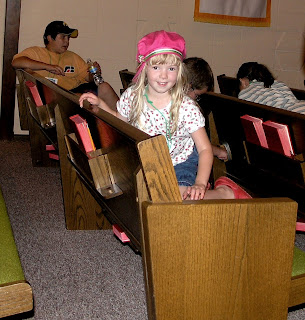 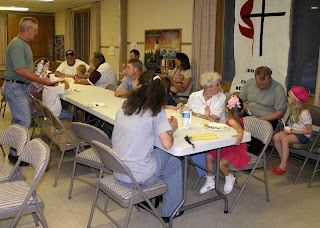 Thank you for oodles of hard work this week. Vacation Bible School was a resounding success, but it couldn't have happened without a good deal of help.
God Bless & Keep You,
Pastor Lynn
Posted by Pastor Melodee Carstens