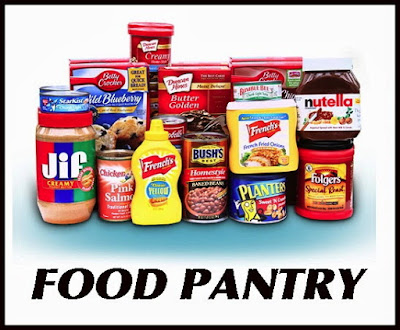 DAVIDS SIN AND SORROW
11 When that time of year came around
again, the anniversary of the Ammonite
aggression, David dispatched Joab and
his fighting men of Israel in full force to
destroy the Ammonites for good. They
laid siege to Rabbah, but David stayed
in Jerusalem. 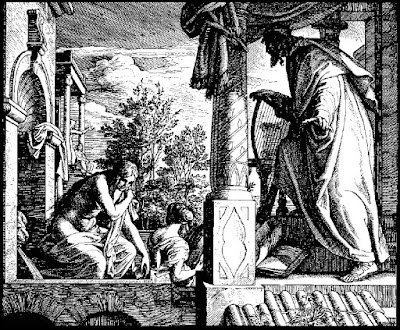 2-5 One afternoon, David got up from
taking his nap and was strolling on the
roof of the palace. From his vantage
point on the roof he saw a woman
bathing. The woman was stunningly
beautiful. David sent to ask about her,
and was told, “Isn’t this Bathsheba,
daughter of Eliam and wife of Uriah the
Hittite?” David sent his agents to get her.
After she arrived, he went to bed with
her.   (This occurred during the time of
“purification” following her period.) Then
she returned home. Before long she
realized she was pregnant.

6 David then got in touch with Joab:
“Send Uriah the Hittite to me.” Joab sent
him.

7-8 When he arrived, David asked him for
news from the front—how things were
going with Joab and the troops and with
the fighting. Then he said to Uriah, “Go
home. Have a refreshing bath and a
good night’s rest.”

8-9 After Uriah left the palace, an
informant of the king was sent after him.
But Uriah didn’t go home. He slept that
night at the palace entrance, along with
the king’s servants.

10 David was told that Uriah had not
gone home. He asked Uriah, “Didn’t you
just come off a hard trip? So why didn’t
you go home?”

11 Uriah replied to David, “The Chest is
out there with the fighting men of Israel
and Judah—in tents. My master Joab
and his servants are roughing it out in
the fields. So, how can I go home and
eat and drink and enjoy my wife? On
your life, I’ll not do it!”

12-13 “All right,” said David, “have it
your way. Stay for the day and I’ll send
you back tomorrow.” So Uriah stayed in
Jerusalem the rest of the day.

The next day David invited him to eat
and drink with him, and David got him
drunk. But in the evening Uriah again
went out and slept with his master’s
servants. He didn’t go home.

14-15 In the morning David wrote a letter
to Joab and sent it with Uriah. In the
letter he wrote, “Put Uriah in the front
lines where the fighting is the fiercest.
Then pull back and leave him exposed
so that he’s sure to be killed.”
———————————————————
PSALM 14 (UMH 746)
THE MESSAGE (MSG)
A cry for deliverance from corruption all around and a recognition that only God, and no mere mortal, can provide what is needed. 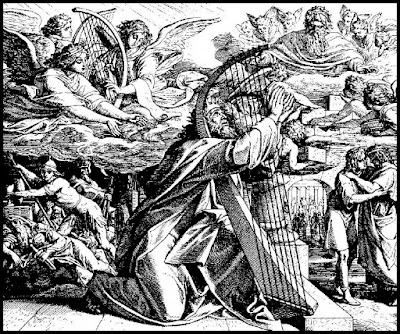 A PSALM OF DAVID
1 Bilious and bloated, they gas,
“God is gone.”
Their words are poison gas,
fouling the air; they poison
Rivers and skies;
thistles are their cash crop.

2 God sticks his head out of heaven.
He looks around.
He’s looking for someone not stupid—
one man, even, God-expectant,
just one God-ready woman.

3 He comes up empty. A string
of zeros. Useless, unshepherded
Sheep, taking turns pretending
to be Shepherd.
The ninety and nine
follow their fellow.

4 Don’t they know anything,
all these impostors?
Don’t they know
they can’t get away with this—
Treating people like a fast-food meal
over which they’re too busy to pray?

5-6 Night is coming for them, and
nightmares,
for God takes the side of victims.
Do you think you can mess
with the dreams of the poor?
You can’t, for God
makes their dreams come true.

7 Is there anyone around to save Israel?
Yes. God is around; God turns life
around.
Turned-around Jacob skips rope,
turned-around Israel sings laughter.
———————————————————
EPHESIANS 3:14-21
THE MESSAGE (MSG)
The reason that the writer bends the
knee before the Father is the revelation
of the mystery that God will use the
church as the means to make one new
humanity out of the two (Gentile and
Jew), verse 10. That is why he prays
that they may be "filled with all the
fullness of God" — that they may live
out the fullness of the calling to which
they have been called.
14-19 My response is to get down on my knees before the Father, this magnificent Father who parcels out all heaven and earth. I ask him to strengthen you by his Spirit—not a brute strength but a glorious inner strength—that Christ will live in you as you open the door and invite him in. And I ask him that with both feet planted firmly on love, you’ll be able to take in with all followers of Jesus the extravagant dimensions of Christ’s love. Reach out and experience the breadth! Test its length! Plumb the depths! Rise to the heights! Live full lives, full in the fullness of God.20-21 God can do anything, you know—far more than you could ever imagine or guess or request in your wildest dreams! He does it not by pushing us around but by working within us, his Spirit deeply and gently within us.Glory to God in the church!Glory to God in the Messiah, in Jesus!Glory down all the generations!Glory through all millennia! Oh, yes!
———————————————————
JOHN 6:1-21
THE MESSAGE (MSG)
This is John's version of the feeding of the 5000 and Jesus walking on the water to meet the disciples as they row in vain against wind and waves.
BREAD AND FISH FOR ALL
1-4 After this, Jesus went across the Sea
of Galilee (some call it Tiberias). A huge
crowd followed him, attracted by the
miracles they had seen him do among
the sick. When he got to the other side,
he climbed a hill and sat down,
surrounded by his disciples. It was
nearly time for the Feast of Passover,
kept annually by the Jews.
5-6 When Jesus looked out and saw that
a large crowd had arrived, he said to
Philip, “Where can we buy bread to feed
these people?” He said this to stretch
Philip’s faith. He already knew what he
was going to do.
7 Philip answered, “Two hundred silver
pieces wouldn’t be enough to buy bread
for each person to get a piece.”
8-9 One of the disciples—it was Andrew,
brother to Simon Peter—said, “There’s a
little boy here who has five barley loaves
and two fish. But that’s a drop in the
bucket for a crowd like this.”
10-11 Jesus said, “Make the people sit
down.” There was a nice carpet of green
grass in this place. They sat down, about
five thousand of them. Then Jesus took
the bread and, having given thanks, gave
it to those who were seated. He did the
same with the fish. All ate as much as
they wanted. 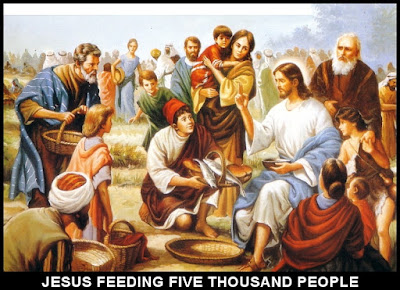 12-13 When the people had eaten their
fill, he said to his disciples, “Gather the
leftovers so nothing is wasted.” They
went to work and filled twelve large
baskets with leftovers from the five
barley loaves.
14-15 The people realized that God was
at work among them in what Jesus had
just done. They said, “This is the
Prophet for sure, God’s Prophet right
here in Galilee!” Jesus saw that in their
enthusiasm, they were about to grab him
and make him king, so he slipped off and
went back up the mountain to be by
himself.
16-21 In the evening his disciples went
down to the sea, got in the boat, and
headed back across the water to
Capernaum. It had grown quite dark and
Jesus had not yet returned. A huge wind
blew up, churning the sea. They were
maybe three or four miles out when they
saw Jesus walking on the sea, quite near
the boat. 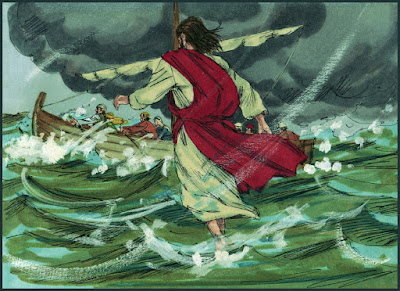 They were scared senseless, but hereassured them, “It’s me. It’s all right.
Don’t be afraid.” So they took him on
board. In no time they reached land—
the exact spot they were headed to.
———————————————————
• 1775 - A postal system is established
by the 2nd Continental Congress of the
United States. The very first Postmaster
General was Benjamin Franklin.
• 1788 - New York became the 11th state
to ratify the U.S. Constitution.
• 1881 - Thomas Edison and Patrick
Kenny execute a patent application for a
facsimile telegraph (U.S. Pat. 479,184).
• 1908 - U.S. Attorney General Charles J.
Bonaparte issued an order that created
an investigation agency that was a fore
runner of the FBI.
• 1945 - Winston Churchill resigned as
Britain's prime minister.
• 1947 - U.S. President Truman signed
The National Security Act. The act
created the National Security Council,
the Department of Defense, the Central
Intelligence Agency (CIA) and the Joint
Chiefs of Staff.
• 1948 - U.S. President Truman signed
executive orders that prohibited all
discrimination in the U.S. armed forces
and federal employment.
• 1953 - Fidel Castro began his revolt
against Fulgencio Batista with a failed
attack on an army barracks in eastern
Cuba. Castro eventually ousted Batista
six years later.
≈≈≈≈≈≈≈≈≈≈≈≈≈≈≈≈≈≈≈≈≈≈≈≈≈≈≈≈≈≈≈≈≈≈≈
MONDAY, JULY 27TH —
OFFICE IS CLOSED TODAY. 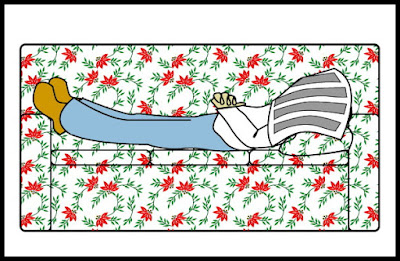 ———————————————————
• 1245 - Powerful Holy Roman Emperor
Frederick II was deposed by a council at
Lyons after they found him guilty of
sacrilege.
• 1663 - The British Parliament passed a
second Navigation Act, which required
all goods bound for the American
Colonies be sent in British ships from
British ports.
• 1775 - Benjamin Rush began service
as the first Surgeon General of the
Continental Army.
• 1777 - The Marquis of Lafayette arrived
in New England to help the rebellious
American colonists fight the British.
• 1804 - The 12th Amendment to the U.S.
Constitution was ratified. This amend-
ment directed Electors to vote for one
President and for a Vice-President
rather than two choices for President.
• 1909 - Orville Wright set a record for
the longest airplane flight. He was
testing the first Army airplane and kept
it in the air for 1 hour 12 minutes and
40 seconds.
• 1944 - U.S. troops completed liberation
of Guam.
• 1953 - The armistice agreement that
ended the Korean War was signed today
in Panmunjon, Korea.
• 1964 - U.S. President Lyndon Johnson
sent 5,000 advisers to South Vietnam.
• 1980 - The deposed shah of Iran,
Muhammad Riza Pahlavi, died in a
hospital near Cairo, Egypt.  He died from
complications of non-Hodgkins
Lymphoma.
• 1995 - Korean War Veterans Memorial
was dedicated in Washington, DC, by
U.S. President Clinton and South
Korean President Kim Young-sam. 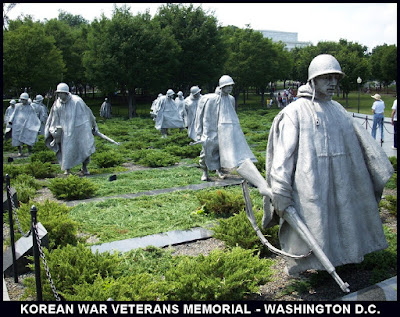 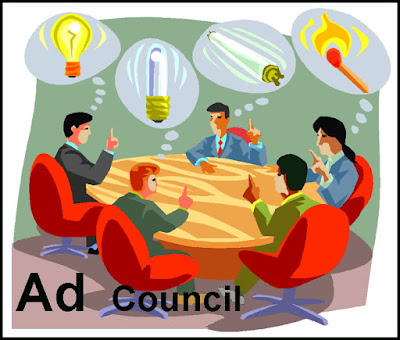 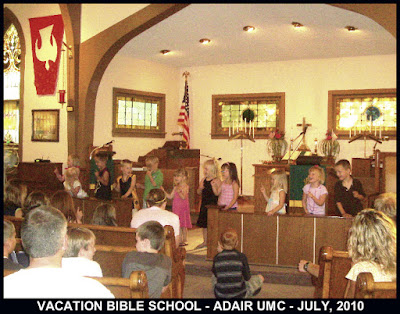 • • VACATION BIBLE SCHOOL
WITH ADAIR U.M.C., GOOD SHEPHERD,
AND PRESBYTERIAN CHURCHES —
FROM AUGUST 3 THRU AUGUST 6
———————————————————
• 1498 - Christopher Columbus landed
on "Isla Santa" (Venezuela).
• 1790 - The first U.S. census was
completed with a total population of
3,929,214 recorded.  The areas included
were the present states of Connecticut,
Delaware, Georgia, Kentucky, Maine,
Maryland, Massachusetts,  New Jersey,
New York, New Hampshire, Vermont,
Pennsylvania, Rhode Island, North
Carolina, South Carolina, Tennessee,
and Virginia.
• 1873 - Andrew S. Hallidie successfully
tested a cable car. It was designed for
San Francisco, California.
• 1876 - Colorado became the 38th state
to join the United States.
• 1907 - The U.S. Army established an
aeronautical division that later became
the U.S. Air Force.
• 1914 - Germany declared war on
Russia which was the beginning of
World War I.
• 1936 - Adolf Hitler presided over the
Olympic games that opened in Berlin.
• 1956 - The Social Security Act was
amended to provide benefits to disabled
workers aged 50-64 and disabled adult
children.
• 1975 - The Helsinki accords pledged
the signatory nations to respect human
rights.
• 1988 - Martin Scorsese's "The Last
Temptation of Christ" opened.
• 2006 - Cuban leader Fidel Castro
turned absolute power over Cuba to his
brother Raul while he underwent acute
intestinal surgery. On February 24, 2008,
National Assembly of People's Power
unanimously voted Raúl as president.
≈≈≈≈≈≈≈≈≈≈≈≈≈≈≈≈≈≈≈≈≈≈≈≈≈≈≈≈≈≈≈≈≈≈≈
Thank you for your many contributions
this week. Without you, we could never
keep up, you know.