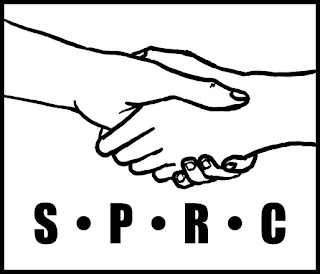 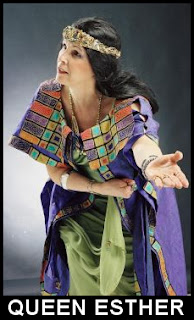 REBEKAH-(LEFT HOME TO WED A STRANGER), 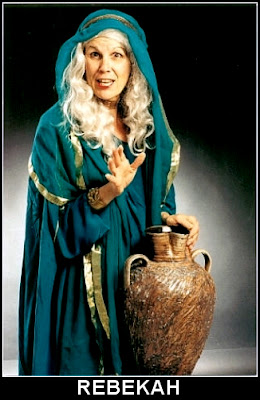 This promises to be a wonderful program.
Remember, 10 A.M. in Adair U.M.C.
Don't miss it. 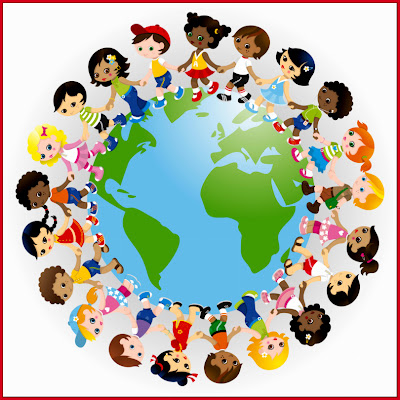 "Children's Sabbath" a registered trademark
of the Children's Defense Fund, sponsor of
this day.
This is designed primarily as a day for the
congregation to become more aware and
committed to addressing the particular
needs of children worldwide.
• India's new status as an economic super
power is masking the shocking rate of child
deaths among its poorest people. 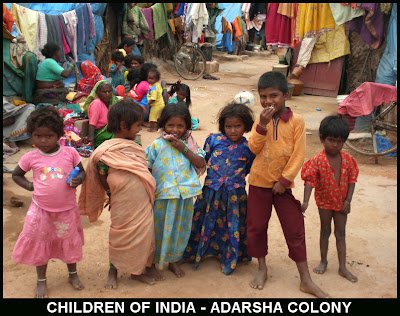 Nearly two million children under five die
every year in India. One every 15 seconds.
The highest number anywhere in the world.
More than half die in the month after birth
and 400,000 in their first 24 hours.
Malnutrition, neonatal diseases, diarrhea
and pneumonia are major causes of death.
• Even in India's capital, New Delhi, with a
population of 16,753,235 (2011) - an
estimated 20% of its population live in slums.
A devastating report by Save the Children.
Pray for the children.
—————————————————————
This week's global Christian Saint is
Nicholas, Bishop of Myra sometimes known,
though in very different form, as Santa Claus. 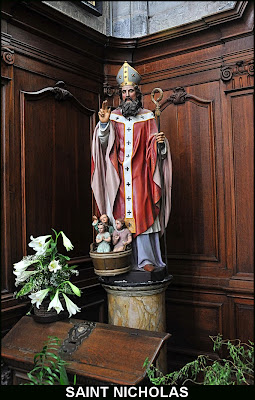 • SAINT NICHOLAS •
See the children in the basket at the bishop's
feet? Nicholas was known for defending and
rescuing children at risk of abuse or being
sold into slavery or prostitution.
• SAMUEL CHECOTE •
This week's United Methodist heritage saint
is Samuel Checote, Methodist Episcopal
Church South preacher and Chief of the
Creek Nation (1867-1875). 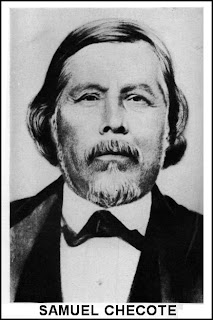 A Creek Methodist minister and politician,
Samuel Checote was born near Fort Mitchell,
Alabama, in 1819. A full-blood Creek, he
received instruction at the Asbury Manual
Labor School near Fort Mitchell. Samuel
Checote was 10 years old in 1829 when his
Muscogee (Creek) parents began the long
trip from their ancestral homeland in
Alabama to what is now Oklahoma, a trek
later named the "Trail of Tears."  After
removal to Indian Territory, Checote and his
parents settled west of Okmulgee, Oklahoma
in 1829. There, under the influence of John
Harrell, a Methodist missionary, Checote
attended Harrell's Academy and from thence
devoted his life to preaching. When the Lower
Creek Council in 1832 and 1844 passed a law
forbidding any tribal member to preach,
Checote successfully appealed to Chief
Roley McIntosh to repeal the law.
Checote joined Indian Mission Conference
of the Methodist Episcopal Church, South,
October 28, 1852. Only during the Civil War
did he exchange his devotion to the word
of God to that of the sword. During the Civil
War he began his Confederate service as
captain of Company B of the First Regiment
of Creek Mounted Volunteers on August 13,
1861, and on August 19, 1861, he became
lieutenant colonel of his regiment.
Upper Creeks had been pro-Union, and
Lower Creeks had fought for the South.
When Checote was elected principal chief
of the Creek Nation in 1867, the factional
conflict accelerated during the Green Peach
War. His tenure as chief lasted for twelve
years, and the Creek people saw a number
of administrative and moral changes due to
his leadership. He was selected a delegate
to the Ecumenical Conference of the
Methodist Episcopal Church in 1882;
however, he was too ill to attend.
Samuel Checote died in his Okmulgee home
September 3, 1884, at age 65.
—————————————————————
SCRIPTURE READINGS —
JOB 23:1-9, 16-17
† New International Reader's Version (NIRV)
Job tells his "friends" that he is earnestly
seeking God, trusting God to listen to his  evidence that his suffering seems unjust. Despite his seeking, God seems absent - or at least absolutely unresponsive.
JOB 23:1-9
JOB'S REPLY
1 Job replied,
2 "Even today my problems are more than I
can handle.
In spite of my groans, God's hand is heavy
on me. 3 I wish I knew where I could find him!
I wish I could go to the place where he lives!
4 I would state my case to him. I'd give him
all of my arguments.
5 I'd find out what his answers would be. I'd
think about what he would say.
6 Would he oppose me with his great power?
No. He wouldn't bring charges against me.
7 I'm an honest person. I could state my case
to him.  Then my Judge would tell me once
and for all that I'm not guilty.
8 "But if I go to the east, God isn't there.
If I go to the west, I don't find him.
9 When he's working in the north, I don't see
him there.  When he turns to the south, I don't
see him there either. 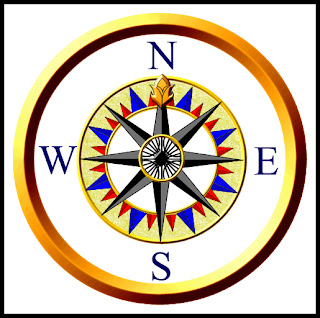 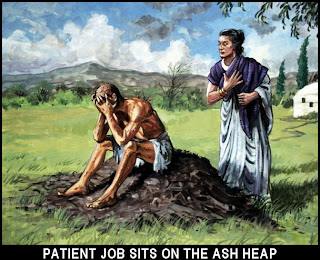 The Mighty One has filled me with terror.
17 But even the darkness of death will not
make me silent.
When the darkness of the grave covers my
face, I won't be quiet.
—————————————————————
PSALM 22:1-15 (UMH 752)
† New International Reader's Version (NIRV)
"My God, my God, why have you forsakenme?" Do not be quick to apply this to Jesus. This is an ancient lament of people seeking God in the midst of suffering they cannot explain. That is why it is such a fitting response to the reading from Job.A PSALM OF DAVID TO THE TUNE OF  "THE DOE OF THE MORNING."At the time the book of Psalms was written (around 1000 B.C.), this song title is noted: The Doe of the Morning - Psalm 22.  Listen to it on You Tube. (A familiar tune, but not very pleasant).
1 My God, my God, why have you deserted
me?
Why do you seem to be so far away when
I need you to save me?
Why do you seem to be so far away that
you can't hear my groans?
2 My God, I cry out in the daytime. But you
don't answer.
I cry out at night. I can't keep quiet. 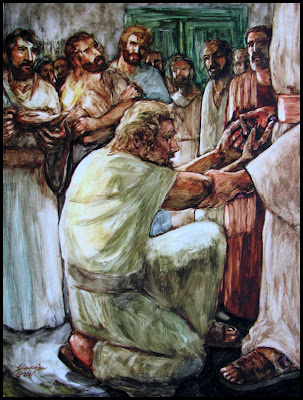 3 But you rule from your throne as the
Holy One.
You are the God Israel praises.
4 Our people of long ago put their trust in you.
They trusted in you, and you saved them.
5 They cried out to you and were saved.
They trusted in you, and you didn't let
them down.
6 People treat me like a worm and not a man.
They hate me and look down on me.
7 All those who see me laugh at me.
They shout at me and make fun of me.
They shake their heads at me.
8 They say, "He trusts in the Lord.
Let the Lord help him.
If the Lord is pleased with him,
let him save him."
9 But you brought me out of my mother's
body.
You made me trust in you
even when I was at my mother's breast.
10 From the time I was born, you took good
care of me.
Ever since I came out of my mother's
body, you have been my God.
11 Don't be far away from me.
Trouble is near,
and there is no one to help me.
12 Many enemies are all around me.
They are like strong bulls from the land
of Bashan.
13 They are like roaring lions that tear to
pieces what they kill.
They open their mouths wide to attack me.
14 My strength is like water that is poured
out on the ground.
I feel as if my bones aren't connected.
My heart has turned to wax.
It has melted away inside me.
15 My strength is dried up like a piece of
broken pottery.
My tongue sticks to the roof of my mouth.
You bring me down to the edge of the
grave.
—————————————————————
HEBREWS 4:12-16
† New International Reader's Version (NIRV)
The word of God is not words in a book, but a living, energetic, and powerful force that exposes everything in our "interior" lives to God's omniscient judgment. That's why  a great high priest who has passed through the heavens and who has experienced what we have is vital for us. Jesus thus enablesus to stand before God boldly, even as we seek mercy. 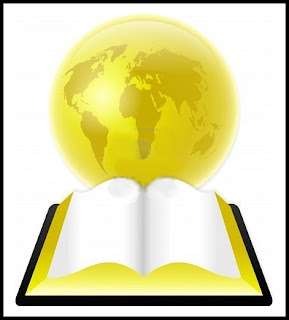 12 The word of God is living and active. It is
sharper than any sword that has two edges.
It cuts deep enough to separate soul from
spirit. It can separate joints from bones. It
judges the thoughts and purposes of the
heart.
13 Nothing God created is hidden from him.
His eyes see everything. He will hold us
accountable for everything we do.
JESUS IS THE GREAT HIGH PRIEST
14 We have a great high priest. He has gone
up into the heavens. He is Jesus the Son of
God. So let us hold firmly to what we say we
believe.
15 We have a high priest who can feel it
when we are weak and hurting. We have a
high priest who has been tempted in every
way, just as we are. But he did not sin.
16 So let us boldly approach the throne of
grace. Then we will receive mercy. We will
find grace to help us when we need it.
—————————————————————
MARK 10:17-31
† New International Reader's Version (NIRV)
An encounter between Jesus and a fairly wealthy man who has been faithful to the core principles of Torah toward others seeks the secret of eternal life. Jesus tells him he need do only one more thing — sell all he has, distribute the proceeds to the poor, and come follow him. He goes away disturbed by what he hears; his disciples are left wondering how anyone is saved if a person so clearly "blessed" won't be. 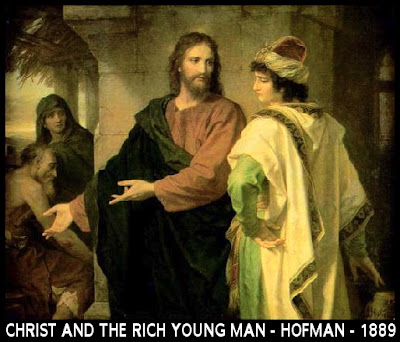 JESUS AND THE RICH YOUNG MAN
17 As Jesus started on his way, a man ran
up to him. He fell on his knees before Jesus.
"Good teacher," he said, "what must I do to
receive eternal life?"
18 "Why do you call me good?" Jesus
answered. "No one is good except God.
19 You know what the commandments say.
'Do not commit murder. Do not commit
adultery. Do not steal. Do not give false
witness. Do not cheat. Honor your father
and mother.' "
- (Exodus 20:12-16; Deuteronomy 5:16-20)
20 "Teacher," he said, "I have obeyed all
those commandments since I was a boy."
21 Jesus looked at him and loved him.
"You are missing one thing," he said. "Go
and sell everything you have. Give the
money to those who are poor. You will
have treasure in heaven. Then come and
follow me."
22 The man's face fell. He went away sad,
because he was very rich.
23 Jesus looked around. He said to his
disciples, "How hard it is for rich people
to enter God's kingdom!"
24 The disciples were amazed at his words.
But Jesus said again, "Children, how hard
it is to enter God's kingdom!
25 Is it hard for a camel to go through the
eye of a needle? It is even harder for the
rich to enter God's kingdom!"
26 The disciples were even more amazed.
They said to each other,
"Then who can be saved?"
27 Jesus looked at them and said, "With
man, that is impossible. But not with God.
All things are possible with God."
28 Peter said to him, "We have left
everything to follow you!"
29 "What I'm about to tell you is true,"
Jesus replied. "Has anyone left home or
family or fields for me and the good news?
30 They will receive 100 times as much in
this world. They will have homes and
families and fields. But they will also be
treated badly by others. In the world to
come they will live forever.
31 But many who are first will be last. And
the last will be first."
≈≈≈≈≈≈≈≈≈≈≈≈≈≈≈≈≈≈≈≈≈≈≈≈≈≈≈≈≈≈≈≈≈≈≈≈≈≈≈
WEDNESDAY, OCTOBER 17TH —
Dorcas - Ruth Circle meets in Adair
at 1:30 P.M. 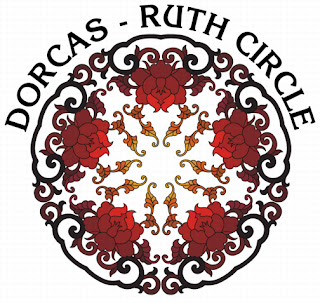 Esther Circle will meet in Adair at 7 P.M. 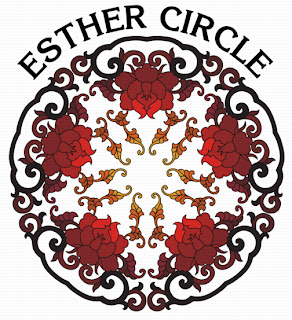 Martha Circle will meet in Casey at 7 P.M. 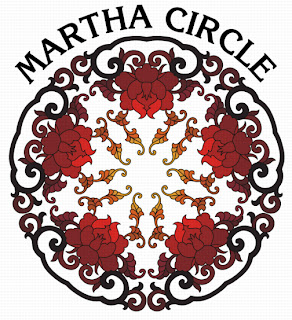 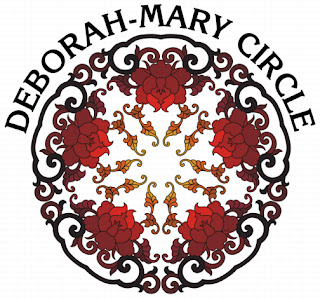 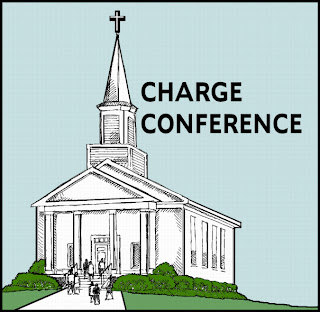