CASEY UMC 10:15 A.M.
WE ARE BEGINNING A 5 WEEK SERMON
SERIES BASED ON THE BOOK,
"THE POWER OF A WHISPER" BY BILL HYBELS 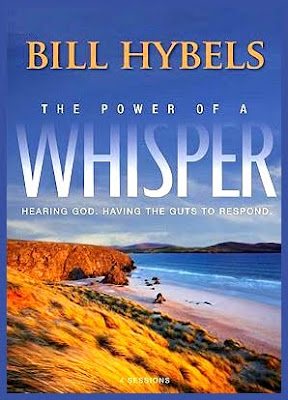 PROVERBS 22:1-2, 8-9, 22-23
New International Reader's Version (NIRV)
A selection of sayings about wealth, justice,
generosity, and the poor.
PROVERBS 22:1-2
1 You should want a good name more than you
want great riches. To be highly respected is better
than having silver or gold. 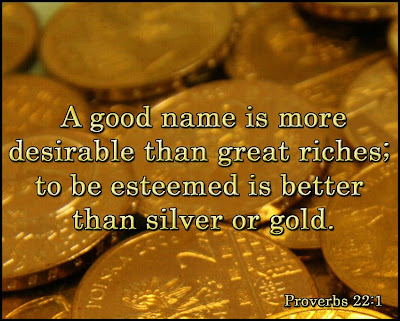 2 The Lord made rich people and poor people.
That's what they have in common.

PROVERBS 22:8-9
8 Anyone who plants evil gathers a harvest of
trouble. His power to beat others down will be
destroyed. 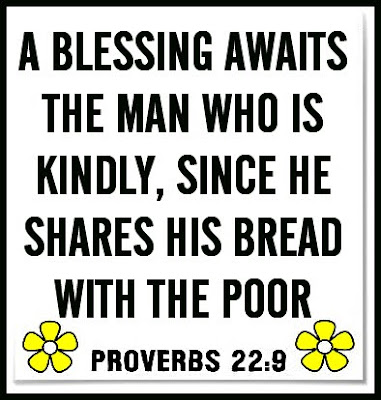 9 Anyone who gives freely will be blessed.
That's because he shares his food with those
who are poor. 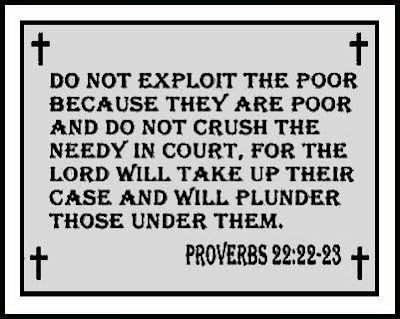 22 Don't take advantage of poor people just
because they are poor. Don't beat down those
who are in need by taking them to court.
23 The Lord will stand up for them in court. He
will take back the stolen goods from those who
have robbed them.
——————————————————————
PSALM 124 OR PSALM 125 (UMH 846)
PSALM 125
New International Reader's Version (NIRV)
Psalm 125 speaks of God's protection for
the righteous.
A SONG FOR THOSE WHO GO UP TO
JERUSALEM TO WORSHIP THE LORD.
1 Those who trust in the Lord are like Mount Zion.
They will always be secure. They will last forever.
2 Like the mountains around Jerusalem,
the Lord is all around his people
both now and forever.
3 Evil people will not always rule
the land the Lord gave to those who do right.
If they did, those who do right might do
what is evil.
4 Lord, do good to those who are good.
Do good to those whose hearts are honest.
5 But what about those who have taken paths
that are crooked?
The Lord will drive them out, along with those
who do what is evil.
May Israel enjoy peace.

PSALM 124 (UMH 846)
New International Reader's Version (NIRV)
Psalm 124 offers thanksgiving for God's
deliverance from enemies.
A SONG FOR THOSE WHO GO UP TO
JERUSALEM TO WORSHIP THE LORD.
A PSALM OF DAVID.
1 Here is what Israel should say.
Suppose the Lord had not been on our side.
2 Suppose the Lord had not been on our side
when our enemies attacked us.
3 Suppose he had not been on our side
when their anger blazed out against us.
Then they would have swallowed us alive.
4 They would have been like a flood that drowned
us. They would have swept over us like a rushing
river.
5 They would have washed us away
like a swollen stream.
6 Give praise to the Lord.
He has not let our enemies chew us up.
7 We have escaped like a bird
from a hunter's trap.
The trap has been broken,
and we have escaped.
8 Our help comes from the Lord.
He is the Maker of heaven and earth.
——————————————————————
JAMES 2:1-10 (11-13) 14-17
New International Reader's Version (NIRV)
James teaches that favoritism based on
economic or social status is contrary to the
call of Christian discipleship. God has
enabled the poor to be rich in faith, but the
rich have often exercised their power to
oppress people and keep them poor.
Disciples of Jesus must take direct action to
relieve the needs of the poor
— "faith without works is dead."
JAMES 2:1-10
TREAT EVERYONE THE SAME
1 My brothers and sisters, you are believers in
our glorious Lord Jesus Christ. So treat everyone
the same.
2 Suppose a man comes into your meeting wearing
a gold ring and fine clothes. And suppose a poor
man in worn-out clothes also comes in.
3 Would you show special attention to the one
who is wearing fine clothes? Would you say,
"Here's a good seat for you"? Would you say to
the poor person, "You stand there"? Or "Sit on
the floor by my feet"?
4 If you would, aren't you treating some people
better than others? Aren't you like judges who
have evil thoughts?
5 My dear brothers and sisters, listen to me.
Hasn't God chosen those who are poor in the
world's eyes to be rich in faith? Hasn't he chosen
them to receive the kingdom? Hasn't he promised
it to those who love him?
6 But you have put poor people down. Aren't rich
people taking advantage of you? Aren't they
dragging you into court?
7 Aren't they speaking evil things against the
worthy name of Jesus? Remember, you belong
to him.
8 The royal law is found in Scripture. It says,
"Love your neighbor as you love yourself."—
(Leviticus 19:18) If you really keep that law, you
are doing what is right.
9 But you sin if you don't treat everyone the same.
The law judges you because you have broken it.
10 Suppose you keep the whole law but trip over
just one part of it. Then you are guilty of breaking
all of it.

JAMES 2:11-13
11 God said, "Do not commit adultery."—
(Exodus 20:14; Deuteronomy 5:18)
He also said, "Do not commit murder."—
(Exodus 20:13; Deuteronomy 5:17)
Suppose you don't commit adultery but do
commit murder. Then you have broken the Law.
12 Speak and act like people who are going to
be judged by the law that gives freedom.
13 Those who have not shown mercy will not
receive mercy when they are judged. To show
mercy is better than to judge.

JAMES 2:14-17
SHOW YOUR FAITH BY WHAT YOU DO
14 My brothers and sisters, what good is it if
people claim they have faith but don't act like it?
Can that kind of faith save them?
15 Suppose a brother or sister has no clothes or
food.
16 Suppose one of you says to them, "Go. I hope
everything turns out fine for you. Keep warm.
Eat well." And you do nothing about what they
really need. Then what good have you done?
17 It is the same with faith. If it doesn't cause us
to do something, it's dead.
MARK 7:24-37
New International Reader's Version (NIRV)
Jesus goes to Lebanon for a vacation and
there encounters a local woman whose
begging ultimately convinces him to free her
daughter from a demon. Returning to Galilee,
and re-entering the region of the Decapolis
(where he had cast out a legion of demons),
Jesus heals a man who could not hear or
speak. The more he ordered others not to
speak of this, the more they spread it abroad.
THE FAITH OF A GREEK WOMAN 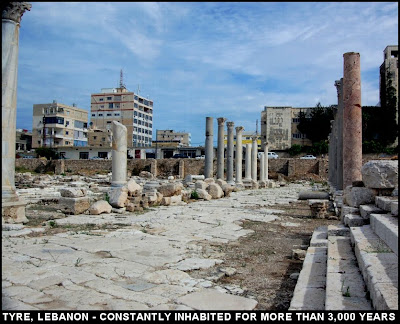 24 Jesus went from there to a place near Tyre.
He entered a house. He did not want anyone to
know where he was. But he could not
keep it a secret.
25 Soon a woman heard about him. An evil spirit
controlled her little daughter. The woman came
to Jesus and fell at his feet.
26 She was a Greek, born in Syrian Phoenicia.
She begged Jesus to drive the demon out of
her daughter. 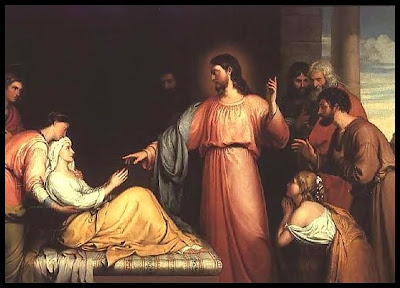 27 "First let the children eat all they want," he told
her. "It is not right to take the children's bread and
throw it to their dogs."
28 "Yes, Lord," she replied. "But even the dogs
under the table eat the children's crumbs."
29 Then he told her, "That was a good reply. You
may go. The demon has left your daughter."
30 So she went home and found her child lying
on the bed. And the demon was gone.
JESUS HEALS A MAN WHO COULD NOT
HEAR OR SPEAK
31 Then Jesus left the area of Tyre and went
through Sidon. 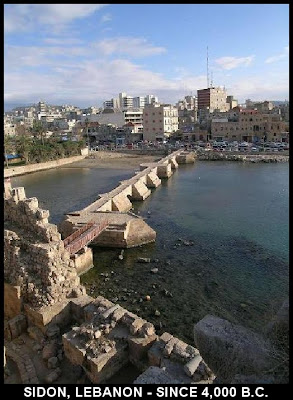 He went down to the Sea of Galilee
and into the area known as the Ten Cities.
32 There some people brought a man to him.
The man was deaf and could hardly speak. They
begged Jesus to place his hand on him.
33 Jesus took the man to one side, away from
the crowd. He put his fingers into the man's ears.
Then he spit and touched the man's tongue.
34 Jesus looked up to heaven. With a deep sigh,
he said to the man, "Ephphatha!" That means
"Be opened!" 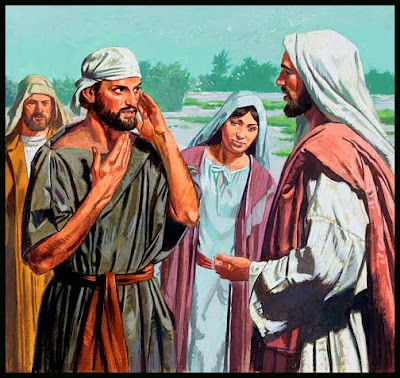 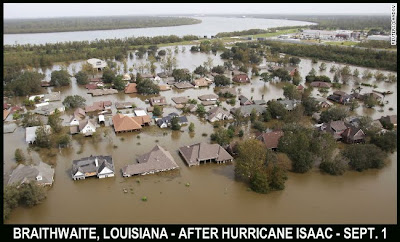 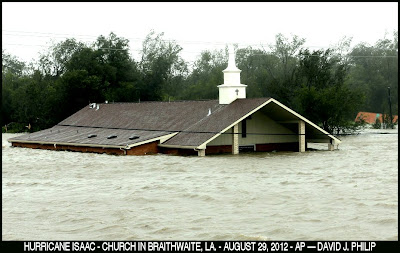 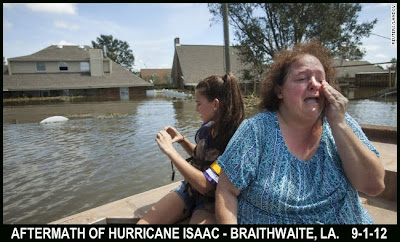 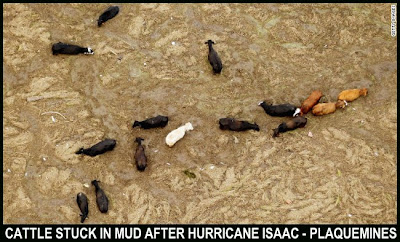 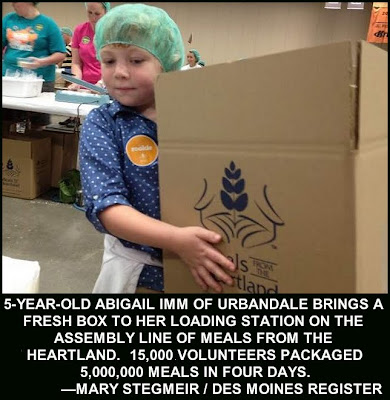 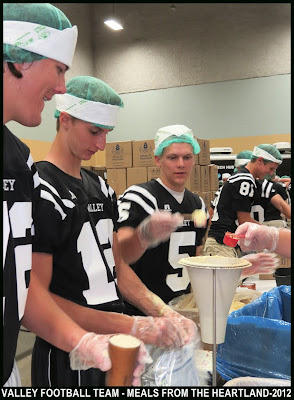 I defy anyone to say, “The younger generation is
up to no good.”
God Bless and Keep You,
Pastor Melodee