OUR WEEK-JULY 29TH TO AUGUST 4TH 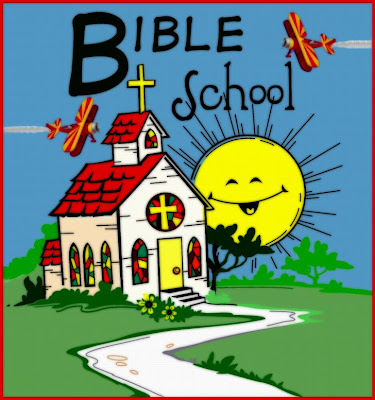 ADAIR VACATION BIBLE SCHOOL
THRU THURSDAY THIS WEEK
• • • THURSDAY: ADAIR U.M.C. • • •
VACATION BIBLE SCHOOL PROGRAM
≈≈≈≈≈≈≈≈≈≈≈≈≈≈≈≈≈≈≈≈≈≈≈≈≈≈≈≈≈≈≈≈≈≈≈≈≈≈
SUNDAY, JULY 29TH —NINTH SUNDAY AFTER PENTECOSTCOLOR: GREENSCRIPTURE READINGS:
2 SAMUEL 11:1-15
New International Reader's Version (NIRV)
In this week's reading, the Bible offers noexcuses or spin. It simply discloses howKing David was a coward (or lazy, or both!),an adulterer, a thief, and . . . a murderer.• A king, like a nation, even one "after God'sown heart," is particularly susceptible tothe worst of temptations, corruption, and sinthat anyone can commit.• Today we read the saga of King David'sfailure to lead his troops into battle, hisadultery with Bathsheba, his failure tocompensate Uriah for adulterating his wife,and his order to have Uriah placed on thefrontline of battle, and deserted to slaughter.
DAVID AND BATHSHEBA1 It was spring. It was the time when kings go
off to war. So David sent Joab out with the king's
special troops and the whole army of Israel. 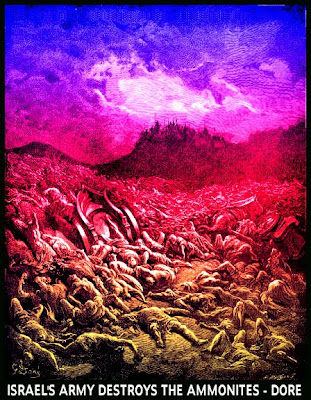 They destroyed the Ammonites. They went to
the city of Rabbah. They surrounded it and got
ready to attack it.
But David remained in Jerusalem. 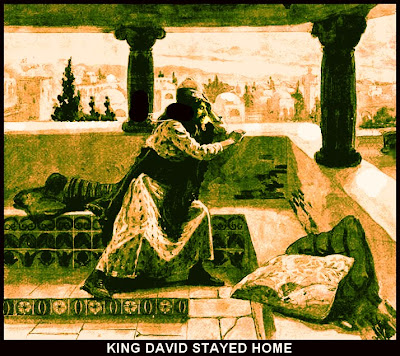 2 One evening David got up from his bed. He
walked around on the roof of his palace. From
the roof he saw a woman taking a bath. She
was very beautiful.
3 David sent a messenger to find out who she
was. The messenger returned and said, "She
is Bathsheba. She's the daughter of Eliam.
She's the wife of Uriah. He's a Hittite."
4 Then David sent messengers to get her. 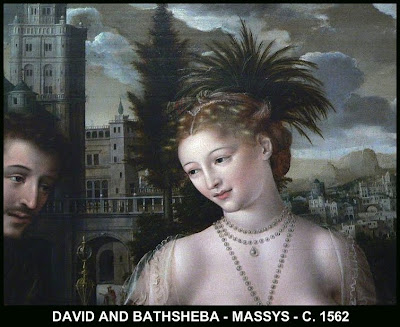 She came to him. And he had sex with her. Then
she went back home. All of that took place after
she had already made herself "clean" from her
monthly period.
5 Later, Bathsheba found out she was pregnant.
She sent a message to David. It said,
"I'm pregnant."
6 So David sent a message to Joab. It said,
"Send me Uriah, the Hittite."
Joab sent him to David.
7 Uriah came to David. David asked him how
Joab and the soldiers were doing. He also
asked him how the war was going.
8 David said to Uriah, "Go home and enjoy
some time with your wife." So Uriah left the
palace. Then the king sent him a gift.
9 But Uriah didn't go home. Instead, he slept
at the entrance to the palace. He stayed there
with all of his master's servants.
10 David was told, "Uriah didn't go home." So
he sent for Uriah. He said to him, "You have
been away for a long time.
Why didn't you go home?"
11 Uriah said to David, "The ark and the army
of Israel and Judah are out there in tents. My
master Joab and your special troops are
camped in the open fields. How could I go to
my house to eat and drink? How could I go
there and make love to my wife? I could never
do a thing like that. And that's just as sure as
you are alive!"
12 Then David said to him, "Stay here one
more day. Tomorrow I'll send you back to the
battle." So Uriah remained in Jerusalem that
day and the next.
13 David invited Uriah to eat and drink with him.
David got him drunk. But Uriah still did not go
home. In the evening he went out and slept on
his mat. He stayed there among his master's
servants.
14 The next morning David wrote a letter to
Joab. He sent it along with Uriah. 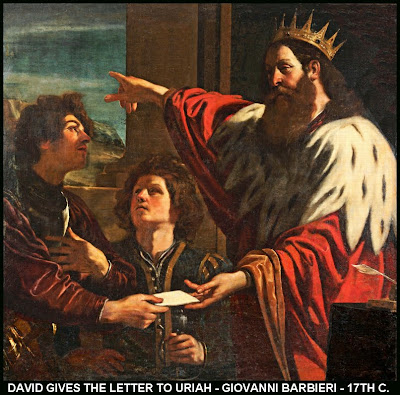 15 In it he wrote, "Put Uriah on the front lines.
That's where the fighting is the heaviest. Then
pull your men back from him. When you do, 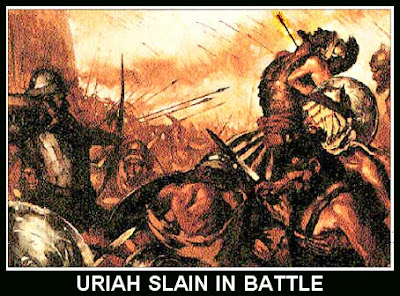 the Ammonites will strike him down and kill him."
——————————————————————
PSALM 14 (UMH 746)
New International Reader's Version (NIRV)
A cry for deliverance from corruption allaround and recognition that only God, andno mere mortal, can provide what is needed.
A PSALM OF DAVID 1 Foolish people say in their hearts,
"There is no God."
They do all kinds of horrible and evil things.
No one does anything good.
2 The Lord looks down from heaven
on all people.
He wants to see if there are any who
understand.
He wants to see if there are any who trust
in God.
3 All of them have turned away.
They have all become evil.
No one does anything good,
no one at all.
4 Won't those who do evil ever learn?
They eat up my people as if they were
eating bread.
They don't call out to the Lord for help.
5 Just look at them! They are filled with terror
because God is among those who do right.
6 You who do evil make it hard for poor people
to do what they plan to do.
But the Lord is their place of safety.
7 How I pray that the One who saves Israel
will come out of Zion!
Then the Lord will bless his people with
great success again.
So let the people of Jacob be filled with joy!
Let Israel be glad!
——————————————————————
EPHESIANS 3:14-21
New International Reader's Version (NIRV)
The lectionary leaves out the preceding verses that make sense of this passage (verses 1-13). The reason that the writer bends the knee before the Father is the revelation of the mystery that God will use the church as the means to make one new humanity out of the two (Gentile and Jew). That is why he prays that they may be "filled with all the fullness of God" - - that they may live out the fullness of the calling to which they have been called. Paul says he is frequently imprisoned, and gladly so, because he gladly proclaims that God is making one new humanity in Jesus Christ. For this to be made known among the Gentiles, that God is offering and making them fellow heirs with Jewish people in the church through Christ, Paul has been sent to announce it in places where Gentiles abound. Proclaiming such a message of the boundless riches of Christ offered to all, Jewish and Gentile alike, and then seeing signs of that grace actually happen, often had meant that Paul would end up beaten, jailed, or tortured. • That's why Paul is praying for the "Ephesian circuit," a group of related congregations where Jewish and Gentile were functioning as one body in Christ both within and around their communities. He prays they may be strengthened, given all wisdom in the Holy Spirit, to understand "with all the saints the breadth and length and height and depth" of God's love, that they may all, across the entire circuit, become "rooted and grounded in love." It was the awareness of the abundance of God's grace, God's loving kindness toward all, that motivated Paul to live out his mission, despite the serious consequences.
PAUL PRAYS FOR GOD'S PEOPLE14 I bow in prayer to the Father because of my
work among you.
15 From the Father his whole family in heaven
and on earth gets its name.
16 I pray that he will use his glorious riches to
make you strong. May his Holy Spirit give you
his power deep down inside you.
17 Then Christ will live in your hearts because
you believe in him.
And I pray that your love will have deep roots.
I pray that it will have a strong foundation. 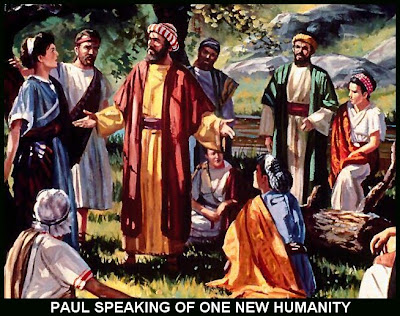 18 May you have power with all God's people
to understand Christ's love. May you know how
wide and long and high and deep it is.
19 And may you know his love, even though it
can't be known completely. Then you will be
filled with everything God has for you.
20 God is able to do far more than we could
ever ask for or imagine. He does everything by
his power that is working in us.
21 Give him glory in the church and in Christ Jesus.
Give him glory through all time and
forever and ever. Amen.
——————————————————————
JOHN 6:1-21
New International Reader's Version (NIRV)
John's version of the feeding of the 5000 and
Jesus walking on the water to meet the
disciples as they row in vain against strong
wind and waves.
JESUS FEEDS THE FIVE THOUSAND1 Some time after this, Jesus crossed over to
the other side of the Sea of Galilee. It is also
called the Sea of Tiberias.
2 A large crowd of people followed him. They
had seen the miraculous signs he had done on
those who were sick.
3 Then Jesus went up on a mountainside.
There he sat down with his disciples.
4 The Jewish Passover Feast was near.
5 Jesus looked up and saw a large crowd
coming toward him. So he said to Philip, "Where
can we buy bread for these people to eat?"
6 He asked this only to put Philip to the test. He
already knew what he was going to do.
7 Philip answered him, "Eight months' pay would
not buy enough bread for each one to have a bite!"
8 Another of his disciples spoke up. It was
Andrew, Simon Peter's brother.
9 He said, "Here is a boy with five small loaves
of barley bread. He also has two small fish. 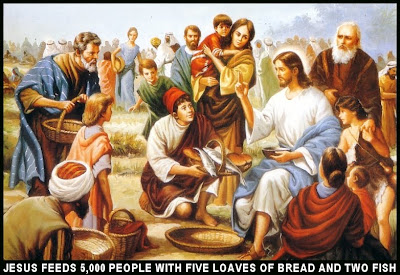 But how far will that go in such a large crowd?"
10 Jesus said, "Have the people sit down."
There was plenty of grass in that place, and they
all sat down. The number of men among them
was about 5,000. 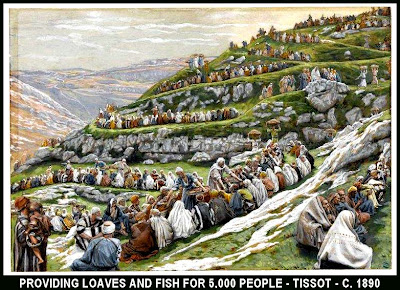 11 Then Jesus took the loaves and gave thanks.
He handed out the bread to those who were
seated. He gave them as much as they wanted.
And he did the same with the fish.
12 When all of them had enough to eat, Jesus
spoke to his disciples. "Gather the leftover
pieces," he said. "Don't waste anything."
13 So they gathered what was left over from
the five barley loaves. They filled 12 baskets
with the pieces left by those who had eaten.
14 The people saw the miraculous sign that
Jesus did. Then they began to say, "This must
be the Prophet who is supposed to
come into the world."
15 But Jesus knew that they planned to come
and force him to be their king. So he went away
again to a mountain by himself.
JESUS WALKS ON THE WATER
16 When evening came, Jesus' disciples went
down to the Sea of Galilee.
17 There they got into a boat and headed
across the lake toward Capernaum. By now it
was dark. Jesus had not yet joined them.
18 A strong winds were blowing, and the water
became rough.
19 They rowed three or three and a half miles.
Then they saw Jesus coming toward the boat.
He was walking on the water. They were terrified. 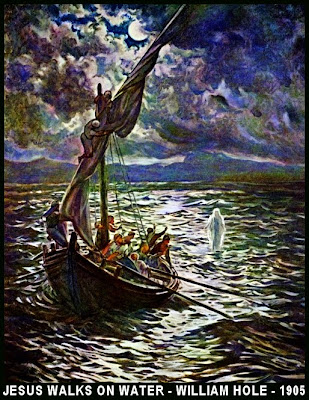 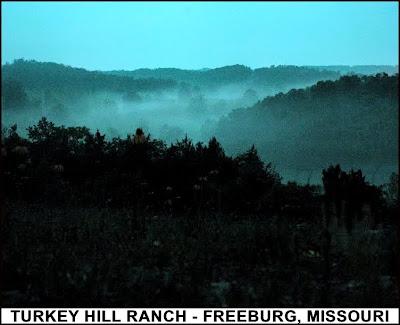 in Missouri so the office will be closed until
August 3rd. 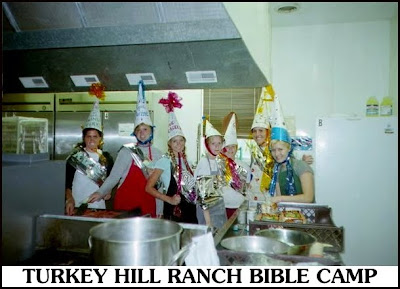 Have a great time Naomi. 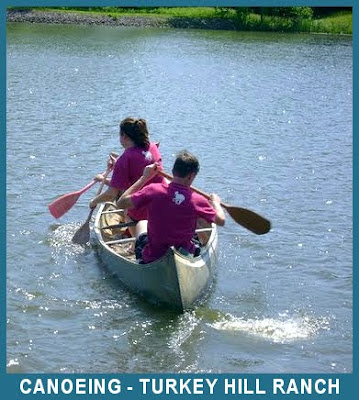 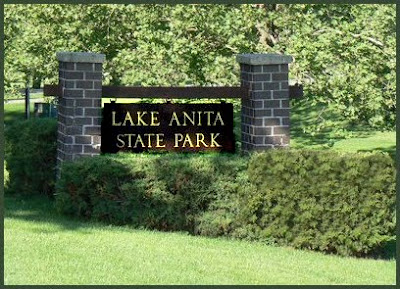 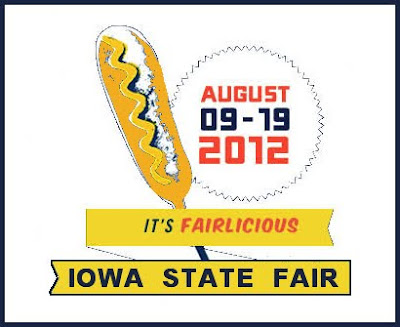 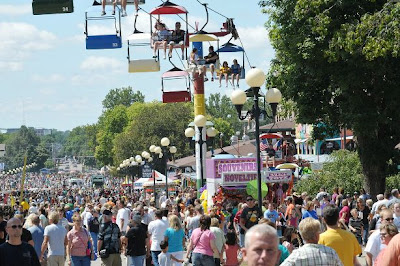 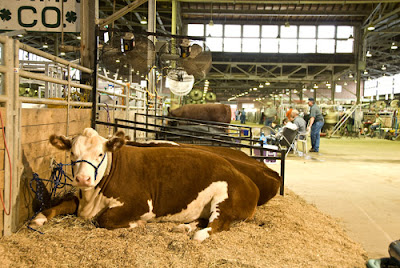