OUR WEEK-APRIL 29TH TO MAY 5TH 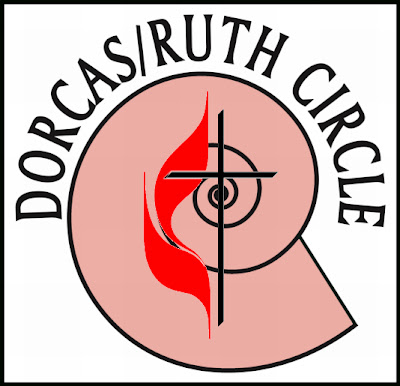 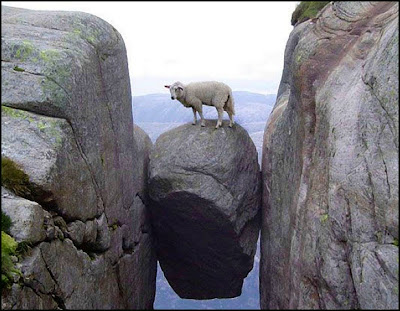 Lambs would be running, jumping, 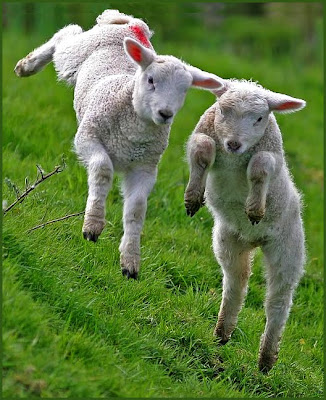 bleating for mothers; mothers crying for babies.
We might be more familiar with "cowboy"
imagery. 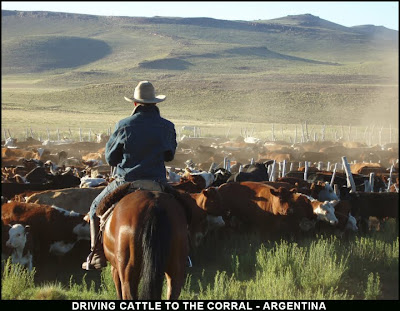 It still means protecting and caring for
those entrusted to you. If one was lost, it would
be on your shoulders.
———————————————————————
OUR SCRIPTURE READINGS:
ACTS 4:5-12
(Amplified Bible)
The leaders who had Peter arrested for healing
the lame man and proclaiming the resurrection
of Jesus demand by what authority he acted.
Peter boldly proclaimed it was by the power and
name of Jesus Christ of Nazareth, and that all
salvation there is comes through him. The
people asking the questions presume to be in
authority. They ask Peter and John what sort of
"power" and "name" they used to do what they
did. In other words, this was done
without proper authority. 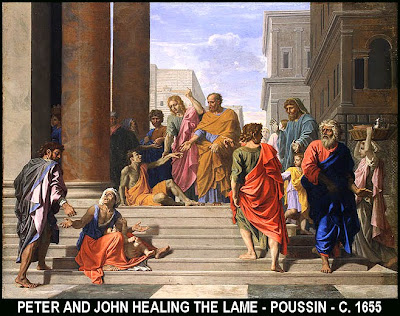 5 Then on the following day, their magistrates and
elders and scribes were assembled in Jerusalem,
6 Including Annas the high priest and Caiaphas and
John and Alexander and all others who belonged to
the high priestly relationship. 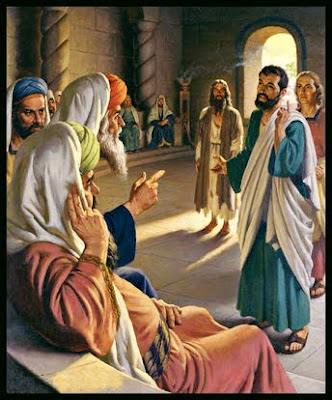 7 And they set the men in their midst and repeatedly
demanded, By what sort of power or by what kind of
authority did [such people as] you do this [healing]?
8 Then Peter, [because he was] filled with [and
controlled by] the Holy Spirit, said to them, Rulers of
the people and members of the council (Sanhedrin), 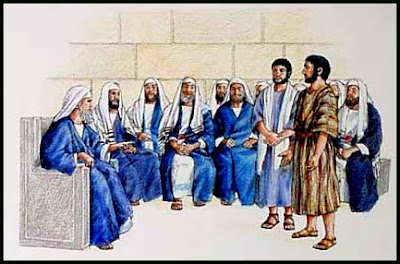 9 If we are being put on trial today and examined
concerning a good deed done to benefit a feeble
(helpless) cripple, by what means this man has been
restored to health,
10 Let it be known and understood by all of you, and
by the whole house of Israel, that in the name and
through the power and authority of Jesus Christ of
Nazareth, Whom you crucified, [but] Whom God
raised from the dead, in Him and by means of Him
this man is standing here before you well and sound
in body.
11 This [Jesus] is the Stone which was despised and
rejected by you, the builders, but which has become
the Head of the corner [the Cornerstone],
12 And there is salvation in and through no one else,
for there is no other name under heaven given
among men by and in which we must be saved.———————————————————————
PSALM 23 (UMH 754 or 137)
(New International Reader's Version)
A psalm of David. 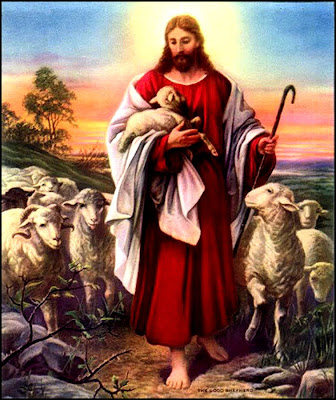 1 The Lord is my shepherd.
He gives me everything I need.
2 He lets me lie down in fields of green grass. 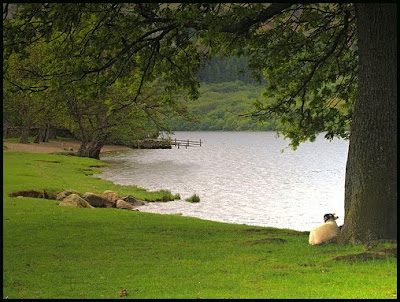 He leads me beside quiet waters.
3 He gives me new strength.
He guides me in the right paths
for the honor of his name.
4 Even though I walk
through the darkest valley,
I will not be afraid.
You are with me.
Your shepherd's rod and staff
comfort me.
5 You prepare a feast for me
right in front of my enemies.
You pour oil on my head.
My cup runs over.
6 I am sure that your goodness and love will follow
me all the days of my life.
And I will live in the house of the Lord forever.
THIS IS THE VERSION YOU AND I LEARNED IN
SUNDAY SCHOOL
PSALM 23
(King James Version)
1 The LORD is my shepherd; I shall not want.
2 He maketh me to lie down in green pastures:
he leadeth me beside the still waters.
3 He restoreth my soul: he leadeth me in the paths
of righteousness for his name's sake.
4 Yea, though I walk through the valley of the
shadow of death, I will fear no evil: for thou art with
me; thy rod and thy staff they comfort me.
5 Thou preparest a table before me in the presence
of mine enemies: thou anointest my head with oil;
my cup runneth over.
6 Surely goodness and mercy shall follow me all
the days of my life: and I will dwell in the house
of the LORD for ever.
———————————————————————
1 JOHN 3:16-24
(New International Reader's Version)
By the authority and power of the Risen Christ,
we are led to love not in words only, but also in
truth and in action.
16 We know what love is because Jesus Christ
gave his life for us. So we should give our lives for
our brothers and sisters.
17 Suppose someone sees a brother or sister
in need and is able to help them. If he doesn't
ake pity on them, how can the love of God be
n him?
18 Dear children, don't just talk about love. Put your
love into action. Then it will truly be love.
19 That's how we know that we hold to the truth.
And that's how we put our hearts at rest, knowing
that God is watching.
20 Our hearts may judge us. But God is greater
than our hearts. He knows everything.
21 Dear friends, if our hearts do not judge us, we
can be bold with God.
22 And he will give us anything we ask. That's
because we obey his commands. We do what
pleases him.
23 God has commanded us to believe in the name
of his Son, Jesus Christ. He has also commanded us
to love one another.
24 Those who obey his commands remain joined to
him. And he remains joined to them.
How do we know that God lives in us? We know it
because of the Holy Spirit he gave us.
———————————————————————
JOHN 10:11-18
(New International Reader's Version)
The authority of the Risen Lord, the Good
Shepherd over his flock, comes from knowing
his sheep by name, caring for them, and laying
down his own life to protect them. Jesus also
notes his "flock" includes people that were not
in "this fold," and he extends the same mission
and care to them.
11 "I am the good shepherd. The good shepherd
gives his life for the sheep.
12 The hired man is not the shepherd who owns the
sheep. So when the hired man sees the wolf coming,
he leaves the sheep and runs away. Then the wolf
attacks the flock and scatters it.
13 The man runs away because he is a hired man.
He does not care about the sheep.
14 "I am the good shepherd. I know my sheep, and
my sheep know me. 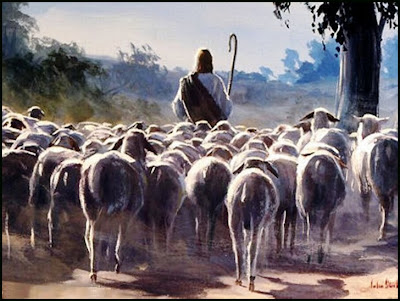 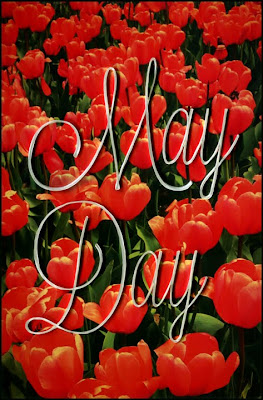 THURSDAY, MAY 3RD —
NATIONAL DAY OF PRAYER
The first Thursday of May, designated by the
United States Congress, when people are asked
"to turn to God in prayer and meditation".
Each year, the president signs a proclamation,
encouraging all Americans to pray on this day.
The law formalizing its annual observance was
enacted in 1952, although it's historical origin
was a mandate by George Washington, the first
president of the United States.

President Abraham Lincoln designated
April 30, 1863 as a day of "national prayer" in the
hope that God would respond by restoring "our
now divided and suffering Country, to its former
condition of unity and peace".

On April 17, 1952, President Harry S. Truman
signed a bill proclaiming a National Day of Prayer
to be declared by each following president at the
date of his choice.