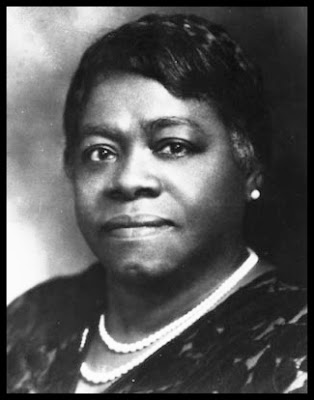 The cabin where Mary Jane McLeod was born
and grew up in Mayesville, South Carolina. AND WE ACKNOWLEDGE JOHN WOOLMAN 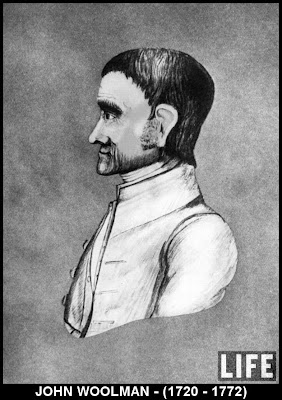 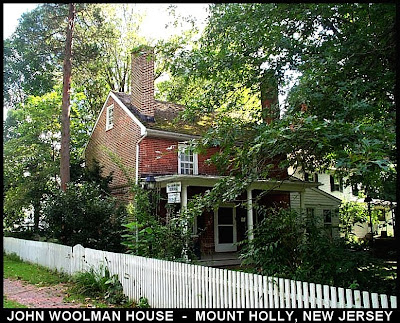 • At age 23 his employer asked him to write a bill
of sale for a slave. Though he told his employer
that he thought slavekeeping was inconsistent
with Christianity, he wrote the bill of sale. Later
he refused to write the part of a will that included
disposing of a slave and in that case, convinced
the man to set the slave free.
• He subsequently refused to draw up wills
transferring slaves. Working on a personal,
nonconfrontational, level, he convinced many
Quaker slaveholders to free their slaves.
• In his lifetime, Woolman did not succeed in
eradicating slavery within the Society of Friends
or in colonial America; however, his personal
efforts changed Quaker viewpoints.
• In 1790 the Society of Friends petitioned the
United States Congress for the abolition of
slavery.
• Woolman showed unusual insight for his time,
living and working among the Indians. He
recognized that the Spirit moved among them.
He showed concern for the poor, for animals
and for the environment. His Quaker witness
qualified as one of the earliest precedents to
modern campaigns and sensibilities to the
equality of life.
“The Journal of John Woolman” is not only
considered an important spiritual document,
but also a classic in English literature. 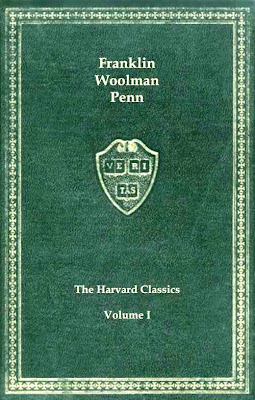 ————————————————————————
SUNDAY, OCTOBER 9, 2011
SEVENTEENTH SUNDAY AFTER PENTECOST
COLOR: GREEN
OUR SCRIPTURE READINGS:
EXODUS 32:1-14
(The Message)
While Moses was up on the mountain with God,
the people became anxious. Aaron leads them
to fashion a golden calf and to worship it. This
appalled God and Moses. Only through Moses'
intercession was disaster averted. Moses
"talks God down" from utterly obliterating the
people because of their idolatry and from
transferring the promises of descendants
wholly to Moses and his line.
1 When the people realized that Moses was taking
forever in coming down off the mountain, they
rallied around Aaron and said, "Do something.
Make gods for us who will lead us. That Moses,
the man who got us out of Egypt - who knows
what's happened to him?"
2 So Aaron told them, "Take off the gold rings from
the ears of your wives and sons and daughters
and bring them to me."
3 They all did it; they removed the gold rings from
their ears and brought them to Aaron.
4 He took the gold from their hands and cast it in
the form of a calf, shaping it with an engraving tool.

The people responded with enthusiasm:
"These are your gods, O Israel, who brought you
up from Egypt!"
5 Aaron, taking in the situation, built an altar before
the calf. Aaron then announced, "Tomorrow is a
feast day to God!"
6 Early the next morning, the people got up and
offered Whole-Burnt-Offerings and brought Peace
Offerings. The people sat down to eat and drink
and then began to party. It turned into a wild party! 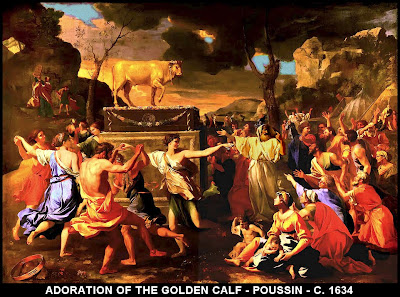 7 God spoke to Moses, "Go! Get down there! Your
people whom you brought up from the land of Egypt
have fallen to pieces. 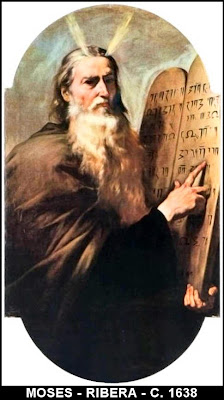 8 In no time at all they've turned away from the way
I commanded them: They made a molten calf and
worshiped it. They've sacrificed to it and said, 'These
are the gods, O Israel, that brought you up from the
land of Egypt!'"
9 God said to Moses, "I look at this people - oh! what
a stubborn, hard-headed people!
10 Let me alone now, give my anger free reign to
burst into flames and incinerate them. But I'll make a
great nation out of you."
11 Moses tried to calm his God down. He said,
"Why, God, would you lose your temper with your
people? Why, you brought them out of Egypt in a
tremendous demonstration of power and strength.
12 Why let the Egyptians say, 'He had it in for them
— he brought them out so he could kill them in the
mountains, wipe them right off the face of the Earth.'
Stop your anger. Think twice about bringing evil
against your people!
13 Think of Abraham, Isaac, and Israel, your
servants to whom you gave your word, telling them
'I will give you many children, as many as the stars
in the sky, and I'll give this land to your children as
their land forever.'"
14 And God did think twice. He decided not to do
the evil he had threatened against his people.
————————————————————————
PSALM 106:1-6, 19-23 (UMH 829)
(The Message)
PSALM 106:1-6
1 Hallelujah! Thank God! And why? Because he's
good, because his love lasts.
2 But who on earth can do it - declaim God's mighty
acts, broadcast all his praises?
3 You're one happy man when you do what's right,
one happy woman when you form the habit of justice.
4 Remember me, God, when you enjoy your people;
include me when you save them;
5 I want to see your chosen succeed, celebrate with
your celebrating nation, join the Hallelujahs of your
pride and joy!
6 We've sinned a lot, both we and our parents;
We've fallen short, hurt a lot of people.
PSALM 106:19-23
19 They cast in metal a bull calf at Horeb and
worshiped the statue they'd made. 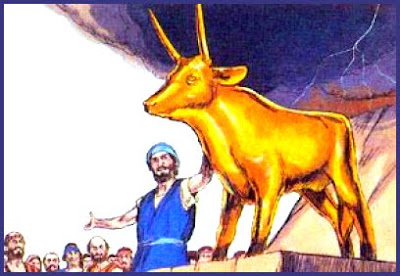 20 They traded the Glory for a cheap piece of
sculpture - a grass-chewing bull!
21 They forgot God, their very own Savior, who
turned things around in Egypt,
22 Who created a world of wonders in the Land
of Ham, who gave that stunning performance at
the Red Sea.
23 Fed up, God decided to get rid of them - and
except for Moses, his chosen, he would have. 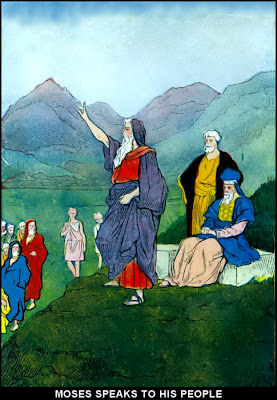 But Moses stood in the gap and deflected God's
anger, prevented it from destroying them utterly.
————————————————————————
PHILIPPIANS 4:1-9
(The Message)
Paul is realistic about conflict. Conflict will occur.
Paul urges a community that has developed
capacities to handle conflict with confidence and
grace. Paul addresses the specific conflict in the
community at Philippi head-on, calling the two
chief parties in the conflict by name,
Euodia and Syntyche, and asking for assistance
of Syzygos, a bishop whose name means
"yokemate," to help resolve it. The conflict appears
to be led by two influential female leaders in the
church, Euodia and Syntyche. The letter then turns
towards its close, with exhortations to rejoice, trust
God, and focus all thoughts on worthy things.
1 My dear, dear friends! I love you so much. I do want
the very best for you. You make me feel such joy, fill
me with such pride.
Don't waver. Stay on track, steady in God.
2 I urge Euodia and Syntyche to iron out their
differences and make up. God doesn't want his
children holding grudges.
3 And, oh, yes, Syzygus, since you're right there to
help them work things out, do your best with them.
These women worked for the Message hand in
hand with Clement and me, and with the other
veterans - worked as hard as any of us.
Remember, their names are in the book of life.
4 Celebrate God all day, every day.
I mean, revel in him!
5 Make it as clear as you can to all you meet that
you're on their side, working with them and not
against them. Help them see that the Master is
about to arrive. He could show up any minute!
6 Don't fret or worry. Instead of worrying, pray.
Let petitions and praises shape your worries into
prayers, letting God know your concerns.
7 Before you know it, a sense of God's wholeness,
everything coming together for good, will come and
settle you down. It's wonderful what happens when
Christ displaces worry at the center of your life.
8 Summing it all up, friends, I'd say you'll do best by
filling your minds and meditating on things true,
noble, reputable, authentic, compelling, gracious —
the best, not the worst; the beautiful, not the ugly;
things to praise, not things to curse.
9 Put into practice what you learned from me, what
you heard and saw and realized. Do that, and God,
who makes everything work together, will work you
into his most excellent harmonies.
————————————————————————
MATTHEW 22:1-14
(The Message)
Jesus tells the parable of the Wedding Banquet.
Those invited did not come, so the king ordered
his servants to hit the streets and alleys to invite
everyone they found to come. One person came
who refused to dress appropriately;
he was promptly thrown out. The conclusion:
many are called, but few are chosen.
1 Jesus responded by telling still more stories.
2 "God's kingdom," he said, "is like a king who threw
a wedding banquet for his son.
3 He sent out servants to call in all the invited guests.
And they wouldn't come!
4 "He sent out another round of servants, instructing
them to tell the guests, 'Look, everything is on the
table, the prime rib is ready for carving.
Come to the feast!'
5 "They only shrugged their shoulders and went off,
one to weed his garden, another to work in his shop.
6 The rest, with nothing better to do, beat up on the
messengers and then killed them.
7 The king was outraged and sent his soldiers to
destroy those thugs and level their city.
8 "Then he told his servants, 'We have a wedding
banquet all prepared but no guests. The ones I
invited weren't up to it.
9 Go out into the busiest intersections in town and
invite anyone you find to the banquet.'
10 The servants went out on the streets and rounded
up everyone they laid eyes on, good and bad,
regardless.
And so the banquet was on - every place filled.
11 "When the king entered and looked over the
scene, he spotted a man who wasn't properly
dressed. 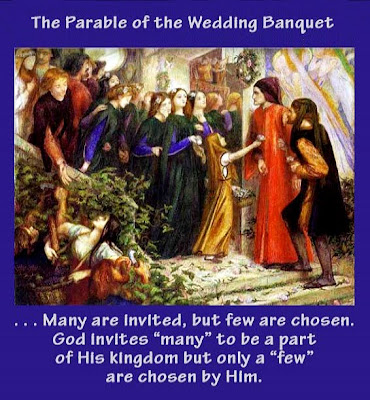 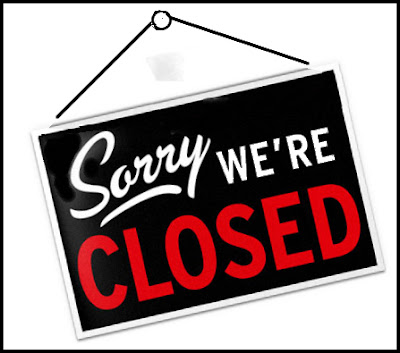 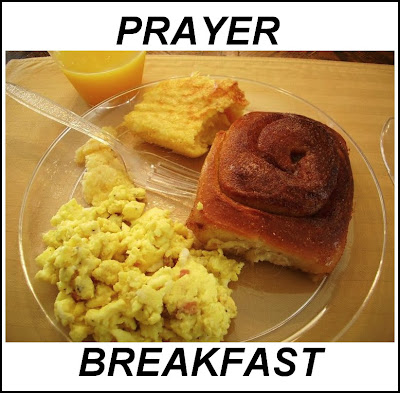 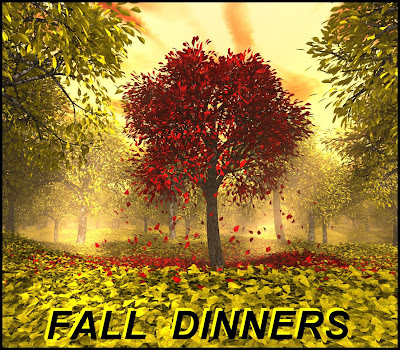