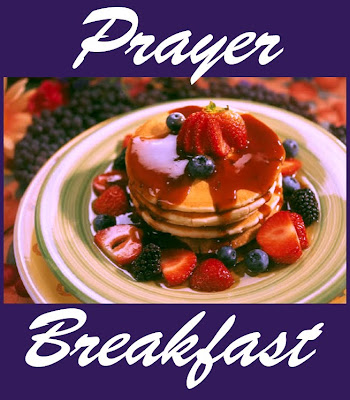 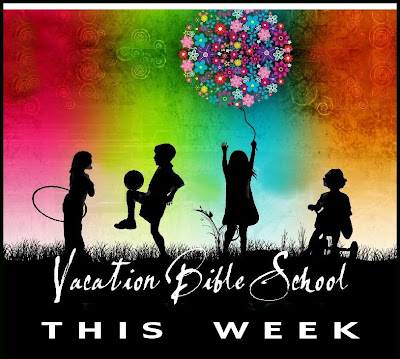 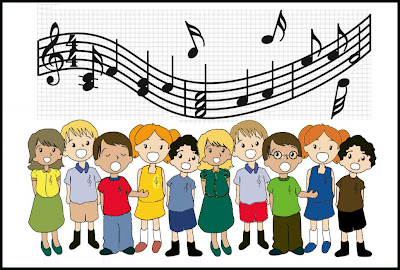 Scripture Readings:
GENESIS 45:1-15
(The Message)
Abraham, Isaac, Jacob, and Joseph, each
of them in his own way, ended up becoming
a representative of all of the people. Joseph,
now second in command in Egypt, reveals
his identity to his brothers and promises to
provide land, food, and protection for the
family during the famine and beyond. Joseph
understands himself to have been sent by
God to help save the lives of others. Joseph
is a missionary to people among whom he
had been a slave.
1 Joseph couldn't hold himself in any longer,
keeping up a front before all his attendants. He
cried out, "Leave! Clear out - everyone leave!"
So there was no one with Joseph when he
identified himself to his brothers.
2 But his sobbing was so violent that the
Egyptians couldn't help but hear him. The news
was soon reported to Pharaoh's palace.
3 Joseph spoke to his brothers: "I am Joseph.
Is my father really still alive?" But his brothers
couldn't say a word. They were speechless -
they couldn't believe what they were hearing
and seeing. 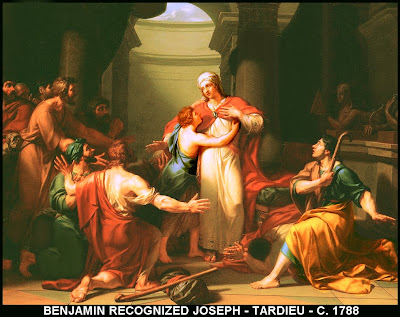 4 "Come closer to me," Joseph said to his
brothers. They came closer. "I am Joseph your
brother whom you sold into Egypt.
5 But don't feel badly, don't blame yourselves
for selling me. God was behind it. God sent me
here ahead of you to save lives.
6 There has been a famine in the land now for
two years; the famine will continue for five more
years - neither plowing nor harvesting. 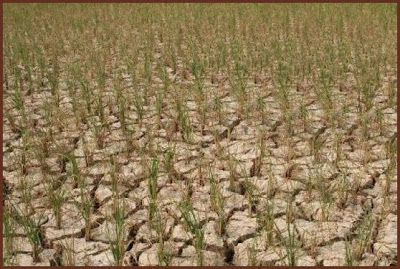 7 God sent me on ahead to pave the way and
make sure there was a remnant in the land, to
save your lives in an amazing act of deliverance.
8 So you see, it wasn't you who sent me here but
God. He set me in place as a father to Pharaoh, 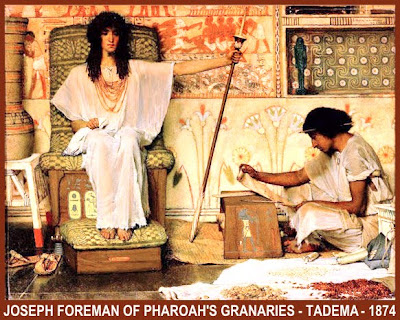 put me in charge of his personal affairs, and
made me ruler of all Egypt.
9 "Hurry back to my father. Tell him, 'Your son
Joseph says: I'm master of all of Egypt. Come
as fast as you can and join me here.
10 I'll give you a place to live in Goshen where
you'll be close to me - you, your children, your
grandchildren, your flocks, your herds, and
anything else you can think of.
11 I'll take care of you there completely. There
are still five more years of famine ahead; I'll
make sure all your needs are taken care of,
you and everyone connected with you - you
won't want for a thing.'
12 "Look at me. You can see for yourselves,
and my brother Benjamin can see for himself,
that it's me, my own mouth, telling you all this.
13 Tell my father all about the high position I
hold in Egypt, tell him everything you've seen
here, but don't take all day - hurry up and
get my father down here." 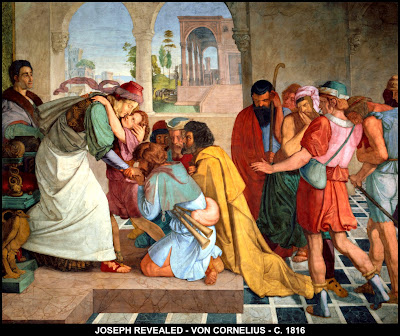 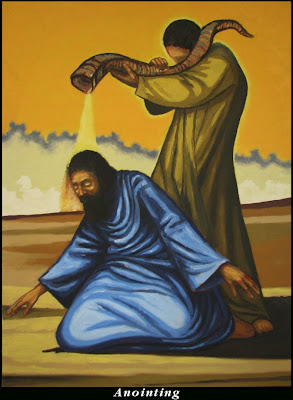 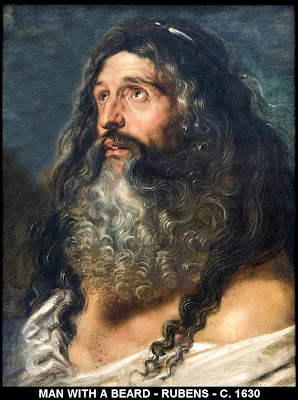 3 It is as if the dew of Hermon were falling on
Mount Zion. For there the LORD bestows his
blessing, even life forevermore.
—————————————————————–––
ROMANS 11:1-2, 29-32
(The Message)
Paul concludes his divergence on theological
connection between God's covenant with
Israel and the Jewish-Gentile church with a
strong affirmation of Israel's place in God's
saving intent toward the whole world. Israel's
place is permanently secure, while Gentiles
are like grafts of a wild olive tree into a
domesticated olive tree. 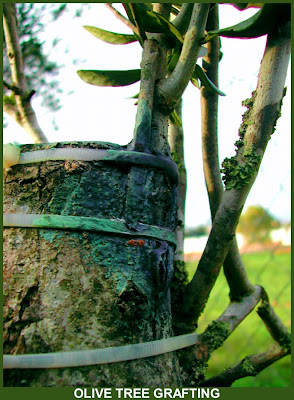 THE REMNANT OF ISRAEL
1 Does this mean, then, that God is so fed up
with Israel that he'll have nothing more to do with
them? Hardly. Remember that I, the one writing
these things, am an Israelite, a descendant of
Abraham out of the tribe of Benjamin. You can't
get much more Semitic than that!
2 So we're not talking about repudiation. God has
been too long involved with Israel, has too much
invested, to simply wash his hands of them. Do
you remember that time Elijah was agonizing
over this same Israel and cried out in prayer?
3 God, they murdered your prophets, They
trashed your altars; I'm the only one left and now
they're after me!
4 And do you remember God's answer? I still
have seven thousand who haven't quit, Seven
thousand who are loyal to the finish.
ROMANS 11:29-36
29 God's gifts and God's call are under full
warranty - never canceled, never rescinded.
30 There was a time not so long ago when
you were on the outs with God. But then the
Jews slammed the door on him and things
opened up for you.
31 Now they are on the outs. But with the
door held wide open for you, they have a
way back in.
32 In one way or another, God makes sure
that we all experience what it means to be
outside so that he can personally open the
door and welcome us back in.
33 Have you ever come on anything quite
like this extravagant generosity of God, this
deep, deep wisdom? It's way over our heads.
We'll never figure it out.
34 Is there anyone around who can explain
God? Anyone smart enough to tell him
what to do?
35 Anyone who has done him such a huge
favor that God has to ask his advice?
36 Everything comes from him; Everything
happens through him; Everything ends up
in him. Always glory!
Always praise! Yes. Yes. Yes.
—————————————————————–––
MATTHEW 15:10-28
(The Message)
Jesus tells the crowd that it is what comes
out of the heart that pollutes us. Then Jesus
discovers great faith coming from a foreigner
(the Canaanite woman) who won't take "no"
for an answer. The second story illustrates
the challenges raised by the first, but taken
up by several notches, especially when the
unclean mother of an unclean girl refuses to
be dismissed even by very harsh words
reflecting Jesus' own sense of calling to offer
ministry for the Jewish people exclusively.
There just weren't many Jewish people in that
region, and she certainly was not among them.
In short, he's on vacation and he has no
intention of reaching out to this woman.
She insists — constantly looking for any
opening at all, finds one in his dismissive and
actually insulting reference to the Gentiles as
"house pets" — and prevails.

Immediately, from this point forward, Jesus
begins a more inclusive focus. We see Him
teaching, healing and feeding a mixed crowd
of Jewish and Gentile people.
10 He then called the crowd together and said,
"Listen, and take this to heart.
11 It's not what you swallow that pollutes your
life, but what you vomit up."
12 Later his disciples came and told him, "Did
you know how upset the Pharisees were when
they heard what you said?"
13 Jesus shrugged it off. "Every tree that wasn't
planted by my Father in heaven will be pulled up
by its roots.
14 Forget them. They are blind men leading
blind men. When a blind man leads a blind man,
they both end up in the ditch."
15 Peter said, "I don't get it. Put it in plain language."
16 Jesus replied, "You too? Are you being willfully
stupid?
17 Don't you know that anything that is swallowed
works its way through the intestines and is finally
defecated?
18 But what comes out of the mouth gets its start
in the heart.
19 It's from the heart that we vomit up evil
arguments, murders, adulteries, fornications,
thefts, lies, and cussing.
20 That's what pollutes. Eating or not eating
certain foods, washing or not washing your
hands - that's neither here nor there." Healing
the People
21 From there Jesus took a trip to Tyre and Sidon.
22 They had hardly arrived when a Canaanite
woman came down from the hills and pleaded,
"Mercy, Master, Son of David! My daughter is
cruelly afflicted by an evil spirit." 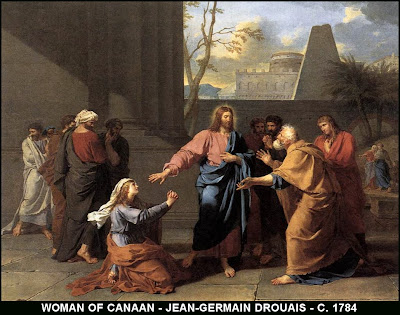 23 Jesus ignored her. The disciples came and
complained, "Now she's bothering us. Would you
please take care of her? She's driving us crazy."
24 Jesus refused, telling them, "I've got my hands
full dealing with the lost sheep of Israel."
25 Then the woman came back to Jesus, went
to her knees, and begged. "Master, help me."
26 He said, "It's not right to take bread out of
children's mouths and throw it to dogs."
27 She was quick: "You're right, Master, but even
beggar dogs do get scraps from the master's table." 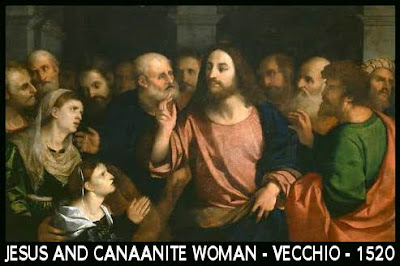 When God was ready to judge the world with
a flood, He enlisted Noah. Noah built the boat
and became a bystander as God rounded up
the animals and did the rest.

When God desired to build a nation for Himself,
He prompted Abraham to move. He was
obedient and God did the rest as Abraham
became a bystander.

When God heard His children groaning under
Egyptian bondage, He appeared in a burning
bush to motivate Moses. Moses accepted the
challenge and became a bystander as God
performed miracle after miracles to grow HIS
people free.

And when it was time to send out the gospel
on Missionary Journeys, God commandeered
a strong willed Paul. Paul joined the Jesus
Team and wrote it all down as he became a
bystander as God worked miracles to grow
HIS church throughout the world.

Noah, Abraham, Moses and Paul were four
of the most ordinary of men, but God had
work to do, and He knew just who to do it
with. God has always given His people
assignments that are too big for them to
handle alone, so that a watching world can
see—not what Noah, Abraham, Moses or Paul
can do- but what the power of God will do.
For God to do his work each of these men
became bystanders as the Glory of God
moved throughout the earth.

Don’t get me wrong here:

What we are doing no way compares to these
four Biblical giants, but the principle is the
same. God assigns something so big, so large
to us that it is clear no man had anything to do
with it.