REMINDERS —
WEDNESDAY, MARCH 30TH —
LENTEN COMBINED WORSHIP SERVICE IN
ADAIR U.M.C. AT 7 P.M.
• This service will be held downstairs, but
next Sunday's service will be in the upstairs
sanctuary • 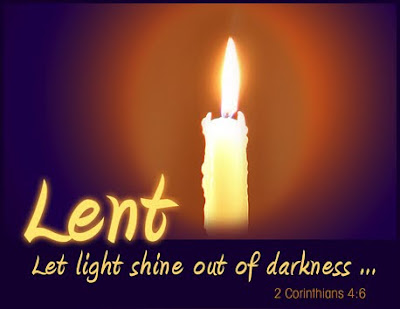 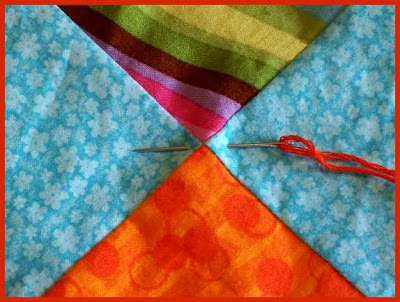 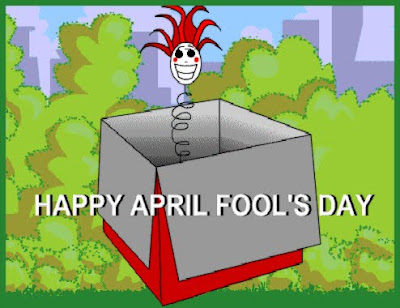 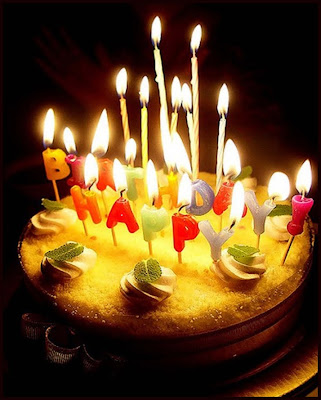 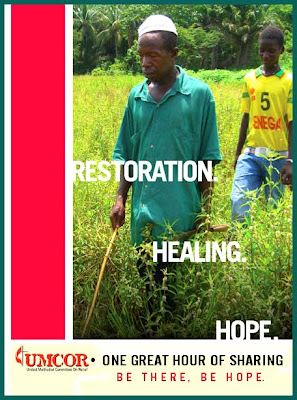 This offering underwrites the administrative
costs of the United Methodist Committee on
Relief which offers worldwide emergency
relief & long-term disaster support with no
overhead for its services.
This agency has been very busy recently.

SCRIPTURE READINGS:
1 SAMUEL 16:1–13
(The Message)
God sends Samuel to find and anoint as king
one of the sons of Jesse; "
. . . the LORD does not see as mortals see."
1 God addressed Samuel: "So, how long are you
going to mope over Saul? You know I've rejected
him as king over Israel. Fill your flask with
anointing oil and get going. I'm sending you to
Jesse of Bethlehem. I've spotted the very king I
want among his sons."
2 "I can't do that," said Samuel. "Saul will hear
about it and kill me."
3 Make sure Jesse gets invited. I'll let you know
what to do next. I'll point out the one you are to
anoint."
4 Samuel did what God told him. When he arrived
at Bethlehem, the town fathers greeted him, but
apprehensively. "Is there something wrong?"
5 "Nothing's wrong. I've come to sacrifice this
heifer and lead you in the worship of God.
Prepare yourselves, be consecrated, and join me
in worship." He made sure Jesse and his sons
were also consecrated and called to worship.
6 When they arrived, Samuel took one look at
Eliab and thought, "Here he is! God's anointed!" 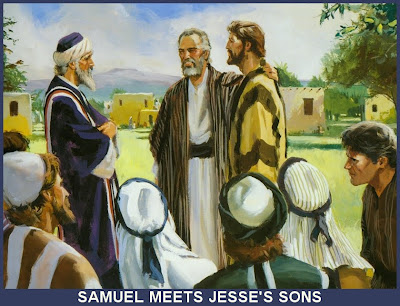 7 But God told Samuel, "Looks aren't everything.
Don't be impressed with his looks and stature.
I've already eliminated him. God judges persons
differently than humans do. Men and women look
at the face; God looks into the heart."
8 Jesse then called up Abinadab and presented
him to Samuel. Samuel said, "This man isn't God's
choice either."
9 Next Jesse presented Shammah. Samuel said,
"No, this man isn't either."
10 Jesse presented his seven sons to Samuel.
Samuel was blunt with Jesse, "God hasn't chosen
any of these."
11 Then he asked Jesse, "Is this it? Are there no
more sons?" "Well, yes, there's the runt. But he's
out tending the sheep." Samuel ordered Jesse,
"Go get him. We're not moving from this spot until
he's here."
12 Jesse sent for him. He was brought in, the
very picture of health - bright-eyed, good-looking.
God said, "Up on your feet! Anoint him!
This is the one." 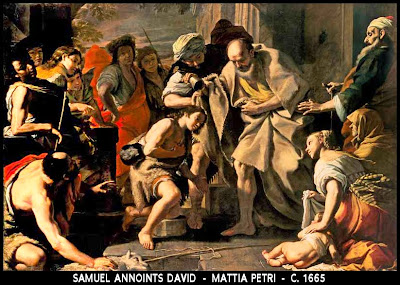 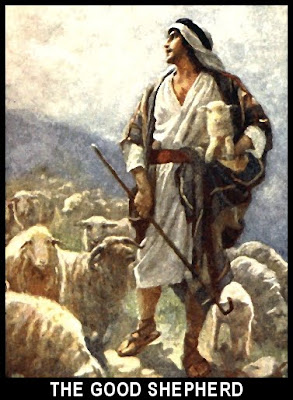 1 God, my shepherd! I don't need a thing.
2 You have bedded me down in lush meadows, you
find me quiet pools to drink from. 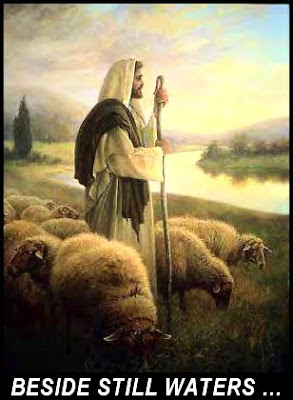 3 True to your word, you let me catch my breath and
send me in the right direction. 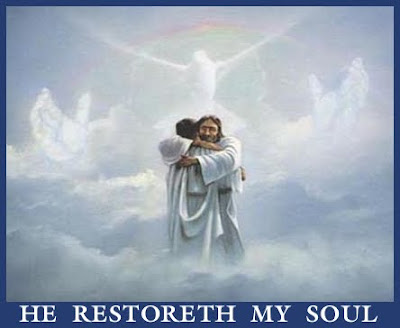 4 Even when the way goes through Death Valley, I'm
not afraid when you walk at my side. Your trusty
shepherd's crook makes me feel secure.
5 You serve me a six-course dinner right in front of
my enemies. You revive my drooping head; my cup
brims with blessing. 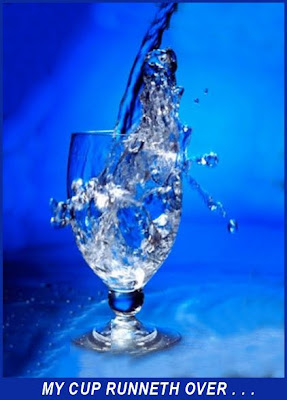 6 Your beauty and love chase after me every day of
my life. I'm back home in the house of God for the
rest of my life.
————————————————————————
EPHESIANS 5:8–14
(The Message)
"For once you were darkness, but now in the Lord
you are light. Live as children of light."
8 You groped your way through that murk once, but
no longer. You're out in the open now. The bright light
of Christ makes your way plain. So no more stumbling
around. Get on with it!
9 The good, the right, the true - these are the actions
appropriate for daylight hours.
10 Figure out what will please Christ, and then do it.
11 Don't waste your time on useless work, mere busy
work, the barren pursuits of darkness. Expose these
things for the sham they are.
12 It's a scandal when people waste their lives on
things they must do in the darkness where no one will
see.
13 Rip the cover off those frauds and see how
attractive they look in the light of Christ.
14 Wake up from your sleep, Climb out of your
coffins; Christ will show you the light!
————————————————————————
JOHN 9:1–41
(The Message)
Jesus puts mud on the eyes of a man born
blind and sends him to wash in the pool at
Siloam. The blind man gains his sight and
immediately becomes an evangelist!
1 Walking down the street, Jesus saw a man blind
from birth.
2 His disciples asked, "Rabbi, who sinned: this
man or his parents, causing him to be born blind?"
3 Jesus said, "You're asking the wrong question.
You're looking for someone to blame. There is no
such cause-effect here. Look instead for what God
can do.
4 We need to be energetically at work for the One
who sent me here, working while the sun shines.
When night falls, the workday is over.
5 For as long as I am in the world, there is plenty
of light. I am the world's Light."
6 He said this and then spit in the dust, made a
clay paste with the saliva, rubbed the paste on
the blind man's eyes, 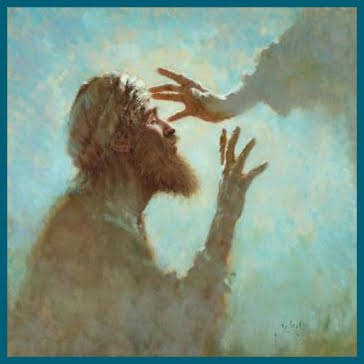 7 and said, "Go, wash at the Pool of Siloam"
(Siloam means "Sent"). The man went and
washed - and saw.
8 Soon the town was buzzing. His relatives and
those who year after year had seen him as a blind
man begging were saying, "Why, isn't this the man
we knew, who sat here and begged?"
9 Others said, "It's him all right!" But others objected,
"It's not the same man at all. It just looks like him."
He said, "It's me, the very one."
10 They said, "How did your eyes get opened?"
11 "A man named Jesus made a paste and rubbed
it on my eyes and told me, 'Go to Siloam and wash.'
I did what he said. When I washed, I saw."
12 "So where is he?" "I don't know."
13 They marched the man to the Pharisees.
14 This day when Jesus made the paste and
healed his blindness was the Sabbath.
15 The Pharisees grilled him again on how he
had come to see. He said, "He put a clay paste
on my eyes, and I washed, and now I see."
16 Some of the Pharisees said, "Obviously, this
man can't be from God. He doesn't keep the
Sabbath." Others countered, "How can a bad
man do miraculous, God-revealing things like
this?" There was a split in their ranks.
17 They came back at the blind man, "You're the
expert. He opened your eyes. What do you say
about him?" He said, "He is a prophet."
18 The Jews didn't believe it, didn't believe the
man was blind to begin with. So they called the
parents of the man now bright-eyed with sight.
19 They asked them, "Is this your son, the one
you say was born blind? So how is it that he now
sees?"
20 His parents said, "We know he is our son,
and we know he was born blind.
21 But we don't know how he came to see -
haven't a clue about who opened his eyes. Why
don't you ask him? He's a grown man and can
speak for himself."
22 (His parents were talking like this because
they were intimidated by the Jewish leaders, who
had already decided that anyone who took a
stand that this was the Messiah would be kicked
out of the meeting place.
23 That's why his parents said, "Ask him. He's a
grown man.")
24 They called the man back a second time - the
man who had been blind - and told him, "Give
credit to God. We know this man is an impostor."
25 He replied, "I know nothing about that one way
or the other. But I know one thing for sure: I was
blind . . . I now see." 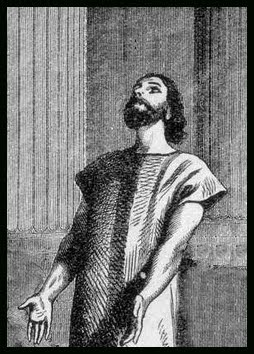 26 They said, "What did he do to you? How did
he open your eyes?"
27 "I've told you over and over and you haven't
listened. Why do you want to hear it again? Are
you so eager to become his disciples?"
28 With that they jumped all over him. "You might
be a disciple of that man, but we're disciples of Moses.
29 We know for sure that God spoke to Moses,
but we have no idea where this man even comes
from."
30 The man replied, "This is amazing! You claim
to know nothing about him, but the fact is, he
opened my eyes!
31 It's well known that God isn't at the beck and
call of sinners, but listens carefully to anyone
who lives in reverence and does his will.
32 That someone opened the eyes of a man born
blind has never been heard of - ever.
33 If this man didn't come from God, he wouldn't
be able to do anything."
34 They said, "You're nothing but dirt! How dare
you take that tone with us!" Then they threw him
out in the street.
35 Jesus heard that they had thrown him out,
and went and found him. He asked him, "Do
you believe in the Son of Man?"
36 The man said, "Point him out to me, sir, so
that I can believe in him."
37 Jesus said, "You're looking right at him.
Don't you recognize my voice?"
38 "Master, I believe," the man said, and
worshiped him.
39 Jesus then said, "I came into the world to
bring everything into the clear light of day,
making all the distinctions clear, so that those
who have never seen will see, and those who
have made a great pretense of seeing will be
exposed as blind."
40 Some Pharisees overheard him and said,
"Does that mean you're calling us blind?"
41 Jesus said, "If you were really blind, you
would be blameless, but since you claim to see
everything so well, you're accountable for every
fault and failure.
————————————————————————
Ciala's Baptism on Sunday 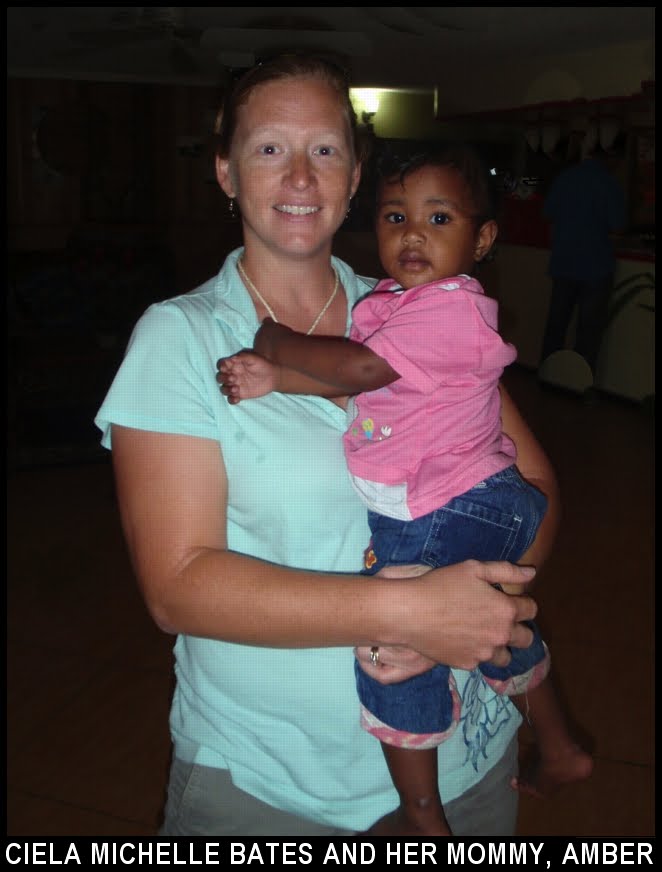 I wish to invite all family and friends to my
grand daughter Ciala's baptism at Adair United
Methodist Church today, Sunday April 3rd.
Worship Service will be in the upstairs
sanctuary and begin at 10:30 AM.
Adair United Methodist Church is located at
401 Cass Street in Adair Iowa. All parking is
on street or in the driveway of the parsonage
next door at 403 Cass Street.

There are two motels in Adair Iowa.
• The first is a Super 8 and the other is
• The Adair Budget Inn.
They are both located at exit 76 of I-80. 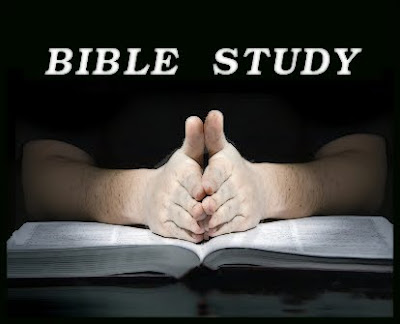 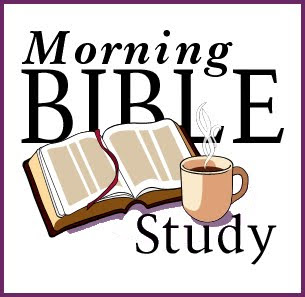 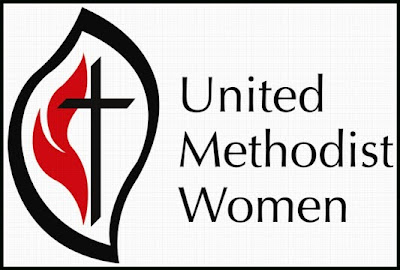 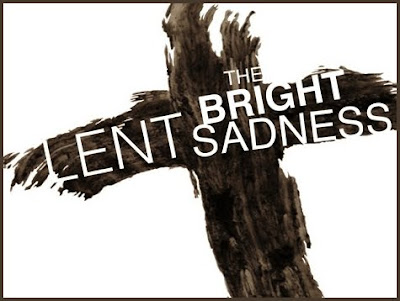 Travel safely, With Love of God to all,
Grandma Lynn Gardner
Posted by Pastor Melodee Carstens