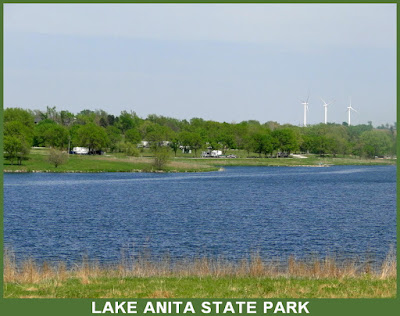 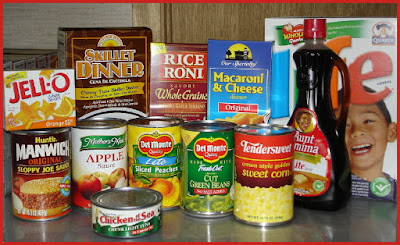 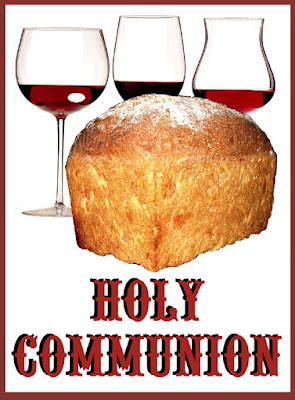 • HOLY COMMUNION TODAY
Happy Birthday Dorothy Oaks!
———————————————————
SCRIPTURE READINGS ———————————————————
2 SAMUEL 18:5-15, 31-33
THE MESSAGE (MSG)
David's son Absalom had begun a civil war against his father. Still, David ordered his army to “deal gently” with him. When Absalom was found stuck in a tree, he was executed and brought to David. David wept bitterly.
5 Then the king ordered Joab and
Abishai and Ittai, “Deal gently for my
sake with the young man Absalom.”
The whole army heard what the king
commanded the three captains
regarding Absalom.
6-8 The army took the field to meet
Israel. It turned out that the battle was
joined in the Forest of Ephraim. The
army of Israel was beaten badly there
that day by David’s men, a terrific
slaughter—twenty thousand men! There
was fighting helter-skelter all over the
place—the forest took more lives that
day than the sword!
9-10 Absalom ran into David’s men, but
was out in front of them riding his mule,
when the mule ran under the branches of
a huge oak tree. Absalom’s head was
caught in the oak and he was left
dangling between heaven and earth, the
mule running right out from under him. 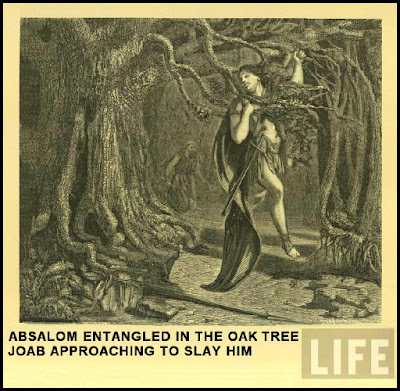 A solitary soldier saw him and reported it
to Joab, “I just saw Absalom hanging
from an oak tree!”
11 Joab said to the man who told him, “If
you saw him, why didn’t you kill him then
and there? I’d have rewarded you with
ten pieces of silver and a fancy belt.”
12-13 The man told Joab, “Even if I’d had
a chance at a thousand pieces of silver, I
wouldn’t have laid a hand on the king’s
son. We all heard the king command you
and Abishai and Ittai, ‘For my sake,
protect the young man Absalom.’ Why,
I’d be risking my life, for nothing is
hidden from the king. And you would
have just stood there!”
14-15 Joab said, “I can’t waste my time
with you.” He then grabbed three knives
and stabbed Absalom in the heart while
he was still alive in the tree; by then
Absalom was surrounded by ten of
Joab’s armor bearers; they hacked
away at him and killed him.
———————————————————
PSALM 130 (UMH 848)
THE MESSAGE (MSG)
A response to the story of David's deep grief over Absalom.A psalm often used at funerals.

A PILGRIM SONG
1-2 Help, God—the bottom has fallen out
of my life!
Master, hear my cry for help!
Listen hard! Open your ears!
Listen to my cries for mercy.

3-4 If you, God, kept records on wrong
doings,
who would stand a chance?
As it turns out, forgiveness is your habit,
and that’s why you’re worshiped.

7-8 O Israel, wait and watch for God—
with God’s arrival comes love,
with God’s arrival comes generous
redemption.
No doubt about it—he’ll redeem Israel,
buy back Israel from captivity to sin.
———————————————————
EPHESIANS 4:25-5:2
THE MESSAGE (MSG)
Paul encourages congregations to give up practices that might lead to broken relationships with God and others, and engage in practices that will build up community.
25 What this adds up to, then, is this: no
more lies, no more pretense. Tell your
neighbor the truth. In Christ’s body
we’re all connected to each other, after
all. When you lie to others, you end up
lying to yourself.
26-27 Go ahead and be angry. You do
well to be angry—but don’t use your
anger as fuel for revenge. And don’t
stay angry. Don’t go to bed angry. Don’t
give the Devil that kind of foothold in
your life.
28 Did you use to make ends meet by
stealing? Well, no more! Get an honest
job so that you can help others who can’t
work. 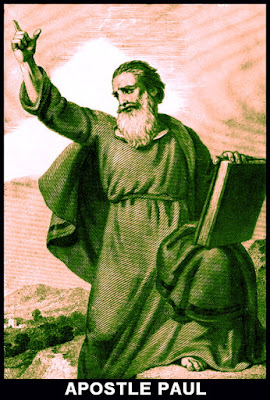 29 Watch the way you talk. Let nothing
foul or dirty come out of your mouth.
Say only what helps, each word a gift.
30 Don’t grieve God. Don’t break his
heart. His Holy Spirit, moving and
breathing in you, is the most intimate
part of your life, making you fit for
himself. Don’t take such a gift for granted.
31-32 Make a clean break with all cutting,
backbiting, profane talk. Be gentle with
one another, sensitive. Forgive one
another as quickly and thoroughly as
God in Christ forgave you.
WAKE UP FROM YOUR SLEEP
5 1-2 Watch what God does, and then
you do it, like children who learn proper
behavior from their parents. Mostly what
God does is love you. Keep company
with him and learn a life of love.
Observe how Christ loved us. His love
was not cautious but extravagant. He
didn’t love in order to get something
from us but to give everything of
himself to us. Love like that.
———————————————————
JOHN 6:35-38, 41-51
THE MESSAGE (MSG)
Jesus says the Father, not his own teaching, draws people to the true bread that is coming down from heaven." Those who “eat of him” are receiving eternal life.
JOHN 6:35-38 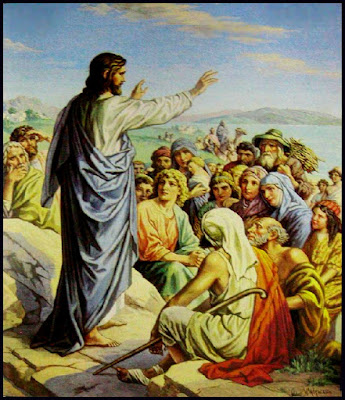 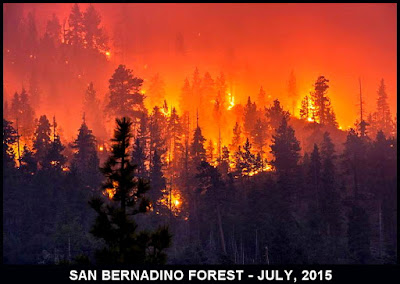 Our prayers are with with thousands of
our nations firefighters who are trying to
find a way to end this terrible massive
destruction. 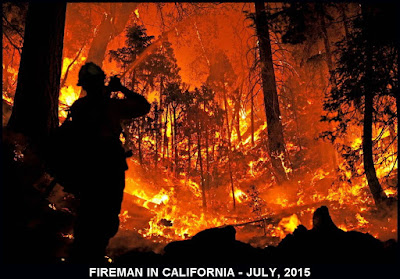 ———————————————————
Thank you for your kind contributions
of love and loyalty this week. You have
made an enormous difference and we
are indeed indebted to you!