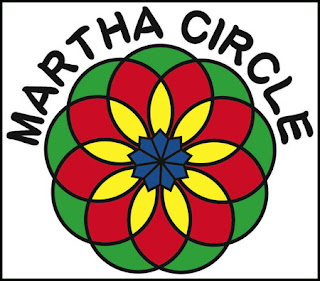 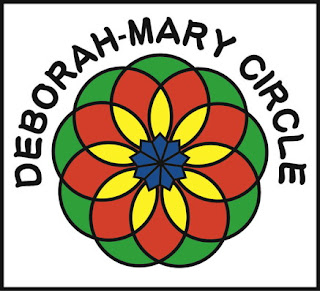 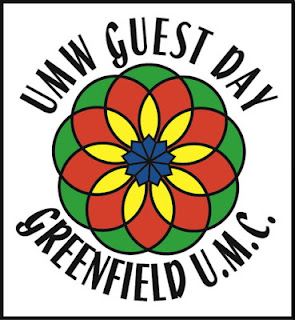 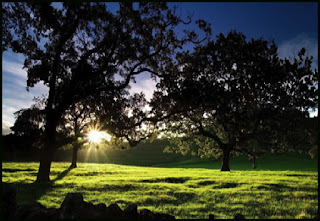 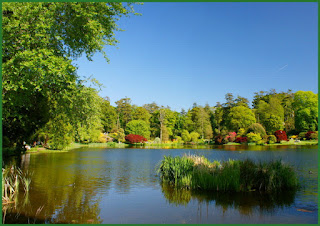 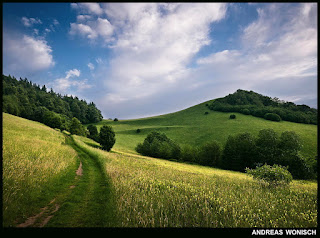 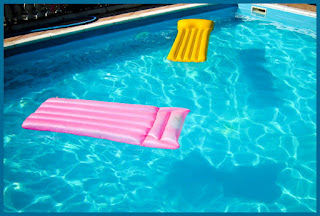 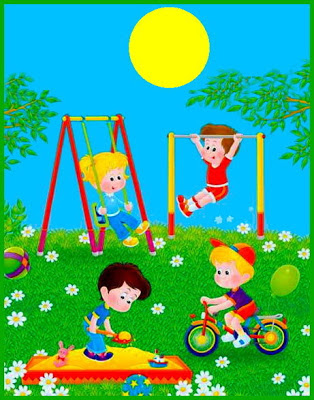 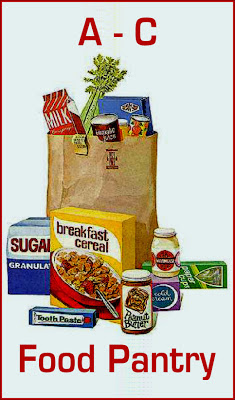 ≈≈≈≈≈≈≈≈≈≈≈≈≈≈≈≈≈≈≈≈≈≈≈≈≈≈≈≈≈≈≈≈≈≈≈≈≈≈≈
SUNDAY, JUNE 23RD —
Fifth Sunday after Pentecost
Color: Green
—————————————————————
SCRIPTURE READINGS —
1 KINGS 19:1-18
THE MESSAGE (MSG)
We’ve gone from a confrontation on Mt.
Carmel in chapter 18 back to Elijah’s extended
sojourn in Zarephath (chapter 17), and now
we’ve gone from another confrontation with
Ahab (chap. 21) back to a time of doubt,
possibly depression and hiding (chapter 19).In this week’s reading, Elijah was fleeing for
his life—not only to preserve himself from
being killed by Jezebel and Ahab’s henchmen,
but more importantly because it seemed
everything he had worked for was about to be
extinguished. Elijah, prophet of God, is in effect
going AWOL. He’s not prophesying during this
forty-day journey. In fact, he’s not even making
himself available for such duty.  It’s not clear if
Elijah had any particular goal in mind, other
than to get to Sinai. It’s not clear he had any
clue what would happen after that.
REVENGE FROM JEZEBEL
1-2 Ahab reported to Jezebel everything that
Elijah had done, including the massacre of the
prophets. Jezebel immediately sent a messenger
to Elijah with her threat: "The gods will get you
for this and I'll get even with you! By this time
tomorrow you'll be as dead as any one of those
prophets." 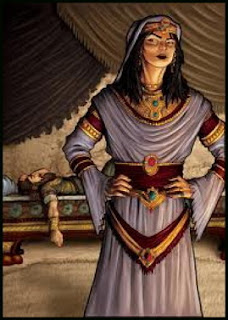 3-5 When Elijah saw how things were, he ran for
dear life to Beersheba, far in the south of Judah.
He left his young servant there and then went on
into the desert another day's journey. He came to
a lone broom bush and collapsed in its shade,
wanting in the worst way to be done with it all–to
just die: "Enough of this, God! Take my life—I'm
ready to join my ancestors in the grave!"
Exhausted, he fell asleep under the lone broom
bush. 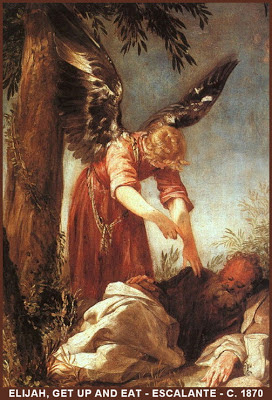 Suddenly an angel shook him awake and said,
"Get up and eat!"

6 He looked around and, to his surprise, right by
his head were a loaf of bread baked on some
coals and a jug of water. He ate the meal and went
back to sleep. 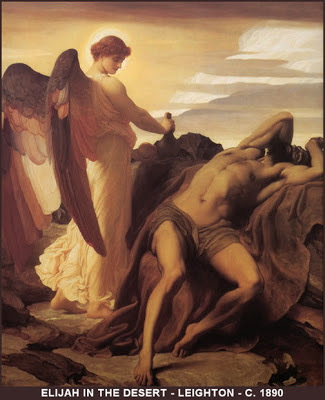 7 The angel of God came back, shook him awake
again, and said, "Get up and eat some more—
you've got a long journey ahead of you."

8-9 He got up, ate and drank his fill, and set out.
Nourished by that meal, he walked forty days and
nights, all the way to the mountain of God, Horeb. 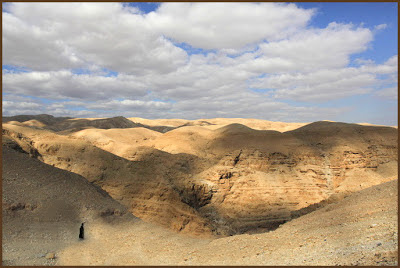 When he got there, he crawled into a cave
and went to sleep.

Then the word of God came to him: "So Elijah,
what are you doing here?"

10 "I've been working my heart out for the God-
of-the-Angel-Armies," said Elijah. "The people of
Israel have abandoned your covenant, destroyed
the places of worship, and murdered your
prophets. I'm the only one left, and now they're
trying to kill me."

11-12 Then he was told, "Go, stand on the
mountain at attention before God.
God will pass by."

A hurricane wind ripped through the mountains
and shattered the rocks before God, but God
wasn't to be found in the wind; after the wind an
earthquake, but God wasn't in the earthquake; 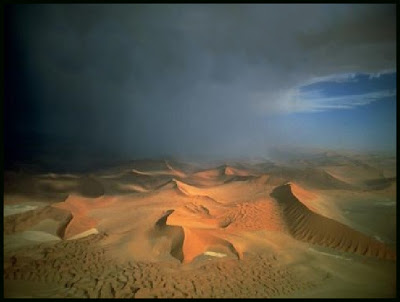 13-14 When Elijah heard the quiet voice, he
muffled his face with his great cloak, went to the
mouth of the cave, and stood there. A quiet voice
asked, "So Elijah, now tell me, what are you doing
here?" Elijah said it again, "I've been working my
heart out for God, the God-of-the-Angel-Armies,
because the people of Israel have abandoned your
covenant, destroyed your places of worship, and
murdered your prophets. I'm the only one left,
and now they're trying to kill me."

15-18 God said, "Go back the way you came
through the desert to Damascus. When you get
there anoint Hazael; make him king over Aram.
Then anoint Jehu son of Nimshi; make him king
over Israel. Finally, anoint Elisha son of Shaphat
from Abel Meholah to succeed you as prophet.
Anyone who escapes death by Hazael will be
killed by Jehu; and anyone who escapes death
by Jehu will be killed by Elisha. Meanwhile, I'm
preserving for myself seven thousand souls: the
knees that haven't bowed to the god Baal, the
mouths that haven't kissed his image."
—————————————————————
PSALM 42 (UMH 777)
THE MESSAGE (MSG)
"Why are you cast down, O my soul? And
why are you disquieted with me?" The
psalmist struggles with hope and trust, much
as Elijah does in the first reading.
A PSALM OF THE SONS OF KORAH
1-3 A white-tailed deer drinks from the creek; 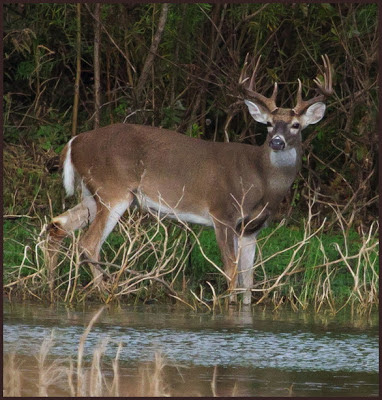 I want to drink God,
deep draughts of God.
I'm thirsty for God-alive.
I wonder, "Will I ever make it—
arrive and drink in God's presence?"
I'm on a diet of tears—
tears for breakfast, tears for supper.
All day long
people knock at my door,
Pestering,
"Where is this God of yours?"

4 These are the things I go over and over,
emptying out the pockets of my life.
I was always at the head of the worshiping
crowd,
right out in front,
Leading them all,
eager to arrive and worship,
Shouting praises, singing thanksgiving—
celebrating, all of us, God's feast!

5 Why are you down in the dumps, dear soul?
Why are you crying the blues?
Fix my eyes on God—
soon I'll be praising again.
He puts a smile on my face.
He's my God.

6-8 When my soul is in the dumps, I rehearse
everything I know of you,
From Jordan depths to Hermon heights,
including Mount Mizar.
Chaos calls to chaos,
to the tune of whitewater rapids.
Your breaking surf, your thundering breakers
crash and crush me.
Then God promises to love me all day,
sing songs all through the night!
My life is God's prayer.

9-10 Sometimes I ask God, my rock-solid God,
"Why did you let me down?
Why am I walking around in tears,
harassed by enemies?"
They're out for the kill, these
tormentors with their obscenities,
Taunting day after day,
"Where is this God of yours?"

11 Why are you down in the dumps, dear soul?
Why are you crying the blues?
Fix my eyes on God—
soon I'll be praising again.
He puts a smile on my face.
He's my God.
——————————————————————
GALATIANS 3:23-29
THE MESSAGE (MSG)
The pedagogue (literally in Greek, "child-guide") in Greco-Roman culture of Galatia would have been on the household staff (either slave or free) who was responsible for the education and the protection of younger male children. He would have accompanied them to school and to public events, and perhaps acted as tutor for both schoolwork and etiquette, until the children had grown to young adulthood.Under the law, we are all under a disciplinarian. Baptized into Christ, we can all live by faith. 23-24 Until the time when we were mature
enough to respond freely in faith to the living
God, we were carefully surrounded and protected
by the Mosaic law. The law was like those Greek
tutors, with which you are familiar, who escort
children to school and protect them from danger
or distraction, making sure the children will really
get to the place they set out for.

25-27 But now you have arrived at your
destination: By faith in Christ you are in direct
relationship with God. Your baptism in Christ was
not just washing you up for a fresh start. It also
involved dressing you in an adult faith wardrobe
— Christ's life, the fulfillment of God's original
promise.
• IN CHRIST'S FAMILY •
28-29 In Christ's family there can be no division
into Jew and non-Jew, slave and free, male and
female. Among us you are all equal. That is, we
are all in a common relationship with Jesus
Christ. Also, since you are Christ's family, then
you are Abraham's famous "descendant," heirs
according to the covenant promises.
——————————————————————
LUKE 8:26-39
THE MESSAGE (MSG)
Jesus and the Gerasene man that is possessed by demons. In Decapolis — an area of northern Palestine that included ten Roman military out-post cities and represented the base of Roman military control of the region, Jesus casts out "Legion," and the man is delivered, clothed and again in his right mind. The locals are terrified.Instead of further isolating the demoniac, Jesus sets him free from the powers that possessed him and makes it possible for him to reconnect with the people and community around him. He sends the freed man back into his culture to bear witness to all God had done for him.
THE MADMAN AND THE PIGS
26-29 They sailed on to the country of the
Gerasenes, directly opposite Galilee. As he
stepped out onto land, a madman from town met
him; he was a victim of demons. He hadn't worn
clothes for a long time, nor lived at home; he
lived in the cemetery. When he saw Jesus he
screamed, fell before him, and bellowed, "What
business do you have messing with me? You're
Jesus, Son of the High God, but don't give me a
hard time!" (The man said this because Jesus
had started to order the unclean spirit out of
him.) Time after time the demon threw the man
into convulsions. He had been placed under
constant guard - tied with chains and shackles,
but crazed and driven wild by the demon, he
would shatter the bonds.

"Mob. My name is Mob," he said, because many
demons afflicted him. And they begged Jesus
desperately not to order them to the bottomless
pit.

32-33 A large herd of pigs was browsing and
rooting on a nearby hill. The demons begged
Jesus to order them into the pigs. He gave the
order. It was even worse for the pigs than for the
man. Crazed, they stampeded over a cliff into the
lake and drowned.

34-36 Those tending the pigs, scared to death,
bolted and told their story in town and country.
People went out to see what had happened. They
came to Jesus and found the man from whom the
demons had been sent, sitting there at Jesus' feet,
wearing decent clothes and making sense. It was a
holy moment, and for a short time they were more
reverent than curious. Then those who had seen it
happen told how the demoniac had been saved. 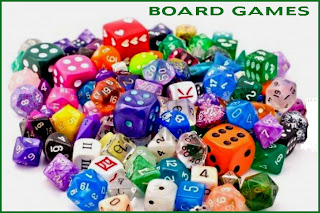 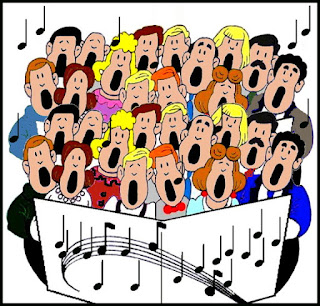 The dates have been set for summer
• • VACATION BIBLE SCHOOL • •