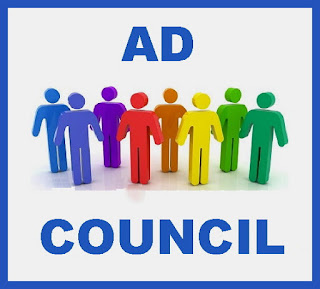 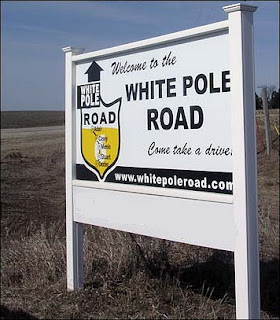 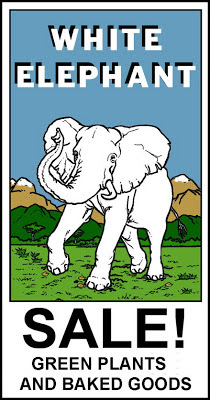 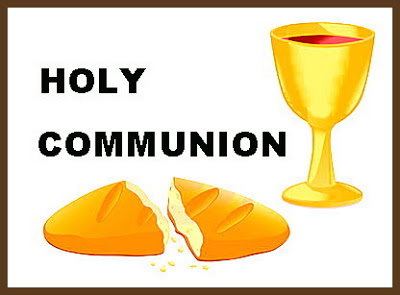 SCRIPTURE READINGS
READINGS ARE NOT CHOSEN TO RELATE
TO EACH OTHER, EXCEPT THE PSALM.
—————————————————————
I KINGS 18:20-39
THE MESSAGE (MSG)
Elijah takes on the prophets of Baal on
Mount Carmel.About 2800 years ago, Ahab, King of Israel,
calls for a contest, probably believing the
Baalists will easily win.  Elijah, however, sets
the terms. The contest will be about sacrifices.
Baalists and Yahwists shared a common
basic practice and beliefs in sacrifice, even if
ritual practices did differ dramatically. Both
believed sacrifices were about offering their
god a pleasing aroma by burning or cooking
items on an altar. And both believed that with
proper ritual presiders, one needn't start the
fire: The god could do that.  The Baalists
believed their god Baal would start the fire if
they were fervent in their rituals.  For 450 Baalist priests - - - nothing.Elijah doused the offering with water, said a simple prayer, and there was an immediate
all consuming blaze.  The stunned crowds
started chanting "Adonai indeed is God!"!

20 So Ahab summoned everyone in Israel,
particularly the prophets, to Mount Carmel.

21 Elijah challenged the people: "How long
are you going to sit on the fence? If God is
the real God, follow him; if it's Baal, follow him.
Make up your minds!"

Nobody said a word; nobody made a move.

22-24 Then Elijah said, "I'm the only prophet of
God left in Israel; and there are 450 prophets of
Baal. Let the Baal prophets bring up two oxen; let
them pick one, butcher it, and lay it out on an altar
on firewood—but don't ignite it. I'll take the other
ox, cut it up, and lay it on the wood. But neither
will I light the fire. Then you pray to your gods
and I'll pray to God. The god who answers with
fire will prove to be, in fact, God."

All the people agreed: "A good plan—do it!"

25 Elijah told the Baal prophets, "Choose your ox
and prepare it. You go first, you're the majority.
Then pray to your god, but don't light the fire."

26 So they took the ox he had given them,
prepared it for the altar, then prayed to Baal.
They prayed all morning long, "O Baal, answer
us!" But nothing happened—not so much as a
whisper of breeze. Desperate, they jumped and
stomped on the altar they had made.

27-28 By noon, Elijah had started making fun of
them, taunting, "Call a little louder—he is a god,
after all. Maybe he's off meditating somewhere
or other, or maybe he's gotten involved in a
project, or maybe he's on vacation. You don't
suppose he's overslept, do you, and needs to
be waked up?" They prayed louder and louder,
cutting themselves with swords and knives—a
ritual common to them—until they were covered
with blood.

29 This went on until well past noon. They used
every religious trick and strategy they knew to
make something happen on the altar, but nothing
happened—not so much as a whisper, not a
flicker of response.

30-35 Then Elijah told the people, "Enough of
that—it's my turn. Gather around." And they
gathered. He then put the altar back together for
by now it was in ruins. Elijah took twelve stones,
one for each of the tribes of Jacob, the same
Jacob to whom God had said, "From now on your
name is Israel." He built the stones into the altar in
honor of God. Then Elijah dug a fairly wide trench
around the altar. He laid firewood on the altar, cut
up the ox, put it on the wood, and said, "Fill four
buckets with water and drench both the ox and
the firewood." Then he said, "Do it again," and
they did it. Then he said, "Do it a third time," and
they did it a third time. The altar was drenched
and the trench was filled with water.

36-37 When it was time for the sacrifice to be
offered, Elijah the prophet came up and prayed,
"O God, God of Abraham, Isaac, and Israel, make
it known right now that you are God in Israel, that
I am your servant, and that I'm doing what I'm
doing under your orders. Answer me, God; O
answer me and reveal to this people that you
are God, the true God, and that you are giving
these people another chance at repentance." 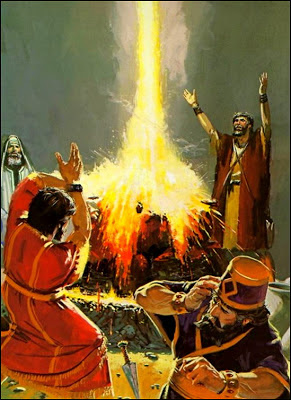 38 Immediately the fire of God fell and burned
up the offering, the wood, the stones, the dirt,
and even the water in the trench.

Sing God a brand new song!
Earth and everyone in it, sing!
Sing to God—worship God!
2-3 Shout the news of his victory from sea to
sea,
Take the news of his glory to the lost,
News of his wonders to one and all!
4-5 For God is great, and worth a thousand
Hallelujahs.
His terrible beauty makes the gods look
cheap;
Pagan gods are mere tatters and rags.
5-6 God made the heavens—
Royal splendor radiates from him,
A powerful beauty sets him apart.
7 Bravo, God, Bravo!
Everyone join in the great shout: Encore!
In awe before the beauty, in awe before the
might.
8-9 Bring gifts and celebrate,
Bow before the beauty of God,
Then to your knees—everyone worship!

10 Get out the message—God Rules!
He put the world on a firm foundation;
He treats everyone fair and square.

11 Let's hear it from Sky,
With Earth joining in,
And a huge round of applause from Sea.

12 Let Wilderness turn cartwheels,
Animals, come dance,
Put every tree of the forest in the choir— 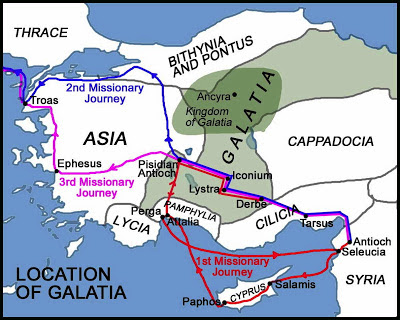 Paul marvels at how quickly the Christians
of Galatia were turning to "another gospel"
and he reminds them the gospel he shared
with them was truly from Jesus, and not
based on the opinion of any human authority. 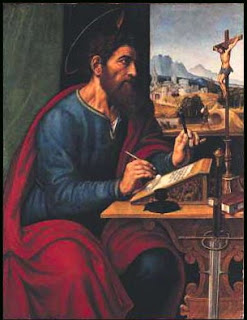 1-5  I, Paul, and my companions in faith here,
send greetings to the Galatian churches. My
authority for writing to you does not come
from any popular vote of the people, nor does
it come through the appointment of some
human higher-up. It comes directly from Jesus
the Messiah and God the Father, who raised
him from the dead. I'm God-commissioned. So
I greet you with the great words, grace and
peace! We know the meaning of those words
because Jesus Christ rescued us from this evil
world we're in by offering himself as a sacrifice
for our sins. God's plan is that we all experience
that rescue. Glory to God forever! Oh, yes!

6-9  I can't believe your fickleness—how easily
you have turned traitor to him who called you
by the grace of Christ by embracing a variant
message! It is not a minor variation, you know;
it is completely other, an alien message, a
no-message, a lie about God. Those who are
provoking this agitation among you are turning
the Message of Christ on its head. Let me be
blunt: If one of us—even if an angel from
heaven!—were to preach something other than
what we preached originally, let him be cursed.
I said it once; I'll say it again: If anyone,
regardless of reputation or credentials,
preaches something other than what you
received originally, let him be cursed.

10-12  Do you think I speak this strongly in order
to manipulate crowds? Or curry favor with God?
Or get popular applause? If my goal was
popularity, I wouldn't bother being Christ's slave.
Know this—I am most emphatic here, friends—
this great Message I delivered to you is not mere
human optimism. I didn't receive it through the
traditions, and I wasn't taught it in some school.
I got it straight from God, received the Message
directly from Jesus Christ.
—————————————————————
LUKE 7:1-10
THE MESSAGE (MSG)
Jesus heals the servant of a centurion "at a
distance" and marvels at the centurion's
faith. The first disciples already showed
substantial faith, just by being disciples, that
is, by agreeing to follow him and learn from
him wherever he went.   If Jesus could be
surprised at the centurion, they need to be
ready and perhaps even expectant to be
surprised ourselves by ways we see faith
and the kingdom of God at work in the lives
of people. Expect surprise!
A PLACE OF HOLY MYSTERY
1-5 When he finished speaking to the people, he
entered Capernaum. A Roman captain there had
a servant who was on his deathbed. He prized
him highly and didn't want to lose him. When he
heard Jesus was back, he sent leaders from the
Jewish community asking him to come and heal
his servant. They came to Jesus and urged him
to do it, saying, "He deserves this. He loves our
people. He even built our meeting place."
6-8 Jesus went with them. When he was still
quite far from the house, the captain sent friends
to tell him, "Master, you don't have to go to all
this trouble. I'm not that good a person, you know.
I'd be embarrassed for you to come to my house,
even embarrassed to come to you in person. Just
give the order and my servant will get well. I'm a
man under orders; I also give orders. I tell one
soldier, 'Go,' and he goes; another, 'Come,' and
he comes; my slave, 'Do this,' and he does it."
9-10 Taken aback, Jesus addressed the
accompanying crowd: "I've yet to come across
this kind of simple trust anywhere in Israel, the
very people who are supposed to know about
God and how he works." When the messengers
got back home, they found the servant up and
well.
—————————————————————
Happy Anniversary,
Dean and Melodee Carstens!
^  ^  ^  ^  ^  ^  ^  ^  ^  ^  ^  ^  ^  ^  ^  ^  ^  ^  ^
• REV. ED KAIL’S RETIREMENT PARTY •
FROM 3:00 – 5:00 P. M. at
CARSON COMMUNITY CENTER,
316 S. COMMERCIAL ST.,
CARSON, IOWA
• 1924 - All American Indians were granted U.S.
citizenship by the United States Congress.
• 1966 - Surveyor 1, the U.S. space probe, landed
on the moon and started sending photographs
back to Earth of the Moon's surface. It was the
first soft landing on the Moon.
• 1998 - Voters in California passed Proposition
227. The act abolished the state's 30-year-old
bilingual education program by requiring that
all children be taught in English.
≈≈≈≈≈≈≈≈≈≈≈≈≈≈≈≈≈≈≈≈≈≈≈≈≈≈≈≈≈≈≈≈≈≈≈≈≈≈≈
MONDAY, JUNE 3RD —
Office is closed today.
• 1539 - Hernando De Soto claimed Florida for
Spain.
• 1621 - The Dutch West India Company rec'd
a charter for New Netherlands (now known as
New York).
• 1800 - John Adams moved to Washington,
DC. He was the first President to live in what
would later become the capital of the United
States.
• 1959 - The first class graduated from the Air
Force Academy in Colorado Springs, Colorado.
≈≈≈≈≈≈≈≈≈≈≈≈≈≈≈≈≈≈≈≈≈≈≈≈≈≈≈≈≈≈≈≈≈≈≈≈≈≈≈
TUESDAY, JUNE 4TH —
• 1792 - Captain George Vancouver claimed
Puget Sound for Britain.
• 1812 - The Louisiana Territory had its name
changed to the Missouri Territory.
• 1919 - The U.S. Senate passed the Women's
Suffrage bill.
• 1942 - The Battle of Midway began. It was the
first major victory for America over Japan
during World War II. The battle ended on June
6 and ended Japanese expansion in the
Pacific.
• 1989 - In Beijing, Chinese army troops
stormed Tiananmen Square to crush the pro-
democracy movement. It is believed that
hundreds, possibly thousands, of
demonstrators were killed.
≈≈≈≈≈≈≈≈≈≈≈≈≈≈≈≈≈≈≈≈≈≈≈≈≈≈≈≈≈≈≈≈≈≈≈≈≈≈≈
WEDNESDAY, JUNE 5TH —
• ADAIR U.M.W. MEETING AT HAPPY CHEF
AT 8:30 A.M. 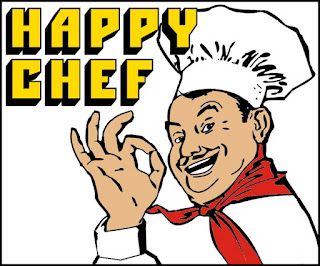 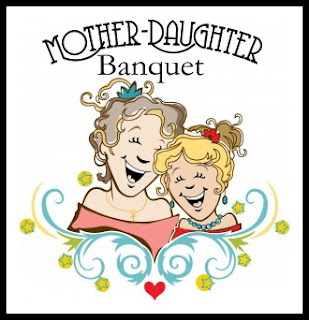 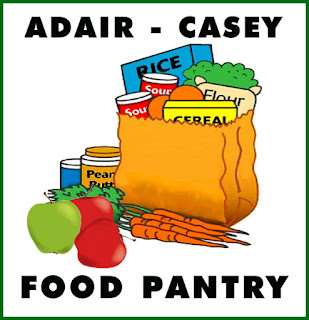