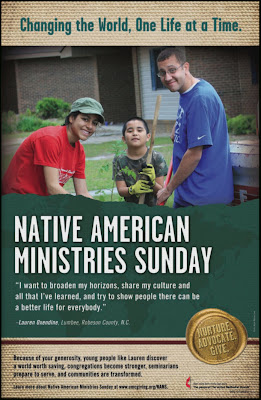 The purpose of Native American Ministries
Sunday offering is to provide education and
information about American Indian tradition
and culture.
— THE GIVE AWAY —
This is one of the oldest and most honored
traditions among American Indians. Historically,
Native Americans did not hold the same value
on personal ownership or value of personal
property. Instead, the focus was on what
benefited the tribe. American Indians traditionally
gave to others what was needed. At times, items
of value were set aside for the purpose of the
give away. Once given, all connections to the
item were broken. To give away brought honor to
one’s family, clan or tribe, but it was never
spoken of again.

The Native American Offering of Hospitality —
Welcome family! Welcome relations! Welcome all!
The house of the Creator is our gathering place
today.

God, who walked with our ancestors, who walks
among us now, and who will walk with our
children's children for generations to come,
we give you thanks for your presence. 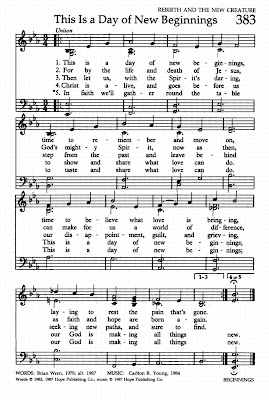 ≈≈≈≈≈≈≈≈≈≈≈≈≈≈≈≈≈≈≈≈≈≈≈≈≈≈≈≈≈≈≈≈≈≈≈≈≈≈≈
This week, the Scriptures build around a
common theme of
"Christ Calls You BEYOND Yourself."
≈≈≈≈≈≈≈≈≈≈≈≈≈≈≈≈≈≈≈≈≈≈≈≈≈≈≈≈≈≈≈≈≈≈≈≈≈≈≈
SCRIPTURE READINGS
ACTS 9:1-20
It's the old familiar story of Saul's encounter with the risen Jesus as Saul was traveling to Damascus to persecute Christians there.  Jesus confronts Saul and executes his blindness to force him to recognize his self-inflicted spiritual blindness and opens a path for him to undergo inner healing.
THE BLINDING OF SAUL
1-2 All this time Saul was breathing down the
necks of the Master's disciples, out for the kill.
He went to the Chief Priest and got arrest
warrants to take to the meeting places in
Damascus so that if he found anyone there
belonging to the Way, whether men or women,
he could arrest them and bring them to
Jerusalem.

3-4 He set off. When he got to the outskirts of
Damascus, he was suddenly dazed by a blinding
flash of light. As he fell to the ground, he heard a
voice: "Saul, Saul, why are you out to get me?" 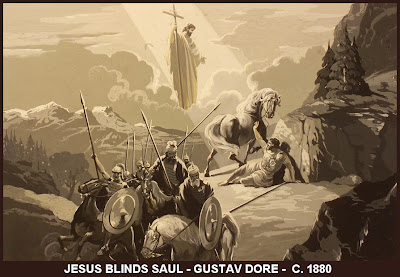 "I am Jesus, the One you're hunting down. I
want you to get up and enter the city. In the city
you'll be told what to do next."

7-9 His companions stood there dumbstruck—
they could hear the sound, but couldn't see
anyone—while Saul, picking himself up off the
ground, found himself stone-blind. They had to
take him by the hand and lead him into
Damascus. He continued blind for three days.
He ate nothing, drank nothing.

10 There was a disciple in Damascus by the
name of Ananias. The Master spoke to him in a
vision: "Ananias."

"Yes, Master?" he answered.
11-12" Get up and go over to Straight Avenue.
Ask at the house of Judas for a man from
Tarsus. His name is Saul. He's there praying. He
has just had a dream in which he saw a man
named Ananias enter the house and lay hands
on him so he could see again."

13-14 Ananias protested, "Master, you can't be
serious. Everybody's talking about this man and
the terrible things he's been doing, his reign of
terror against your people in Jerusalem! And
now he's shown up here with papers from the
Chief Priest that give him license to do the same
to us."

15-16 But the Master said, "Don't argue. Go!  I
have picked him as my personal representative
to non-Jews and kings and Jews. And now I'm
about to show him what he's in for—the hard
suffering that goes with this job." 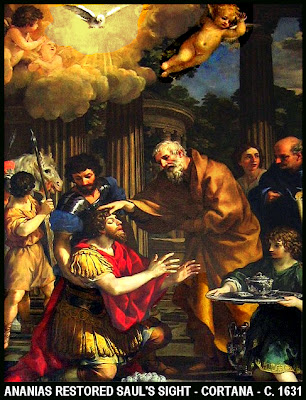 17-19 So Ananias went and found the house,
placed his hands on blind Saul, and said,
"Brother Saul, the Master sent me, the same
Jesus you saw on your way here. He sent me so
you could see again and be filled with the Holy
Spirit." No sooner were the words out of his
mouth than something like scales fell from
Saul's eyes—he could see again! He got to his
feet, was baptized, and sat down with them to
a hearty meal.
PLOTS AGAINST SAUL
19-21 Saul spent a few days getting acquainted
with the Damascus disciples, but then went
right to work, wasting no time, preaching in the
meeting places that this Jesus was the Son of
God. They were caught off guard by this and, not
at all sure they could trust him, they kept saying,
"Isn't this the man who wreaked havoc in
Jerusalem among the believers?  And didn't he
come here to do the same thing—arrest us and
drag us off to jail in Jerusalem for sentencing by
the high priests?" 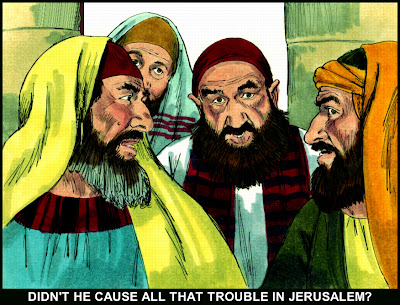 2-3 God, my God, I yelled for help
and you put me together.
God, you pulled me out of the grave,
gave me another chance at life
when I was down-and-out.

4-5 All you saints! Sing your hearts out to God!
Thank him to his face!
He gets angry once in a while, but across
a lifetime there is only love.
The nights of crying your eyes out
give way to days of laughter.

6-7 When things were going great
I crowed, "I've got it made.
I'm God's favorite.
He made me king of the mountain."
Then you looked the other way
and I fell to pieces.

8-10 I called out to you, God;
I laid my case before you:
"Can you sell me for a profit when I'm dead?
auction me off at a cemetery yard sale?
When I'm 'dust to dust' my songs
and stories of you won't sell.
So listen! and be kind!
Help me out of this!"

11-12 You did it: you changed wild lament
into whirling dance; 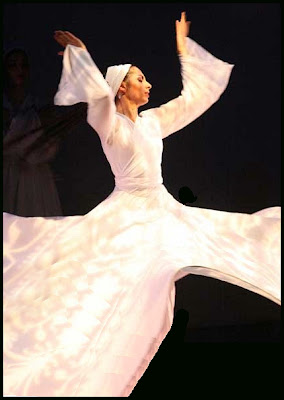 You ripped off my black mourning band
and decked me with wildflowers.
I'm about to burst with song; 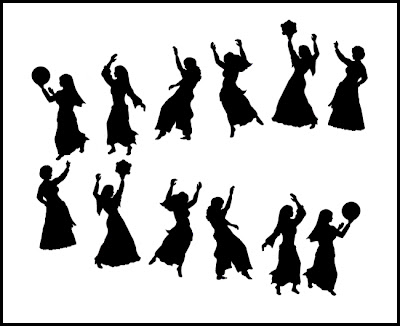 I can't keep quiet about you.
God, my God,
I can't thank you enough.
————————————————————
REVELATION 5:11-14
In praise and worship, we join our voices withthe heavenly throng to bless God with all we have and are.
11-14 I looked again. I heard a company of
Angels around the Throne, the Animals, and the
Elders—ten thousand times ten thousand their
number, thousand after thousand after thousand
in full song:
The slain Lamb is worthy!
Take the power, the wealth, the wisdom, the
strength!
Take the honor, the glory, the blessing!
Then I heard every creature in Heaven and earth,
in underworld and sea, join in, all voices in all
places, singing:

To the One on the Throne! To the Lamb!
The blessing, the honor, the glory, the strength,
For age after age after age.
The Four Animals called out, "Oh, Yes!" The
Elders fell to their knees and worshiped.
————————————————————
JOHN 21:1-19
Jesus challenges disciples to cast their nets on the "wrong" side of the boat, then challenges Peter's love for him and calls him to "feed my sheep."
FISHING
1-3 After this, Jesus appeared again to the
disciples, this time at the Tiberias Sea (the Sea
of Galilee). This is how he did it: Simon Peter,
Thomas (nicknamed "Twin"), Nathanael from
Cana in Galilee, the brothers Zebedee, and two
other disciples were together. Simon Peter
announced, "I'm going fishing."

3-4 The rest of them replied, "We're going with
you." They went out and got in the boat. They
caught nothing that night. When the sun came
up, Jesus was on the beach, but they didn't
recognize him. 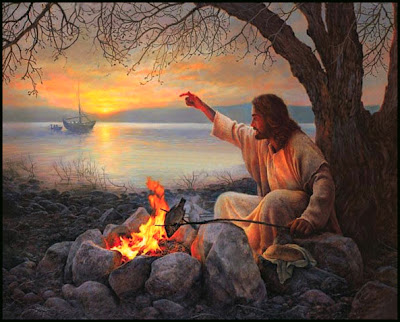 5 Jesus spoke to them: "Good morning! Did you
catch anything for breakfast?"

6 He said, "Throw the net off the right side of the
boat and see what happens."

They did what he said. All of a sudden there
were so many fish in it, they weren't strong
enough to pull it in. 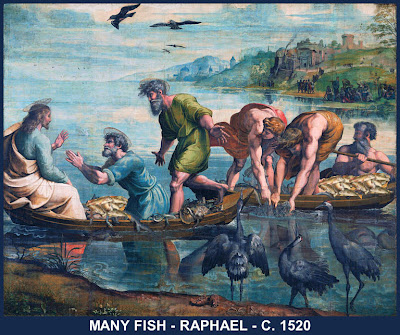 7-9 Then the disciple Jesus loved said to Peter,
"It's the Master!"

When Simon Peter realized that it was the
Master, he threw on some clothes, for he was
stripped for work, and dove into the sea. The
other disciples came in by boat for they weren't
far from land, a hundred yards or so, pulling
along the net full of fish. When they got out of
the boat, they saw a fire laid, with fish and bread
cooking on it.

10-11 Jesus said, "Bring some of the fish you've
just caught." Simon Peter joined them and
pulled the net to shore—153 big fish! And even
with all those fish, the net didn't rip.

12 Jesus said, "Breakfast is ready." Not one of
the disciples dared ask, "Who are you?" They
knew it was the Master.

13-14 Jesus then took the bread and gave it to
them. He did the same with the fish. This was
now the third time Jesus had shown himself
alive to the disciples since being raised from the
dead.
DO YOU LOVE ME?
15 After breakfast, Jesus said to Simon Peter,
"Simon, son of John, do you love me more than
these?"

Peter was upset that he asked for the third
time, "Do you love me?" so he answered,
"Master, you know everything there is to know.
You've got to know that I love you."

Jesus said, "Feed my sheep. I'm telling you the
very truth now: When you were young you
dressed yourself and went wherever you wished,
but when you get old you'll have to stretch out
your hands while someone else dresses you and
takes you where you don't want to go." He said
this to hint at the kind of death by which Peter
would glorify God. And then he commanded,
"Follow me."
≈≈≈≈≈≈≈≈≈≈≈≈≈≈≈≈≈≈≈≈≈≈≈≈≈≈≈≈≈≈≈≈≈≈≈≈≈≈≈
MONDAY, APRIL 15TH —
The office is closed today. 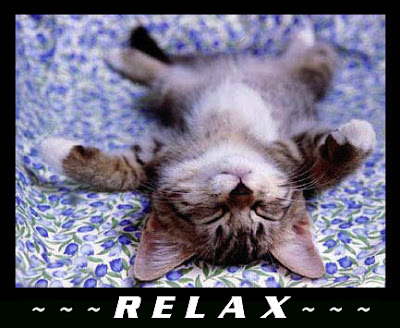 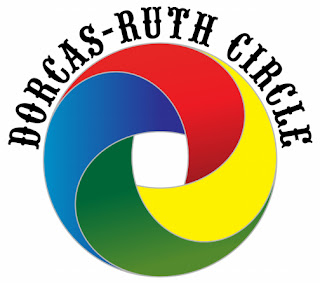 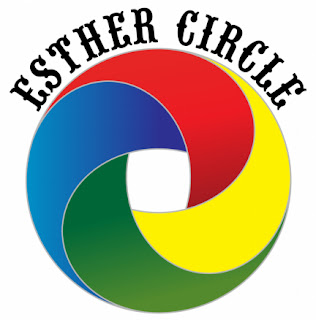 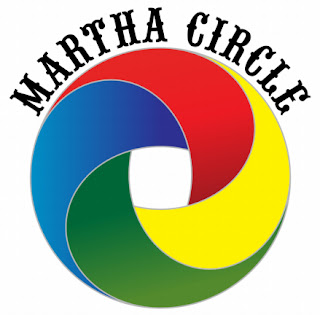 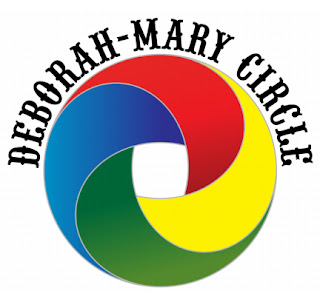 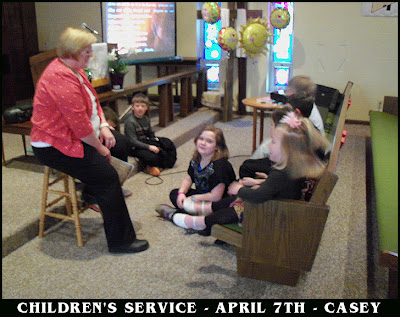 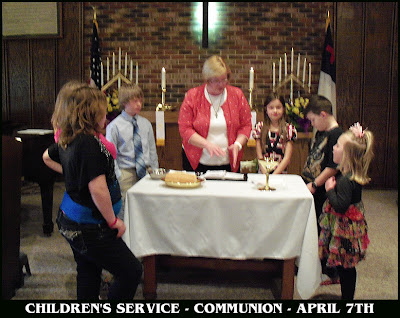 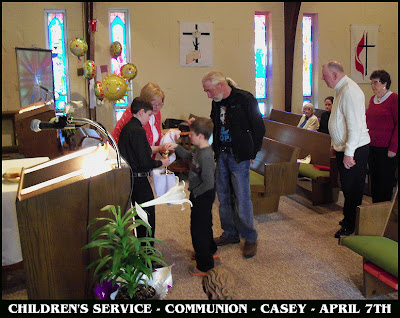 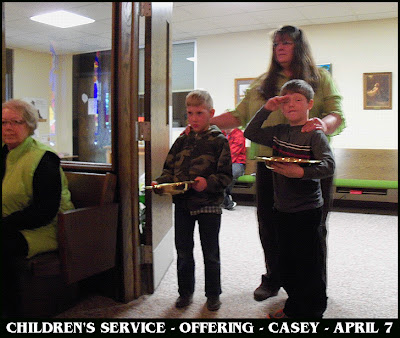 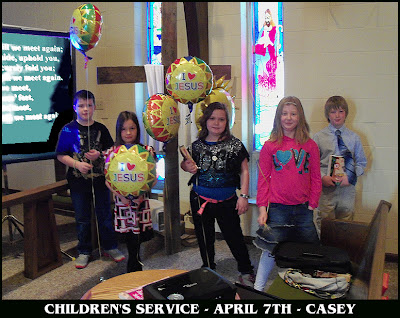 Title:  “YES LORD, I HAVE SINNED, BUT I HAVE
SEVERAL EXCELLENT EXCUSES”
————————————————————
• • WORLD MALARIA DAY: APRIL 25 • •
To commemorate World Malaria Day (25 April),
organizations in an innovative public-private
enterprize announce a malaria treatment access
initiative, "SMS for Life", across the United
Republic of Tanzania. This follows a pilot
project where mapping technology was used
to track the levels of anti-malarial drugs to
manage supplies of essential treatments.
• Malaria kills a child every 45 seconds and
limited access to treatment in remote areas
remains a major hurdle in the fight against
this deadly disease.
• Malaria kills about 800,000 people every
year, the vast majority of whom live in sub-
Saharan Africa where the disease is still a
leading cause of death for children under five.
Although malaria is preventable and treatable,
life-saving medicines often do not reach the
patients who desperately need them.
[[[[[[[[[[[[[[[[[[[[[[[[[[[[[[[[[[[[[[[[[[[[[[[[[[[[[[[[[[[[[[[[[[[[[[[[[