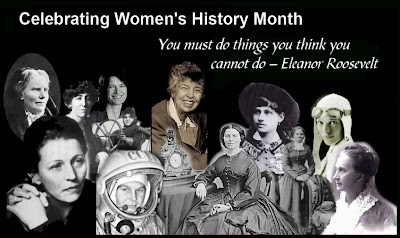 From the Smithsonian Institute:

In the spring of 1913, one hundred years ago,
women in six states had the right to vote in all
elections:  Wyoming, Colorado, Utah, Idaho,
Washington, California. (Western states).
Despite these successes, the momentum of the
65-year-old suffrage movement was slowing
down.  It was like a car running on fumes. 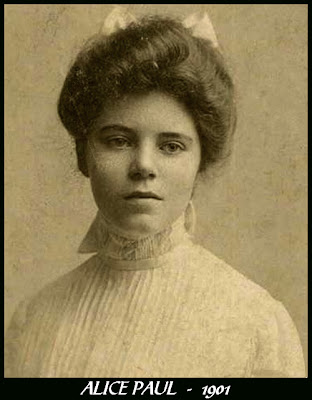 Alice Paul recently returned to the States from
England, where she cut her teeth as a suffragist,
the 28-year-old New Jersey native pitched an
idea to the National American Woman Suffrage
Association. She would organize a suffrage
parade in Washington, D.C.
The Woman Suffrage Parade of 1913 marched
down Pennsylvania Avenue in Washington, D.C.
on March 3, 1913. The march was scheduled on
the day before President Woodrow Wilson's
inauguration to "march in a spirit of protest
against the present political organization of
society, from which women were excluded", as
the official program stated. 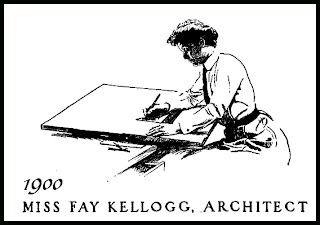 FAY KELLOGG - ARCHITECT
Fay Kellogg (1871–1918) was an American
architect and suffragette who helped to open the
field of architecture to women who followed. She
was described in her own time as “the foremost
woman architect in the United States”, and
known for staying on the job site “until the last
brick is laid and the last nail is driven.”

Fay was born in Pennsylvania and studied at
Columbian University (now called George
Washington University) in Washington D.C. At
first she intended to become a doctor, but her
father convinced her to study drawing instead
and offered to pay all her tuition if she switched.

She attended Pratt Institute in Brooklyn. She
worked for a New York architectural firm for a
while, but then decided to continue her in Paris
in order to further her career. At the time, women
were not admitted to the Ecole des Beaux Arts,
where Fay wanted to go. During her stay in Paris,
she brought attention to herself with her fight for
the admission of women to the eminent academy.
She never attended the school herself, but she
played a large role in opening up the Ecole des
Beaux Arts to women and paved the way for the
first female graduate in 1902, Julia Morgan.

Fay returned to the US in 1900 and was promptly
employed by an established architect in New York
City, John R. Thomas. While working for him she
designed the large double staircase in the atrium
of the Hall of Records, and she came up with the
idea of placing statues of earlier governors on
the building.

Fay started her own architectural firm in 1903.
She started off right away with a commission to
renovate and construct seven buildings for the
American News Company in Manhattan, and
they soon placed her in charge of all their work in
New York City. She directly supervised all work
within 200 miles of the city, and drew plans for
other projects that were further away.

Fay designed or was involved in designing
hundreds of buildings and cottages, suburban
railway stations, and even a skyscraper in San
Francisco. She helped to design the Woman’s
Memorial Hospital in Brooklyn, which was
founded in 1881 by women physicians who had
been refused positions in existing hospitals. 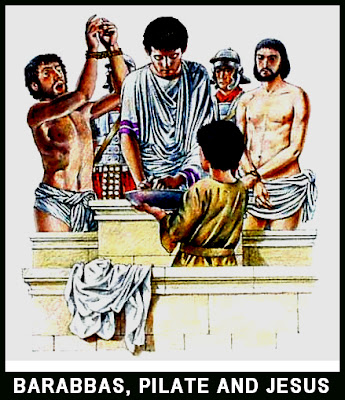 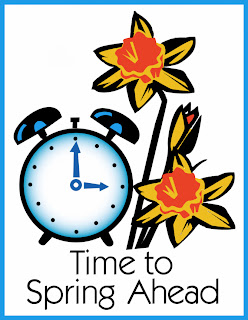 ONE GREAT HOUR OF SHARING  OFFERING 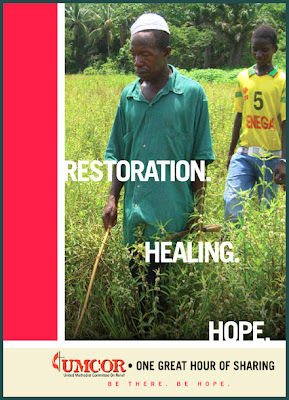 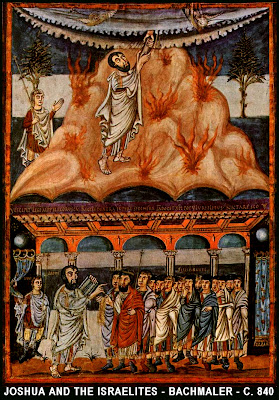 9 God said to Joshua, "Today I have rolled
away the reproach of Egypt." That's why the
place is called The Gilgal. It's still called that.

10 The People of Israel continued to camp at
The Gilgal. They celebrated the Passover on
the evening of the fourteenth day of the month
on the plains of Jericho.

11-12 Right away, the day after the Passover,
they started eating the produce of that country,
unraised bread and roasted grain. And then no
more manna; the manna stopped. As soon as
they started eating food grown in the land, there
was no more manna for the People of Israel. That
year they ate from the crops of Canaan.
———————————————————————
PSALM 32 (UMH 766)
THE MESSAGE (MSG)
A confession of sin, disgrace, and God's prodigal mercy cleanses and heals us all.
A PSALM OF DAVID
1 Count yourself lucky, how happy you must be
— you get a fresh start,
your slate's wiped clean.

2 Count yourself lucky—
God holds nothing against you
and you're holding nothing back from him.

3 When I kept it all inside,
my bones turned to powder,
my words became daylong groans.

4 The pressure never let up;
all the juices of my life dried up.

Suddenly the pressure was gone—
my guilt dissolved,
my sin disappeared.

6 These things add up. Every one of us  needs to
pray;
when all hell breaks loose and the dam bursts
we'll be on high ground, untouched.

7 God's my island hideaway,
keeps danger far from the shore,
throws garlands of hosannas around my neck.

8 Let me give you some good advice;
I'm looking you in the eye
and giving it to you straight:

9 "Don't be ornery like a horse or mule
that needs bit and bridle
to stay on track."

10 God-defiers are always in trouble;
God-affirmers find themselves loved
every time they turn around.

11 Celebrate God.
Sing together—everyone!
All you honest hearts, raise the roof!
———————————————————————
2 CORINTHIANS 5:16-21
THE MESSAGE (MSG)
In Christ, God was reconciling the world; not counting our trespasses. He makes those in Christ "ministers of reconciliation."
16-20 Because of this decision we don't evaluate
people by what they have or how they look. We
looked at the Messiah that way once and got it
all wrong, as you know. We certainly don't look
at him that way anymore. Now we look inside,
and what we see is that anyone united with the
Messiah gets a fresh start, is created new. The old
life is gone; a new life burgeons! Look at it! All this
comes from the God who settled the relationship
between us and him, and then called us to settle
our relationships with each other. God put the
world square with himself through the Messiah,
giving the world a fresh start by offering
forgiveness of sins. God has given us the task of
telling everyone what he is doing. We're Christ's
representatives. God uses us to persuade men
and women to drop their differences and enter
into God's work of making things right between
them. We're speaking for Christ himself now:
Become friends with God; he's already a friend
with you.

21 How? you ask. In Christ. God put the wrong on
him who never did anything wrong, so we could
be put right with God.
———————————————————————
LUKE 15:1-32
THE MESSAGE (MSG)
The story of a prodigal Father, the wandering and repentance of a younger son and a resentful firstborn brother.
THE STORY OF THE LOST SHEEP
1-3 By this time a lot of men and women of
doubtful reputation were hanging around Jesus,
listening intently. The Pharisees and religion
scholars were not pleased, not at all pleased.
They growled, "He takes in sinners and eats
meals with them, treating them like old
friends." Their grumbling triggered this story. 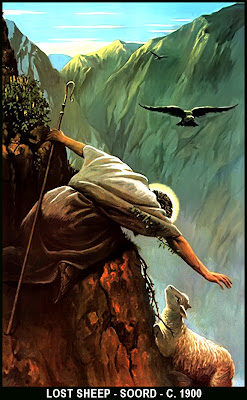 4-7 "Suppose one of you had a hundred sheep
and lost one. Wouldn't you leave the ninety-
nine in the wilderness and go after the lost
one until you found it? When found, you can
be sure you would put it across your shoulders,
rejoicing, and when you got home call in your
friends and neighbors, saying, 'Celebrate with
me! I've found my lost sheep!' Count on it—
there's more joy in heaven over one sinner's
rescued life than over ninety-nine good people
in no need of rescue.
THE STORY OF THE LOST COIN
8-10" Or imagine a woman who has ten coins and
loses one. Won't she light a lamp and scour the
house, looking in every nook and cranny until she
finds it? 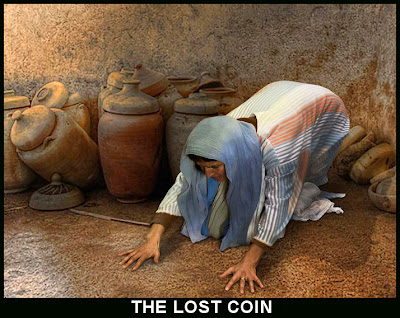 And when she finds it you can be sure she'll call
her friends and neighbors: 'Celebrate with me! I
found my lost coin!' Count on it—that's the kind of
party God's angels throw every time one lost soul
turns to God."
THE STORY OF THE LOST SON
11-12Then he said, "There was once a man who
had two sons. The younger said to his father,
'Father, I want right now what's coming to me.'

12-16 "So the father divided the property
between them. It wasn't long before the younger
son packed his bags and left for a distant
country. There, undisciplined and dissipated, he
wasted everything he had. After he had gone
through all his money, there was a bad famine
all through that country and he began to hurt. He
signed on with a citizen there who assigned him
to his fields to slop the pigs. He was so hungry
he would have eaten the corncobs in the pig slop,
but no one would give him any.

17-20" That brought him to his senses. He said,
'All those farmhands working for my father sit
down to three meals a day, and here I am
starving to death. I'm going back to my father.
I'll say to him, Father, I've sinned against God,
I've sinned before you; I don't deserve to be
called your son. Take me on as a hired hand.' He
got right up and went home to his father.

20-21 "When he was still a long way off, his
father saw him. His heart pounding, he ran out,
embraced him, and kissed him. The son started
his speech: 'Father, I've sinned against God,
I've sinned before you; I don't deserve to be
called your son ever again.' 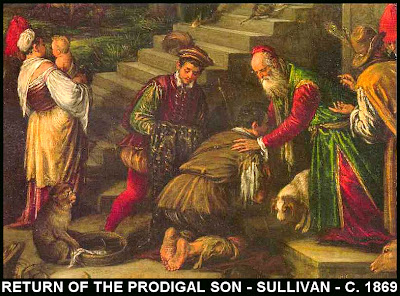 22-24" But the father wasn't listening. He was
calling to the servants, 'Quick. Bring a clean
set of clothes and dress him. Put the family ring
on his finger and sandals on his feet. Then get a
grain-fed heifer and roast it. We're going to feast!
We're going to have a wonderful time! My son is
here—given up for dead and now live! Given up
for lost and now found!' And they began to have
a wonderful time.

25-27" All this time his older son was out in the
field. When the day's work was done he came in.
As he approached the house, he heard the
music and dancing. Calling over one of the
houseboys, he asked what was going on. He
told him, 'Your brother came home. Your father
has ordered a feast—barbecued beef!—because
he has him home safe and sound.'

28-30 "The older brother stalked off in an angry
sulk and refused to join in. His father came out
and tried to talk to him, but he wouldn't listen.
The son said, 'Look how many years I've stayed
here serving you, never giving you one moment
of grief, but have you ever thrown a party for me
and my friends? Then this son of yours who has
thrown away your money on whores shows up
and you go all out with a feast!' 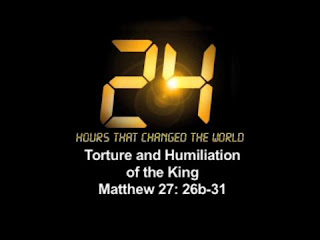 MOBILE FOOD PANTRY WILL SET UP IN
CASEY COMMUNITY BUILDING AT 10 A.M. 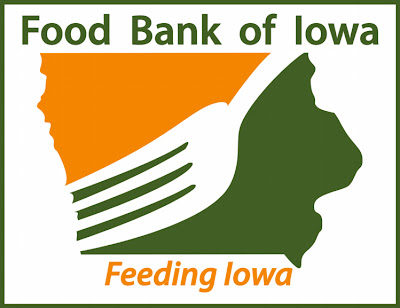 BRING YOUR OWN BOXES AND BAGS TO
CARRY YOUR FOOD HOME IN.
THE FOOD PANTRY WILL BE AVAILABLE
UNTIL 12 NOON.
PLEASE PASS THE WORD ALONG TO ANY
LOCAL RESIDENTS WHO MIGHT BENEFIT FROM
THIS SERVICE.
IF YOU HAVE ANY QUESTIONS, PLEASE CALL
THE FOOD BANK OF IOWA:   515-564-0330 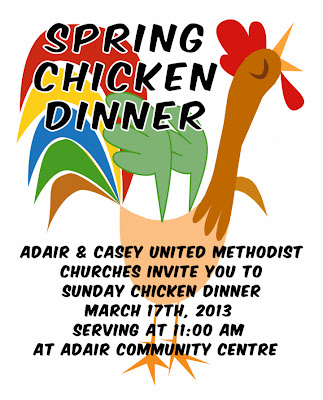 Thank you for your contributions to our
church life this week.  Whatever your
skills might be, we will be very grateful
for them.