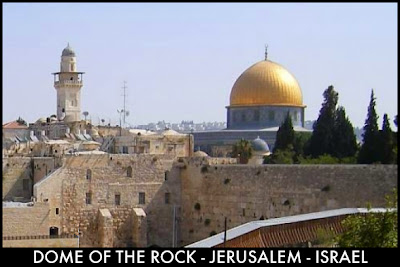 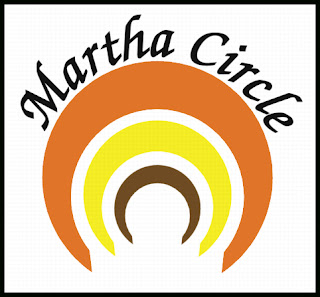 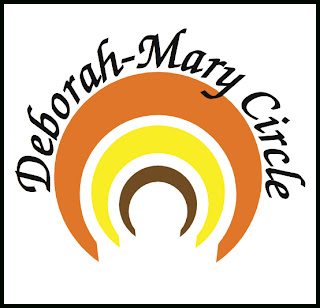 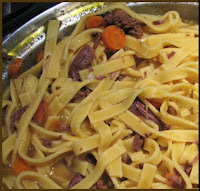 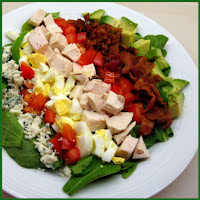 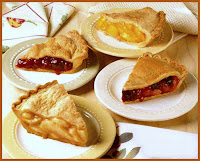 • THEN THE AUCTION BEGINS AT 1:00 P.M.
———————————————————————
SCRIPTURE READINGS THIS WEEK:
RUTH 3:1-5; 4:13-17
† New International Reader's Version (NIRV)
This reading reminds us how basic codes of
hospitality and family, built into Judean culture
from of old, also call for an end to the extreme
"us versus them" mentality of the day.
Naomi guides Ruth through the customs of
Hebrew culture to enable her legitimately to find
a husband, home, and children. In this way,
Ruth becomes the great grandmother of Israel's
future king, David.
RUTH GOES TO BOAZ AT
THE THRESHING FLOOR
1 One day Ruth's mother-in-law Naomi spoke
to her. She said, "My daughter, shouldn't I try
to find a secure place for you? Shouldn't you
have peace and rest? Shouldn't I find a home
where things will go well with you?
2 You have been with the female servants of
Boaz. He's a relative of ours. Tonight he'll be
separating the straw from his barley on the
threshing floor. 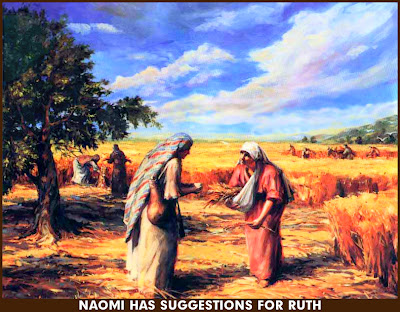 3 "So wash yourself. Put on some perfume.
And put on your best clothes. Then go down
to the threshing floor. But don't let Boaz
know you are there. Wait until he has finished
eating and drinking.
4 Notice where he lies down. Then go over
and uncover his feet. Lie down there. He'll
tell you what to do."
5 "I'll do everything you say," Ruth answered. 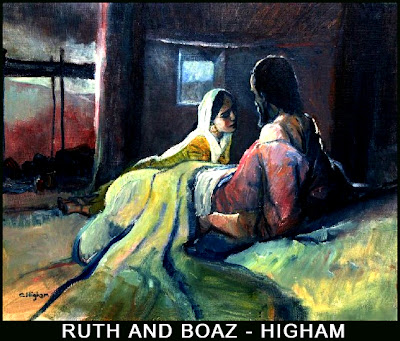 THE FAMILY LINE OF DAVID
13 So Boaz got married to Ruth. She became
his wife. Then he made love to her. The Lord
blessed her so that she became pregnant.
And she had a son. 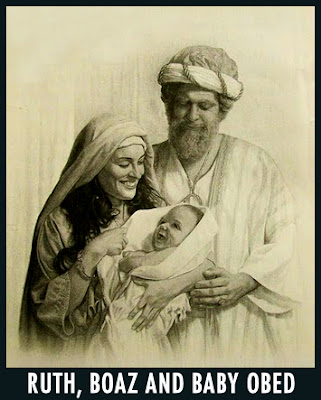 14 The women said to Naomi, "We praise the
Lord. Today he has provided a family protector for
you. May this child become famous all over Israel!
15 He will make your life new again. He'll take
care of you when you are old. He's the son of your
very own daughter-in-law. She loves you. She is
better to you than seven sons."
16 Then Naomi put the child on her lap and
took care of him.
17 The women who were living there said,
"Naomi has a son." They named him Obed.
He was the father of Jesse.
Jesse was the father of David.
———————————————————————
PSALM 127 or PSALM 42 (UMH 777)
† New International Reader's Version (NIRV)
Verses 1-2 focus on the emptiness of life without trust in God's presence and provision. Verses 3-5 tell of the blessing of having children. The theme that binds these two together is the term "house".
A song for those who go up to Jerusalem to
worship the Lord.   A psalm of Solomon.
1 If the Lord doesn't build a house,
the work of its builders is useless.
If the Lord doesn't watch over a city,
it's useless for those on guard duty to stand
watch over it.
2 It's useless for you to work from early morning
until late at night
just to get food to eat.
God provides for those he loves even while
they sleep.
3 Children are a gift from the Lord. 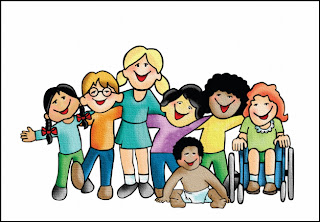 They are a reward from him.
4 Children who are born to people when they are
young are like arrows in the hands of a soldier.
5 Blessed are those
who have many children.
They won't be put to shame when they
go up against their enemies in court.
———————————————————————
OR  PSALM 42
"Hope in God; for I shall again praise him, my help and my God."
1 A deer longs for streams of water.
God, I long for you in the same way.
2 I am thirsty for God. I am thirsty for the living
God.
When can I go and meet with him?
3 My tears have been my food
day and night.
All day long people say to me,
"Where is your God?"
4 When I remember what has happened,
I tell God all of my troubles.
I remember how I used to walk along with
the crowd of worshipers.
I led them to the house of God.
We shouted with joy and gave thanks
as we went to the holy feast.
5 My spirit, why are you so sad?
Why are you upset deep down inside me?
Put your hope in God.
Once again I have reason to praise him.
He is my Savior and
6 my God.
My spirit is very sad deep down inside me.
So I will remember you here where the
Jordan River begins.
I will remember you here on the Hermon
mountains
and on Mount Mizar.
7 You have sent wave upon wave of trouble
over me.
It roars down on me like a waterfall.
All of your waves and breakers have rolled
over me.
8 During the day the Lord sends his love to me.
During the night I sing about him.
I say a prayer to the God who gives me life.
9 I say to God my Rock,
"Why have you forgotten me?
Why must I go around in sorrow?
Why am I beaten down by my enemies?"
10 My body suffers deadly pain
as my enemies make fun of me.
All day long they say to me,
"Where is your God?"
11 My spirit, why are you so sad?
Why are you so upset deep down inside me?
Put your hope in God.
Once again I will have reason to praise him.
He is my Savior and my God.
———————————————————————
HEBREWS 9:24-28
† New International Reader's Version (NIRV)
This week the contrast is between two different ritual actions of Yom Kippur itself: the atonement ritual proper and the scapegoat
ritual. Unlike the Aaronic priest who enters annually into the Holy of Holies with the blood of a bull and a goat to make ritual atonement, through the incarnation and his life of intercession and obedience even unto death, Jesus Christ entered into heaven itself, offering himself once for all to remove sin, not merely "cover" sin up.
24 Christ did not enter a sacred tent made by
people. That tent was only a copy of the true
one. He entered heaven itself. He did it to stand
in front of God for us. He is there right now.
25 The high priest enters the Most Holy Room
every year. He enters with blood that is not his
own. But Christ did not enter heaven to offer
himself again and again.
26 If he had, he would have had to suffer many
times since the world was created. But now he
has appeared once and for all time. He has
come at the end of the ages to do away with sin.
He has done that by offering himself.
27 People have to die once. After that, God will
judge them.
28 In the same way, Christ was offered up once.
He took away the sins of many people.  He will
also come a second time. At that time he will
not suffer for sin. Instead, he will come to bring
salvation to those who are waiting for him.
———————————————————————
MARK 12:38-44
† New International Reader's Version (NIRV)
The story of a world centered around temple and the powerful institutions that support it. Jesus is about to say, "It's all coming down." And this woman's generosity in the midst of her victimization by the temple system is a clear sign of it. It's a most fitting way to begin Advent, if you choose to do so today. It's also a most fitting way to expose the potential true cost of loving God with all we are, and loving neighbor as ourselves in a world as broken as ours is.
•  The story of the "widow's mite" comes about
immediately after warnings by Jesus about the
"home-devouring" practices of the scribes who
were expected to use the temple treasury funds
to support widows and orphans but used it to
support their own lavish lifestyles instead. That
is why the widow has only a penny to give, but
also why she gives it all — that perhaps others
might still be helped, even if meagerly, by what
she can offer. Her situation is also a sign of the
corruption of this present age and the need for
the arrival of the age to come.
38 As he taught, he said, "Watch out for the
teachers of the law. They like to walk around in
long robes. They like to be greeted in the
market places.
39 They love to have the most important seats
in the synagogues. They also love to have the
places of honor at dinners.
40 They take over the houses of widows. They
say long prayers to show off. God will punish
those men very much."
THE WIDOW'S OFFERING
41 Jesus sat down across from the place
where people put their temple offerings. He
watched the crowd putting their money into
the offering boxes. Many rich people threw
large amounts into them. 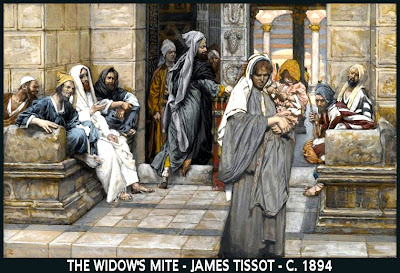 42 But a poor widow came and put in two very
small copper coins. They were worth much
less than a penny.
43 Jesus asked his disciples to come to him.
He said, "What I'm about to tell you is true.
That poor widow has put more into the offering
box than all the others.
44 They all gave a lot because they are rich.
But she gave even though she is poor. She put
in everything she had. She gave all she had to
live on."
———————————————————————
TODAY IS VETERANS DAY 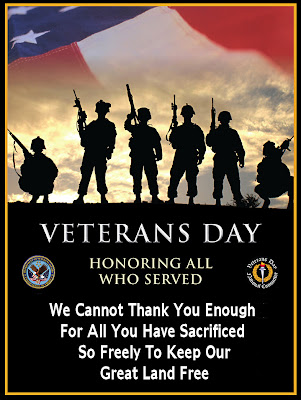 Our armed forces have been protecting us and the
rest of the world for a very long time - since the war
for independence.
• When I was young, I actually thought we had all
learned our lessons and there would be no more
wars.  War is so wasteful and terribly destructive.
It kills our young people and the young people of
all other countries involved. Why would we ever do
that again? We now have negotiations, dialogue,
mediation, arbitration?   I know . . . naive and very
immature.
We will be forever grateful for the men and women
who have protected our freedoms for the past 250
years . . . and for those who will protect them in
our future. Thank you ladies and gentlemen! 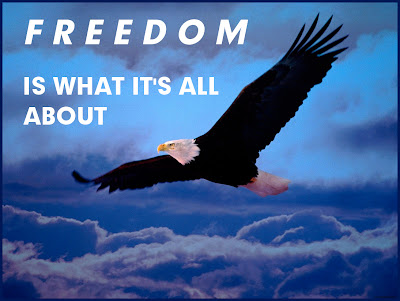