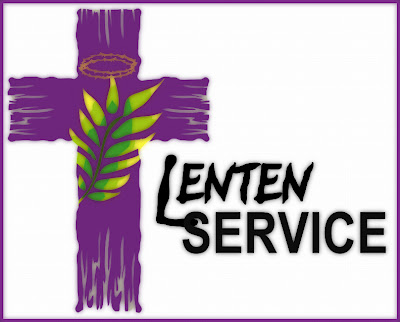 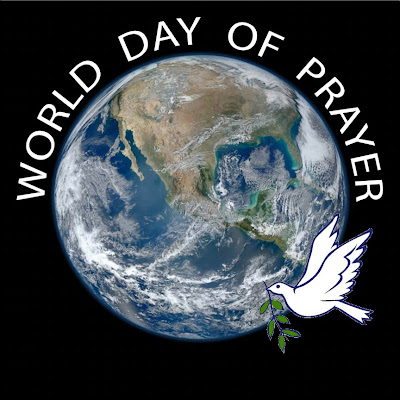 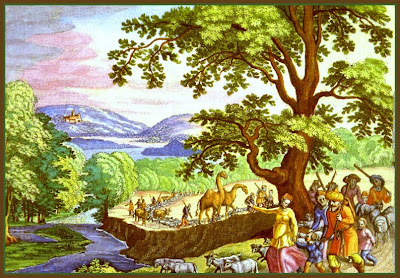 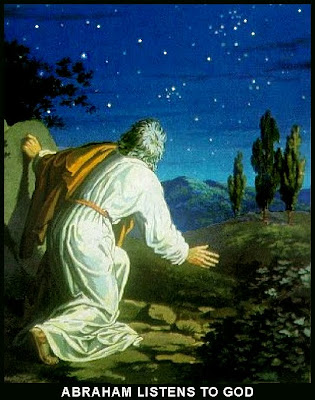 15 God continued speaking to Abraham, "And Sarai
your wife: Don't call her Sarai any longer;
call her Sarah.
16 I'll bless her - yes! I'll give you a son by her! Oh,
how I'll bless her! Nations will come from her; kings
of nations will come from her."
———————————————————————
PSALM 22:23-31 (UMH 752) (The Message)
The Lord's acts of deliverance for one people in
one age will lead to generations of praise to the
Lord worldwide.
23 Shout Hallelujah, you God-worshipers; give glory,
you sons of Jacob; adore him,
you daughters of Israel.
24 He has never let you down, never looked the
other way when you were being kicked around. He
has never wandered off to do his own thing; he has
been right there, listening.
25 Here in this great gathering for worship I have
discovered this praise-life. And I'll do what I
promised right here in front of the God-worshipers.
26 Down-and-outers sit at God's table and eat their
fill. Everyone on the hunt for God is here, praising
him. "Live it up, from head to toe. Don't ever quit!"
27 From the four corners of the earth people are
coming to their senses, are running back to God.
Long-lost families are falling on their faces
before him.
28 God has taken charge; from now on he has the
last word.
29 All the power-mongers are before him -
worshiping! All the poor and powerless, too -
worshiping! Along with those who never got it
together - worshiping!
30 Our children and their children will get in on this
As the word is passed along from parent to child.
31 Babies not yet conceived will hear the good news
- that God does what he says.
———————————————————————
ROMANS 4:13-25
(The Message)
Paul reminds the Jewish-Christian congregations
in Rome that the founding stories of Judaism
point to a God who graciously offers to include
people in covenant on the basis of faith, not
perfect obedience to the law. The heart of Paul's
argument in this week's reading is that God has
always operated toward humankind graciously
and on the basis of faith, starting with Abram.
13 That famous promise God gave Abraham - that
he and his children would possess the earth - was
not given because of something Abraham did or
would do. It was based on God's decision to put
everything together for him, which Abraham then
entered when he believed.
14 If those who get what God gives them only get
it by doing everything they are told to do and filling
out all the right forms properly signed, that
eliminates personal trust completely and turns the
promise into an ironclad contract! That's not a holy
promise; that's a business deal.
15 A contract drawn up by a hard-nosed lawyer and
with plenty of fine print only makes sure that you
will never be able to collect. But if there is no
contract in the first place, simply a promise - and
God's promise at that - you can't break it.
16 This is why the fulfillment of God's promise
depends entirely on trusting God and his way,
and then simply embracing him and what he
does. God's promise arrives as pure gift. That's
the only way everyone can be sure to get in on it,
those who keep the religious traditions and those
who have never heard of them.For Abraham is
father of us all. He is not our racial father - that's
reading the story backwards. He is our faith father.
17 We call Abraham "father" not because he got
God's attention by living like a saint, but because
God made something out of Abraham when he
was a nobody. Isn't that what we've always read
in Scripture, God saying to Abraham, "I set you
up as father of many peoples"? Abraham was first
named "father" and then became a father because
he dared to trust God to do what only God could
do: raise the dead to life, with a word make
something out of nothing.
18 When everything was hopeless, Abraham
believed anyway, deciding to live not on the basis
of what he saw he couldn't do but on what God
said he would do. And so he was made father of
a multitude of peoples. God himself said to him,
"You're going to have a big family, Abraham!"
19 Abraham didn't focus on his own impotence and
say, "It's hopeless. This hundred-year-old body
could never father a child." Nor did he survey
Sarah's decades of infertility and give up.
20 He didn't tiptoe around God's promise asking
cautiously skeptical questions. He plunged into
the promise and came up strong, ready for God,
21 sure that God would make good on what he
had said. 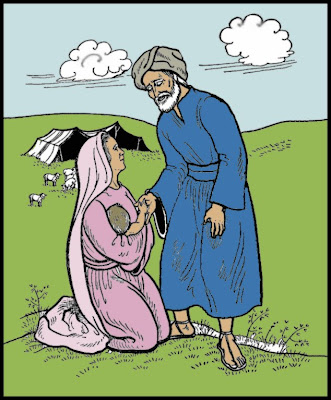 22 That's why it is said, "Abraham was declared
fit before God by trusting God to set him right."
23 But it's not just Abraham;
24 it's also us! The same thing gets said about
us when we embrace and believe the One who
brought Jesus to life when the conditions were
equally hopeless.
25 The sacrificed Jesus made us fit for God, set
us right with God.
———————————————————————
SUNDAY SCHOOL IN ADAIR U.M.C. 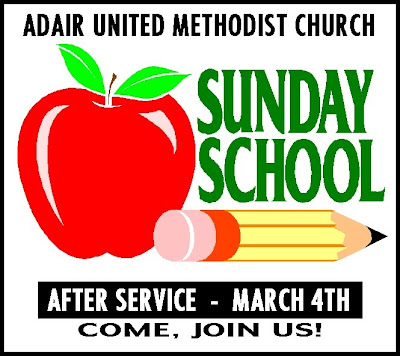 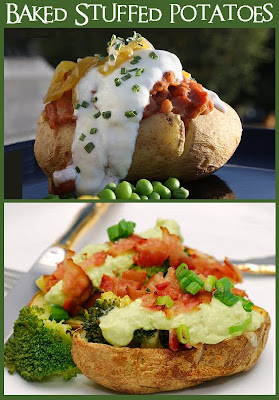 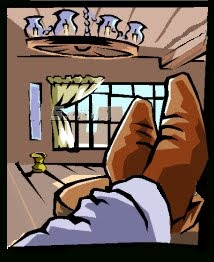 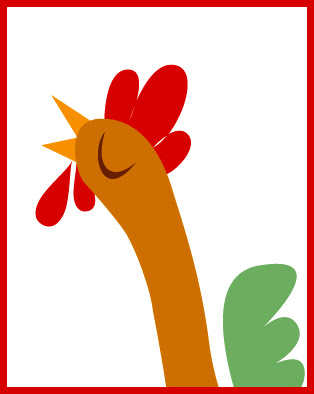 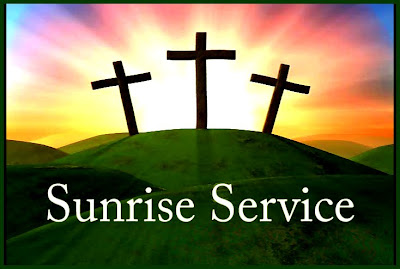 "Like the bee gathering honey from the different flowers,
the wise person accepts the essence of the different
scriptures and sees only the good in all religions."
— Mahatma Gandhi

Baha'i Prayer for Peace
Be generous in prosperity, and thankful in adversity.
Be fair in thy judgment, and guarded in thy speech.

Be a lamp unto those who walk in darkness, and a
home to the stranger.
Be eyes to the blind, and a guiding light unto the feet
of the erring.

Be a breath of life to the body of humankind, a dew
to the soil of the human heart, and a fruit upon the
tree of humility.

Blessed are the Peacemakers,
for they shall be known as the Children of God.

But I say to you that hear, love your enemies,
do good to those who hate you,

bless those who curse you,
pray for those who abuse you.

To those who strike you on the cheek,
offer the other also,
and from those who take away your cloak,
do not withhold your coat as well.

Give to everyone who begs from you,
and of those who take away your goods,
do not ask for them again.
And as you wish that others would do to you,
do so to them.
———————————————————————
There is a heavy burden this year on our
World Day of Prayer. Many human conflicts in
many countries world wide. African civil wars and
drought bring ensuing starvation and homelessness.
Civil conflicts in the middle east that seemingly
stem from a simple lack of tolerance, acceptance,
and understanding— and a blinding insistence on
self gratification, and greed among a very few self
placed potentates.

The days of autocrats and governments hiding the
truth from the people they serve have vanished.
Many governments still work tirelessly to keep the
internet beyond their borders. In spite of force
and control, people find a way to gain access.
There is something very appealing and irresistible
about freedom. Pray for the oppressed.

Pray for the world.
God Bless and Keep You,
Pastor Bob