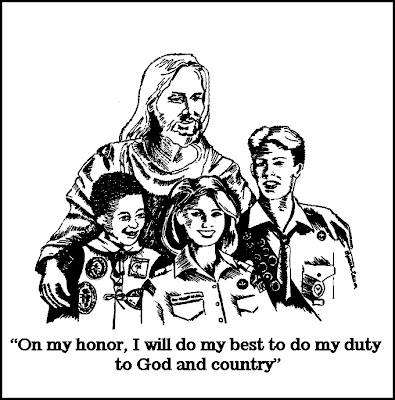 United Methodist churches each year as
members of scouting and youth organizations.
Surveys show that 300,000 (half) come from
unchurched families. 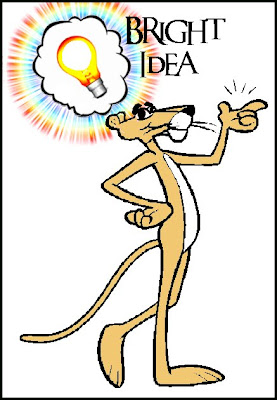 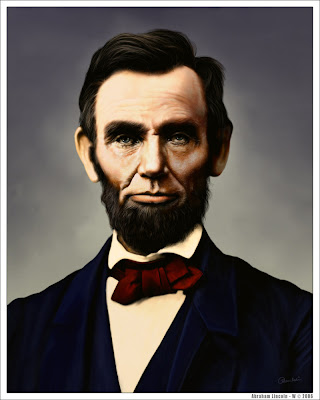 • He was the 16th President of the United States,
serving from March 1861 through the Civil War,
until his assassination in April 1865.
• He preserved the Union, and ended slavery with
the Emancipation Proclamation of 1863.
• An exceptionally astute politician, Lincoln was
mostly self-educated. His Gettysburg Address of
1863 became the most quoted speech in
American history. Most of us learned it in grade
school.
——————————————————————
SCRIPTURE READINGS FOR TODAY:
2 KINGS 5:1-14
(The Message)
Naaman, an army commander in Syria, appears
still to have plenty of connections to power and
to community in his cultural setting, even though
he has come down with leprosy. Naaman seeks
healing for his leprosy. His king sends him to the
king of Israel, and that king sends him to Elisha.
Elisha sends a messenger to tell Naaman to dip
in the Jordan River seven times.
1 Naaman was general of the army under the king of
Aram. He was important to his master, who held him
in the highest esteem because it was by him that God
had given victory to Aram. He is a truly great man, but
afflicted with a grievous skin disease.
2 It so happened that Aram, on one of its raiding
expeditions against Israel, captured a young girl who
became a maid to Naaman's wife. 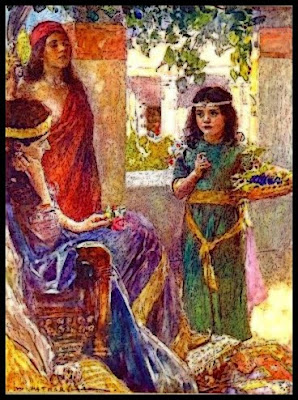 3 One day she said to her mistress, "Oh, if only my
master could meet the prophet of Samaria, he would
be healed of his skin disease."
4 Naaman went straight to his master and reported
what the girl from Israel had said.
5 "Well then, go," said the king of Aram. "And I'll
send a letter of introduction to the king of Israel."
So Naaman went off, taking with him about 750
pounds of silver, 150 pounds of gold, and ten sets
of clothes.
6 Naaman delivered the letter to the king of Israel.
The letter read, "When you get this letter, you'll
know that I've personally sent my servant Naaman
to you; heal him of his skin disease."
7 When the king of Israel read the letter, he was
terribly upset, ripping his robe to pieces. He said,
"Am I a god with the power to bring death or life that
I get orders to heal this man from his disease? 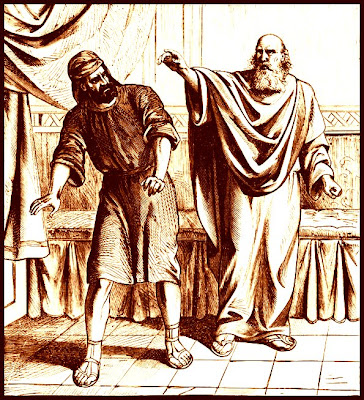 What's going on here? That king's trying to pick a
fight, that's what!"
8 Elisha the man of God heard what had happened,
that the king of Israel was so distressed that he'd
ripped his robe to shreds. He sent word to the king,
"Why are you so upset, ripping your robe like this?
Send him to me so he'll learn that there's a prophet
in Israel."
9 So Naaman with his horses and chariots arrived
in style and stopped at Elisha's door. 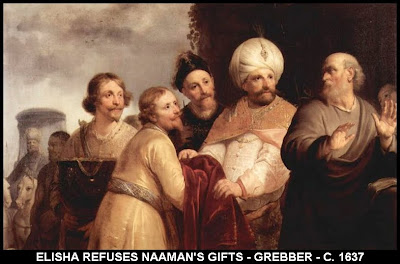 10 Elisha sent out a servant to meet him with this
message: "Go to the River Jordan and immerse
yourself seven times. Your skin will be healed and
you'll be as good as new."
11 Naaman lost his temper. He turned on his heel
saying, "I thought he'd personally come out and meet
me, call on the name of God, wave his hand over the
diseased spot, and get rid of the disease.
12 The Damascus rivers, Abana and Pharpar, are
cleaner by far than any of the rivers in Israel. Why not
bathe in them? I'd at least get clean." He stomped off,
mad as a hornet.
13 But his servants caught up with him and said,
"Father, if the prophet had asked you to do something
hard and heroic, wouldn't you have done it? So why
not this simple 'wash and be clean'?"
14 So he did it. He went down and immersed himself
in the Jordan seven times, following the orders of the
Holy Man, Elisha. 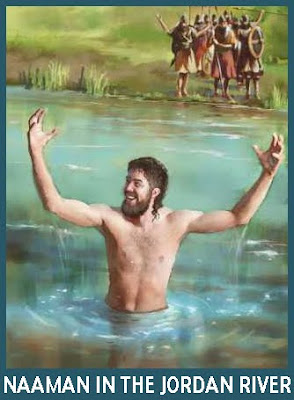 His skin was healed; it was like the
skin of a little baby. He was as good as new.
————————————————————————
PSALM 30 (UMH 762)
(The Message)
A psalm of thanksgiving for healing.
1 I give you all the credit, God - you got me out of that
mess, you didn't let my foes gloat.
2 God, my God, I yelled for help and you put me
together.
3 God, you pulled me out of the grave, gave me
another chance at life when I was down-and-out.
4 All you saints! Sing your hearts out to God!
Thank him to his face!
5 He gets angry once in a while, but across a
lifetime there is only love. The nights of crying your
eyes out give way to days of laughter.
6 When things were going great I crowed, "I've got
it made.
7 I'm God's favorite. He made me king of the
mountain." Then you looked the other way and I fell
to pieces.
8 I called out to you, God; I laid my case before you:
9 "Can you sell me for a profit when I'm dead?
auction me off at a cemetery yard sale? When I'm
'dust to dust' my songs and stories of you won't sell.
10 So listen! and be kind! Help me out of this!"
11 You did it: you changed wild lament into whirling
dance; 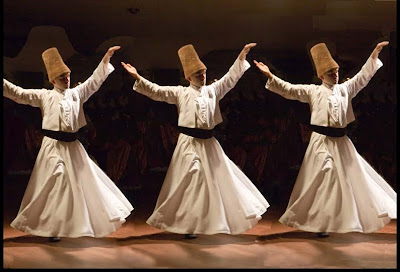 You ripped off my black mourning band and decked
me with wildflowers. 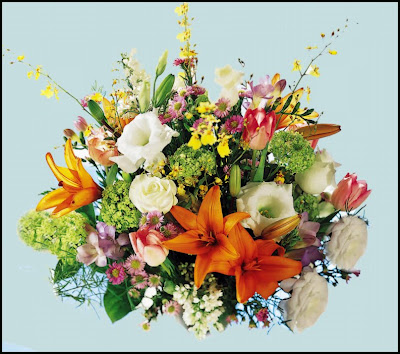 12 I'm about to burst with song; I can't keep quiet
about you. God, my God, I can't thank you enough.
————————————————————————
1 CORINTHIANS 9:24-27
(The Message)
Review of the lifeways you have explored over
the course of these five weeks is in order today.
• We understand and treat our bodies as temples
of the indwelling Holy Spirit.
• We "live light" in this world because the
ongoing coming of God's kingdom means this
world is passing away.
• We express our liberty most fully when we limit
it to love the least.
• We become all things to all people that we may
be part of saving some.
• The fifth lifeway - -
self-discipline so you can run
to win. To excel at anything, takes some talent,
perhaps, but never talent alone. It was always
some talent, plus lots and lots of training, lots
and lots of practice. And, as we see in the
conclusion of this series;
• We do it all with intense, physical and spiritual
self-discipline because we are intent on gaining
the race. Everyone runs; one wins. Run to win.
25 All good athletes train hard. They do it for a gold
medal that tarnishes and fades. You're after one
that's gold eternally.
26 I don't know about you, but I'm running hard for
the finish line. I'm giving it everything I've got. No
sloppy living for me!
27 I'm staying alert and in top condition. I'm not going
to get caught napping, telling everyone else all about
it and then missing out myself.

• Malcolm Gladwell's book, “Outliers”, gathers and
reflects on the stories of a number of people in a
variety of walks of life whose success has been
remarkable. None of these people, by their own
admission, Gladwell affirms, were especially
talented to do what they did. They all got to where
they are today because an opportunity opened up
to them that they were committed to take, and they
spent at least 10,000 hours of practice in the kinds
skills needed to take advantage of the opportunity.
————————————————————————
MARK 1:40-45
(The Message)
Jesus is moved by compassion to touch and
cleanse a leper. The leper in Mark's gospel was an
outcast, and probably had been for years, and had
no one to advocate for him but himself. Just as
quickly, Jesus finds himself angrily ordering the
man not to tell others but rather to show himself
to the priests, and "cast him out" (the same word
used for casting out demons!). The cleansed man
tells all, so strangest of all, the ultimate outcome
of Jesus' act of compassion is that the leper,
was received back into his town or village. Jesus,
the compassionate cleanser, was banished from
towns and villages. The leper is now celebrity.
Jesus is now outcast, persona non grata. . . He
knew that his first missionary strategy of visiting
town to town was at an end. People were now
coming to him out in the countryside . . . from
everywhere (verse 45). Perhaps being banished
to the "heath" (home of the "heathen!") did
positively serve Jesus' mission. After all, poverty
rates "out there" were much higher, and the
systems that could care for them much less
practical than in the towns and cities.
40 A leper came to him, begging on his knees,
"If you want to, you can cleanse me."
41 Deeply moved, Jesus put out his hand, touched
him, and said, "I want to. Be clean."
42 Then and there the leprosy was gone, his skin
smooth and healthy.
43 Jesus dismissed him with strict orders:
44 "Say nothing to anyone. Take the offering for
cleansing that Moses prescribed and present
yourself to the priest. This will validate your healing
to the people."
45 But as soon as the man was out of earshot,
he told everyone he met exactly what had happened,
spreading the news all over town. So Jesus kept to
out-of-the-way places, no longer able to move freely
in and out of the city. 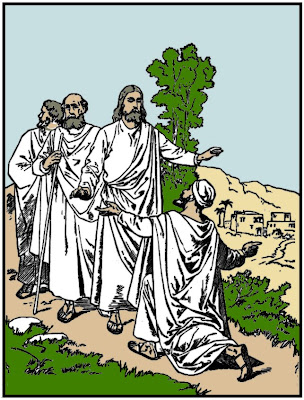 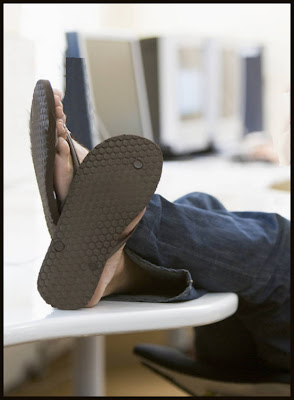 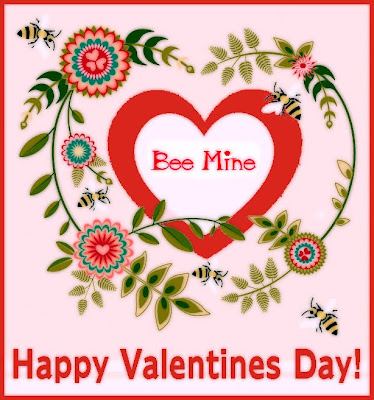 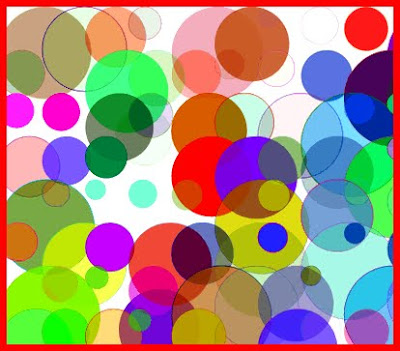