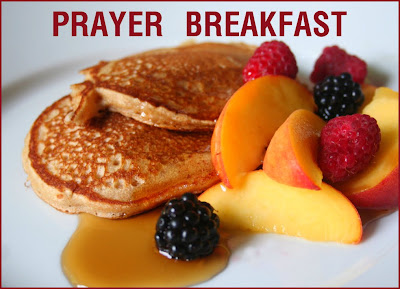 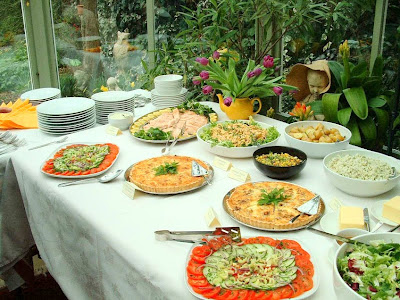 SCRIPTURE READINGS FOR TODAY:
1 KINGS 21:1-21 (The Message)
When Naboth refused to sell King Ahab his
vineyard, Ahab's wife, Jezebel plotted the
murder of Naboth. Elijah had gone through
a long "season" of being sidelined, marginalized,
hunted down and nearly silenced, especially after
his "victory" against the prophets of Baal on
Mt. Carmel. All of that season of discouragement
and exile prepared him to be recalled into another
season of activity, to encounter and confront Ahab
as we see him do today. — Now God puts Elijah
back in the game to face down Ahab in "his" new
vineyard.
1 And then, to top it off, came this: Naboth the Jezreelite
owned a vineyard in Jezreel that bordered the palace of
Ahab king of Samaria.
2 One day Ahab spoke to Naboth, saying, "Give me
your vineyard so I can use it as a kitchen garden; it's
right next to my house - so convenient. In exchange I'll
give you a far better vineyard, or if you'd prefer I'll pay
you money for it."
3 But Naboth told Ahab, "Not on your life! So help me
God, I'd never sell the family farm to you!" 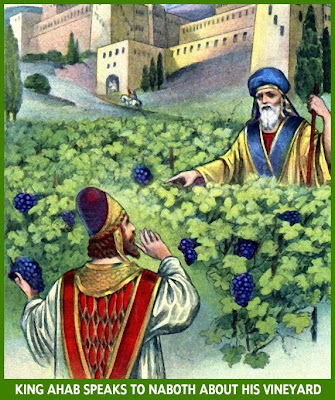 4 Ahab went home in a black mood, sulking over Naboth
the Jezreelite's words, "I'll never turn over my family
inheritance to you." He went to bed, buried his face in
his pillow, and refused to eat.
5 Jezebel his wife came to him. She said, "What's going
on? Why are you so out of sorts and refusing to eat?"
6 He told her, "Because I spoke to Naboth the Jezreelite.
I said, 'Give me your vineyard - I'll pay you for it or, if
you'd rather, I'll give you another vineyard in exchange.'
And he said, 'I'll never give you my vineyard.'"
7 Jezebel said, "Is this any way for a king of Israel to
act? Aren't you the boss? On your feet! Eat! Cheer up!
I'll take care of this; I'll get the vineyard of this Naboth
the Jezreelite for you." 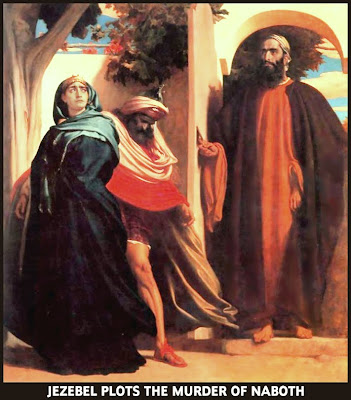 8 She wrote letters over Ahab's signature, stamped them
with his official seal, and sent them to the elders in
Naboth's city and to the civic leaders.
9 She wrote "Call for a fast day and put Naboth at the
head table.
10 Then seat a couple of stool pigeons across from him
who, in front of everybody will say, 'You! You blasphemed
God and the king!' Then they'll throw him out and stone
him to death."
11 And they did it. The men of the city - the elders and
civic leaders - followed Jezebel's instructions that she
wrote in the letters sent to them.
12 They called for a fast day and seated Naboth at the
head table.
13 Then they brought in two stool pigeons and seated
them opposite Naboth. In front of everybody the two
degenerates accused him, "He blasphemed God and
the king!" The company threw him out in the street,
stoned him mercilessly, and he died.
14 When Jezebel got word that Naboth had been
stoned to death, she told Ahab, "Go for it, Ahab - take
the vineyard of Naboth the Jezreelite for your own, the
vineyard he refused to sell you.
Naboth is no more; Naboth is dead."
15-16 The minute Ahab heard that Naboth was dead,
he set out for the vineyard of Naboth the Jezreelite and
claimed it for his own.
17 Then God stepped in and spoke to Elijah the Tishbite,
18 "On your feet; go down and confront Ahab of Samaria,
king of Israel. You'll find him in the vineyard of Naboth;
he's gone there to claim it as his own.
19 Say this to him: 'God's word: What's going on here?
First murder, then theft?' Then tell him, 'God's verdict:
The very spot where the dogs lapped up Naboth's blood,
they'll lap up your blood - - that's right, your blood.'" 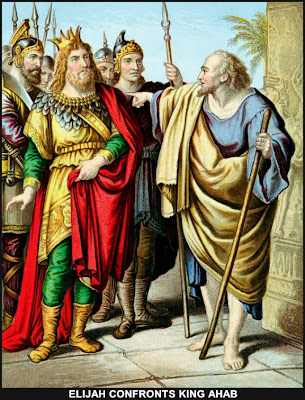 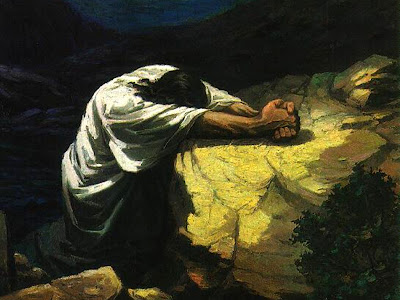 2 my groans and cries? King-God, I need your help.
3 Every morning You hear me at it again. Every morning
I lay out the pieces of my life on your altar and watch for
fire to descend.
4 You don't socialize with Wicked, or invite Evil over as
your house guest.
5 Hot-Air-Boaster collapses in front of you; you shake
your head over Mischief-Maker.
6 God destroys Lie-Speaker; Blood-Thirsty and
Truth-Bender disgust you.
7 And here I am, your invited guest - it's incredible! I
enter your house; here I am, prostrate in your inner
sanctum,
8 Waiting for directions to get me safely past enemy
lines.
≈≈≈≈≈≈≈≈≈≈≈≈≈≈≈≈≈≈≈≈≈≈≈≈≈≈≈≈≈≈≈≈≈≈≈≈≈≈≈≈≈≈≈≈≈
GALATIANS 2:15-21
(The Message)
Paul explains how important it is that he (and
Christians in Galatia who receive this letter) not
go back to trusting in the law for justification, but
rather in Christ. We are his disciples - - students
directly of him, not primarily proponents of, or
experts in theological assertions.
15 We Jews know that we have no advantage of birth
over "non-Jewish sinners."
16 We know very well that we are not set right with
God by rule-keeping but only through personal faith in
Jesus Christ. How do we know? We tried it - and we
had the best system of rules the world has ever seen!
Convinced that no human being can please God by
self-improvement, we believed in Jesus as the Messiah
so that we might be set right before God by trusting in
the Messiah, not by trying to be good.
17 Have some of you noticed that we are not yet
perfect? (No great surprise, right?) And are you ready
to make the accusation that since people like me, who
go through Christ in order to get things right with God,
aren't perfectly virtuous, Christ must therefore be an
accessory to sin? The accusation is frivolous.
18 If I was "trying to be good," I would be rebuilding the
same old barn that I tore down. I would be a charlatan.
19 What actually took place is this: I tried keeping rules
and working my head off to please God, and it didn't
work. So I quit being a "law man" so that I could be
God's man.
20 Christ's life showed me how, and enabled me to
do it. I identified myself completely with him. Indeed,
I have been crucified with Christ. My ego is no longer
central. It is no longer important that I appear
righteous before you or have your good opinion, and I
am no longer driven to impress God. Christ lives in me.
The life you see me living is not "mine," but it is lived
by faith in the Son of God, who loved me and gave
himself for me.
21 I am not going to go back on that. Is it not clear to
you that to go back to that old rule-keeping,
peer-pleasing religion would be an abandonment of
everything personal and free in my relationship with
God? I refuse to do that, to repudiate God's grace. If
a living relationship with God could come by
rule-keeping, then Christ died unnecessarily.
≈≈≈≈≈≈≈≈≈≈≈≈≈≈≈≈≈≈≈≈≈≈≈≈≈≈≈≈≈≈≈≈≈≈≈≈≈≈≈≈≈≈≈≈≈
LUKE 7:36–8:3
(The Message)
Luke portrays Jesus in a very odd and awkward
set of circumstances at the crux of a significant
clash of cultures. He's been invited to the house
of a Pharisee for a banquet. The banquet appears
to have been offered "Greco/Roman-style,"
including reclining on couches or cushions rather
than sitting at tables, identifying the host as one
of the wealthy, indeed as being more identified
with the top stratum of the occupation culture
(Rome) than native Judean practice. So the point
is well made that this Pharisee is thought to be at
the pinnacle of both religious and cultural life.
Jesus "is reclined" there (verse 36), which probably
means he was simply shown where he was
intended to be and took his position.
At the table of Simon, a Pharisee, a sinful woman
anoints Jesus' feet, and Jesus announces that her
sins are forgiven.
LUKE 7:36-50;
36 One of the Pharisees asked him over for a meal.
He went to the Pharisee's house and sat down at the
dinner table.
37 Just then a woman of the village, the town harlot,
having learned that Jesus was a guest in the home of
the Pharisee, came with a bottle of very expensive
perfume
38 and stood at his feet, weeping, raining tears on his
feet. Letting down her hair, she dried his feet, kissed
them, and anointed them with the perfume. 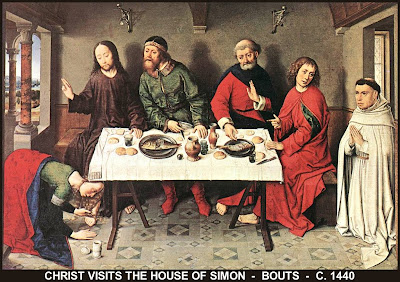 39 When the Pharisee who had invited him saw this,
he said to himself, "If this man was the prophet I
thought he was, he would have known what kind of
woman this is who is falling all over him."
40 Jesus said to him, "Simon, I have something to
tell you." "Oh? Tell me."
41 "Two men were in debt to a banker. One owed
five hundred silver pieces, the other fifty.
42 Neither of them could pay up, and so the banker
canceled both debts. Which of the two would be
more grateful?"
43 Simon answered, "I suppose the one who was
forgiven the most."
44 Then turning to the woman, but speaking to Simon,
he said, "Do you see this woman? I came to your
home; you provided no water for my feet, but she
rained tears on my feet and dried them with her hair.
45 You gave me no greeting, but from the time I
arrived she hasn't quit kissing my feet.
46 You provided nothing for freshening up, but she
has soothed my feet with perfume.
47 Impressive, isn't it? She was forgiven many, many
sins, and so she is very, very grateful. If the forgiveness
is minimal, the gratitude is minimal."
48 Then he spoke to her: "I forgive your sins."
49 That set the dinner guests talking behind his back:
"Who does he think he is, forgiving sins!"
50 He ignored them and said to the woman, "Your faith
has saved you. Go in peace."
LUKE 8:1-3
1 He continued according to plan, traveled to town after
town, village after village, preaching God's kingdom,
spreading the Message. The Twelve were with him. 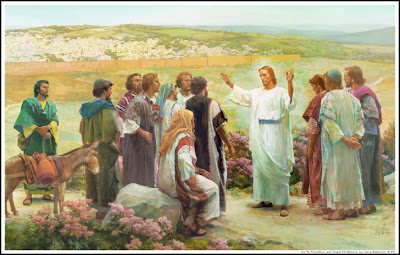 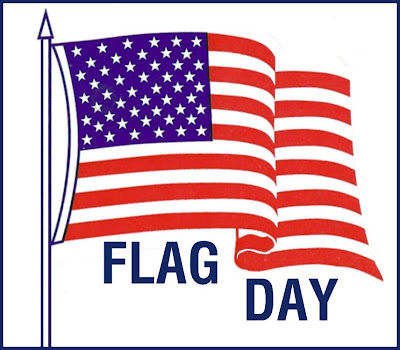 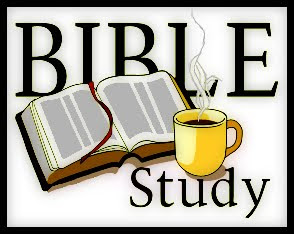 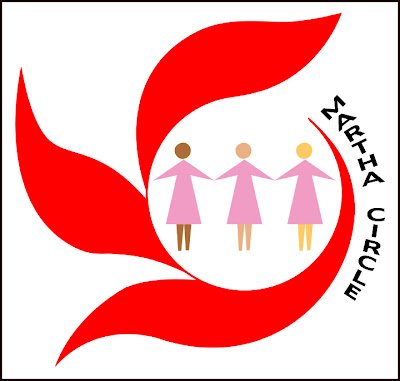 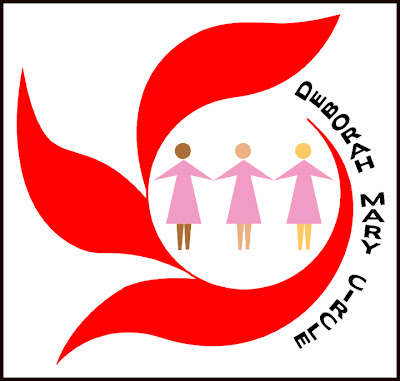 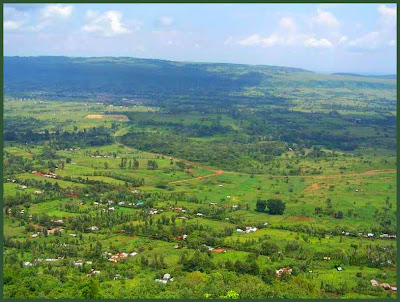 I dearly love a green world. We are fortunate to live in
one of the most magnificent green belts on earth. The
rains and soils can sustain the animal life of this and
many other nations.

Our southern, northern, and eastern neighbors have
recently experienced dreadful and terrible winds and,
yes, too much rain. 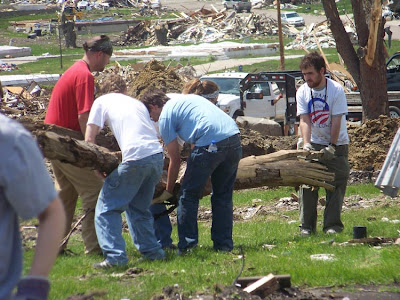 We remember Parkersburg of 2008, and know recovery
is a long, tedious, expensive process. We can survive,
rebuild, and return, but it may never be the same.

Our hearts and prayers go out to the families who have
likely endured the worst experience of their lives. We
pray for their strength and stamina to resuscitate,
regenerate, and revitalize those lives.

The pendulum swings. This may be the darkest hour,
but tomorrow may be dazzlingly, remarkably, brilliant.