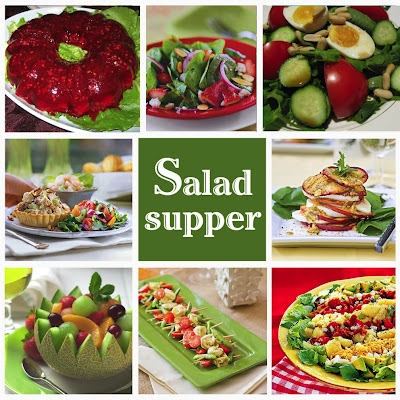 For more information, talk to Barry or Rhonda
≈≈≈≈≈≈≈≈≈≈≈≈≈≈≈≈≈≈≈≈≈≈≈≈≈≈≈≈≈≈≈≈≈≈≈≈≈≈≈≈≈≈≈
SUNDAY, OCTOBER 25TH —
The Twenty-First Sunday after Pentecost
Color: Green
SCRIPTURE READINGS ARE: Job 42:1-6, 10-17
NEW LIVING TRANSLATION (NLT)
Job was now aware of his guilt; he would no longer
speak of his own excuse; he sees himself as a sinner
in heart and life, especially for murmuring against God,
and took shame to himself. When the understanding is
enlightened by the Spirit of grace, our knowledge of
Divine things far exceeds what we had before. Job
acknowledges God's power and presence and his own
need to repent. God restores all Job had two-fold when
Job offered intercession for the "friends" who had
misrepresented God.
JOB 42:1-6
Job Responds to the Lord
1 Then Job replied to the Lord:
2 “I know that you can do anything,
and no one can stop you.
3 You asked, ‘Who is this that questions my wisdom
with such ignorance?’
It is I—and I was talking about things I knew
nothing about, things far too wonderful for me.
4 You said, ‘Listen and I will speak!
I have some questions for you,
and you must answer them.’
5 I had only heard about you before,
but now I have seen you with my own eyes.
6 I take back everything I said, and
I sit in dust and ashes to show my repentance.” 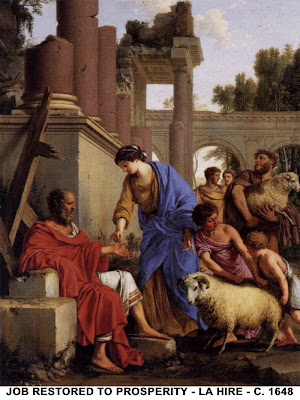 The Lord gave him twice as much as before!
11 Then all his brothers, sisters, and former friends came
and feasted with him in his home. And they consoled him
and comforted him because of all the trials the Lord had
brought against him. And each of them brought him a gift
of money and a gold ring.
12 So the Lord blessed Job in the second half of his life
even more than in the beginning. For now he had 14,000
sheep, 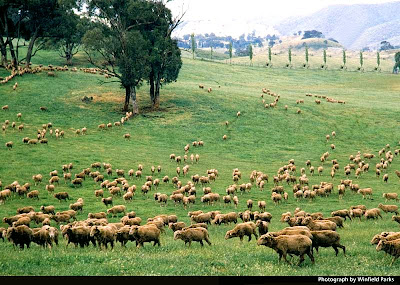 6,000 camels, 1,000 teams of oxen, and 1,000
female donkeys.
13 He also gave Job seven more sons and three more
daughters.
14 He named his first daughter Jemimah, the second
Keziah, and the third Keren-happuch.
15 In all the land no women were as lovely as the
daughters of Job. And their father put them into his will
along with their brothers.
16 Job lived 140 years after that, living to see four
generations of his children and grandchildren.
17 Then he died, an old man who had lived a long,
full life.
————————————————————————
PSALM 34:1-8, 19-22 (UMH 769)
NEW INTERNATIONAL VERSION (NIV)
A psalm of David, regarding the time he pretended to
be insane in front of Abimelech. David's prayers helped
to silence his fears; many besides him have looked
unto the Lord by faith and prayer, and it has
wonderfully revived and comforted them.
PSALM 34:1-8
1 I will extol the LORD at all times;
his praise will always be on my lips.
2 My soul will boast in the LORD;
let the afflicted hear and rejoice.
3 Glorify the LORD with me;
let us exalt his name together.
4 I sought the LORD, and he answered me;
he delivered me from all my fears.
5 Those who look to him are radiant;
their faces are never covered with shame.
6 This poor man called, and the LORD heard him;
he saved him out of all his troubles.
7 The angel of the LORD encamps around those
who fear him, and he delivers them.
8 Taste and see that the LORD is good;
blessed is the man who takes refuge in him.
PSALM 34:19-22
19 A righteous man may have many troubles,
but the LORD delivers him from them all;
20 he protects all his bones,
not one of them will be broken.
21 Evil will slay the wicked;
the foes of the righteous will be condemned.
22 The LORD redeems his servants;
no one will be condemned who takes refuge in him.
————————————————————————
HEBREWS 7:23-28
NEW INTERNATIONAL VERSION (NIV)
Christ's priesthood, a priesthood of intercession, has
ended sacrifices. By offering himself in obedience to
God, even to the point of death, Jesus became the
perfect and complete channel of intercession for the
whole world.
23 Now there have been many of those priests, since
death prevented them from continuing in office;
24 but because Jesus lives forever, he has a
permanent priesthood.
25 Therefore he is able to save completely those who
come to God through him, because he always lives to
intercede for them.
26 Such a high priest meets our need—one who is
holy, blameless, pure, set apart from sinners, exalted
above the heavens.
27 Unlike the other high priests, he does not need to
offer sacrifices day after day, first for his own sins, and
then for the sins of the people. He sacrificed for their
sins once for all when he offered himself.
28 For the law appoints as high priests men who are
weak; but the oath, which came after the law, appointed
the Son, who has been made perfect forever.
————————————————————————
MARK 10:46-52
NEW INTERNATIONAL VERSION (NIV)
As Jesus and his disciples leave Jericho for the final
journey to Jerusalem, a blind man, Bar Timaeus, seeks
healing, is healed, and becomes a disciple himself. The
healing of Bar Timaeus in Mark's gospel records the
striking eagerness (desperation?) of a blind beggar to
be seen and heard by Jesus in the face of a fickle
crowd of onlookers who appear to be trying to
"manage" or "handle" the blind man.
Mark 10:46-52
BLIND BARTIMAEUS RECEIVES HIS SIGHT
46 Then they came to Jericho. As Jesus, his disciples,
together with a large crowd, were leaving the city, a
blind man, Bartimaeus (which means "son of Timaeus"),
was sitting by the roadside begging.
47 When he heard that it was Jesus of Nazareth, he
began shouted, "Jesus, Son of David, have mercy on me!"
48 Many rebuked him and told him to be quiet, but he
shouted all the more, "Son of David, have mercy on me!"
49 Jesus stopped and said, "Call him." So they called to
the blind man, "Cheer up! On your feet! He's calling you."
50 Throwing his cloak aside, he jumped to his feet and
came to Jesus.
51 "What do you want me to do for you?" Jesus asked him.
The blind man said, "Rabbi, I want to see."
52 "Go," said Jesus, "your faith has healed you."
Immediately he received his sight and followed Jesus
along the road. 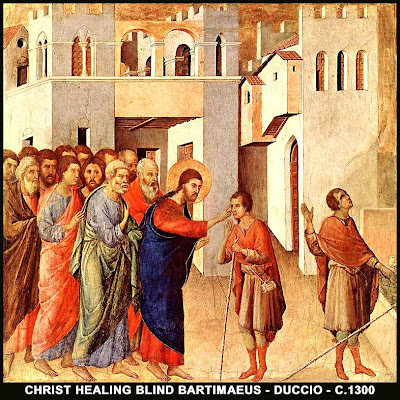 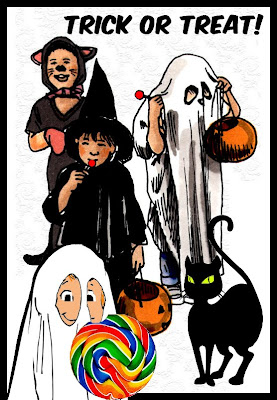 THIS NIGHT BEWARE OF QUICK, GIGGLING
LITTLE ANIMALS THAT DART ABOUT LIKE
NOISY BATS. WATCH CAREFULLY AS THEY
ARE VERY UNPREDICTABLE AND LIKELY
TO FRIGHTEN MANY OF THE GOOD PEOPLE
OF OUR COMMUNITY. I HAVE READ THAT A
SMALL SWEET TREAT WILL PLACATE THESE
UNUSUAL LITTLE ANIMALS, UNTIL THEY RISE
AGAIN NEXT YEAR — ABOUT THIS SAME TIME. 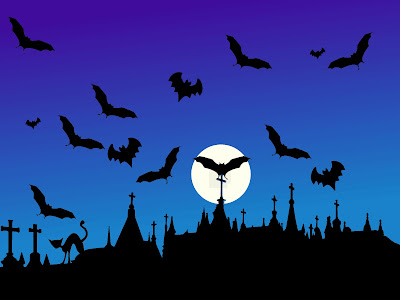 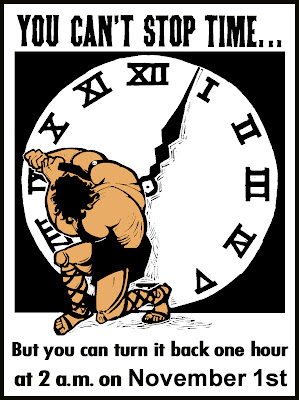 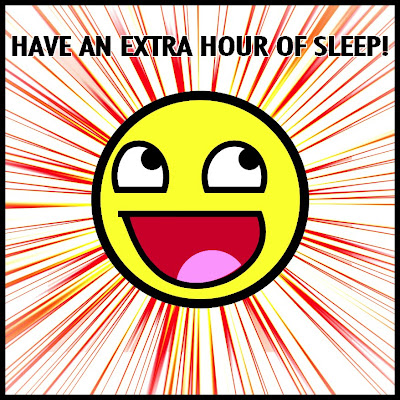