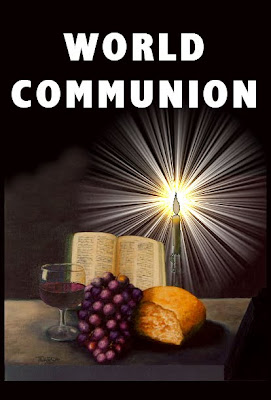 "We offer our praise, our gifts, and ourselves
"with your people on earth and all the
company of heaven."
——————————————————————
OUR SCRIPTURE READINGS ARE:
JOB 1:1; 2:1-10
(New International Reader's Version) NIRV
Job is the Bible's most thorough wrestling with the
problem of God and human suffering.
God continues to brag on how upright Job is,
despite having lost all of his children and all of his
property and wealth. Now the sores the Adversary
inflicts make Job unclean.
This is why Job takes up residence in the town's
garbage dump-ash heap.
Job insists that he had done nothing to deserve
what has befallen him, and he demands that God
show up to defend Himself for what has happened.
Job "perseveres in his integrity". 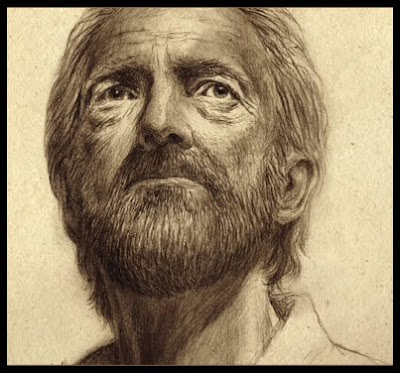 Job 1:1-3, EXPLANATION: 1:20-21
THE STORY BEGINS1 There was a man who lived in the land of Uz.
His name was Job. He was honest.
He did what was right.
He had respect for God and avoided evil.
2 Job had seven sons and three daughters.
3 He owned 7,000 sheep and 3,000 camels.
He owned 500 pairs of oxen and 500 donkeys.
He also had a large number of servants.
He was the most important man among all of
the people in the east. 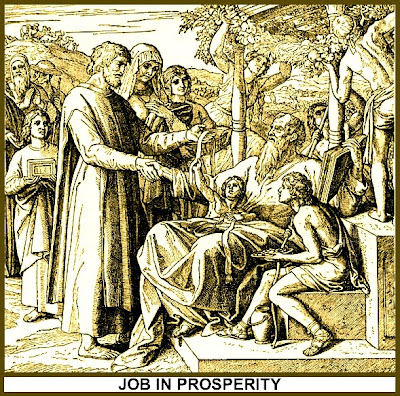 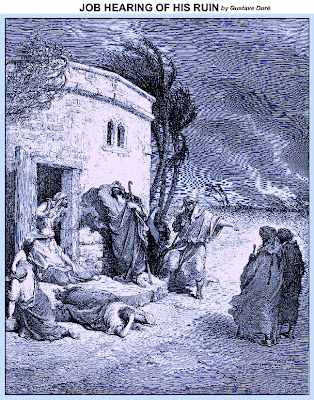 20 After Job heard all of the distressing reports,
he got up and tore his robe. He shaved his head.
Then he fell to the ground and worshiped the Lord.
21 He said,
"I was born naked.
And I'll leave here naked.
You have given, and you have taken away.
May your name be praised."
Job 2:1-10 JOB IS PUT TO THE TEST AGAIN
1 On another day angels came to the Lord.
Satan again came to him along with them.

2 The Lord said to Satan,
"Where have you come from?"
Satan answered, "From traveling around the earth.
I've been going from one end of it to the other."

3 Then the Lord said to Satan,
"Have you thought about my servant Job? There
isn't anyone on earth like him. He is honest. He does
what is right. He has respect for me and avoids evil.
You tried to turn me against him. You wanted me to
destroy him without any reason.
But he still continues to be faithful."

4 Satan replied, "A man will give everything he has
to save himself. So Job is willing to give up the lives
of his family to save his own life.

5 "But reach out your hand and strike his flesh and
bones. Then I'm sure he will speak evil things
against you. In fact, he'll do it right in front of you."

6 The Lord said to Satan, "All right. I am handing him
over to you. But you must spare his life."

7 Then Satan left the Lord and went on his way.
He sent painful sores on Job. They covered him from
the bottom of his feet to the top of his head.

8 He got part of a broken pot. He used it to scrape
his skin. He did it while he was sitting in ashes.

9 His wife said to him, "Are you still continuing to be
faithful to the Lord?
Speak evil things against him and die!"

10 Job replied, "You are talking like a foolish woman.
We accept good things from God. So we should also
accept trouble when he sends it."
In spite of everything, Job did not say anything
that was sinful.
——————————————————————
PSALM 26(UMH 756) (New Living Translation) NLT
This Psalm focuses on the theme of integrity
and asks for God's vindication on the basis of
the integrity of a person or community praying.

A PSALM OF DAVID
1 Declare me innocent, O Lord,
for I have acted with integrity;
I have trusted in the Lord without wavering.
2 Put me on trial, Lord, and cross-examine me.
Test my motives and my heart. 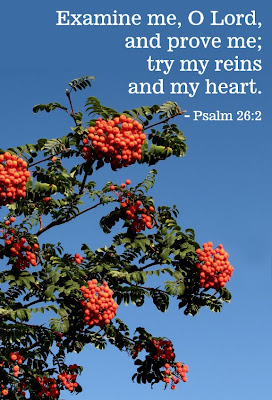 3 For I am always aware of your unfailing love,
and I have lived according to your truth.
4 I do not spend time with liars
or go along with hypocrites.
5 I hate the gatherings of those who do evil,
and I refuse to join in with the wicked.
6 I wash my hands to declare my innocence.
I come to your altar, O Lord,
7 singing a song of thanksgiving
and telling of all your wonders.
8 I love your sanctuary, Lord,
the place where your glorious presence dwells.
9 Don’t let me suffer the fate of sinners.
Don’t condemn me along with murderers.
10 Their hands are dirty with evil schemes,
and they constantly take bribes.
11 But I am not like that; I live with integrity.
So redeem me and show me mercy.
12 Now I stand on solid ground,
and I will publicly praise the Lord.
——————————————————————
HEBREWS 1:1-4; 2:5-12;
New Living Translation (NLT)
A proclamation and celebration of the glory of
Jesus Christ. This is not "Jesus our friend," but
Jesus the authoritative redeemer of all. THIS
begins by declaring the glory of Jesus Christ —
God's ultimate messenger and Son, with
majesty and authority above all angels, the
pioneer and perfecter of our salvation.

HEBREWS 1:1-4
Jesus Christ Is God’s Son
1 Long ago God spoke many times and in many
ways to our ancestors through the prophets.
2 And now in these final days, he has spoken to
us through his Son. God promised everything to
the Son as an inheritance, and through the Son
he created the universe.
3 The Son radiates God’s own glory and
expresses the very character of God, and he
sustains everything by the mighty power of his
command. 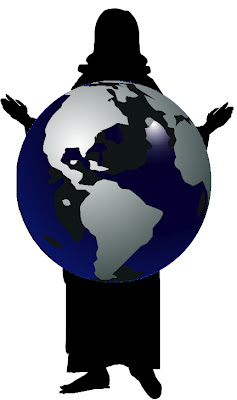 When he had cleansed us from our sins,
he sat down in the place of honor at the right hand
of the majestic God in heaven.
4 This shows that the Son is far greater than the
angels, just as the name God gave him is greater
than their names.

HEBREWS 2:5-12
Jesus, the Man
5 And furthermore, it is not angels who will control
the future world we are talking about.
6 For in one place the Scriptures say,
“What are mere mortals that you should think about
them, or a son of man that you should care for him?
7 Yet you made them only a little lower than the
angels and crowned them with glory and honor.
8 You gave them authority over all things.”Now
when it says “all things,” it means nothing is left
out. But we have not yet seen all things put under
their authority.
9 What we do see is Jesus, who was given a position
“a little lower than the angels”; and because he
suffered death for us, he is now “crowned with glory
and honor.” Yes, by God’s grace, Jesus tasted death
for everyone.
10 God, for whom and through whom everything was
made, chose to bring many children into glory. And it
was only right that he should make Jesus, through
his suffering, a perfect leader, fit to bring them into
their salvation.
11 So now Jesus and the ones he makes holy have
the same Father. That is why Jesus is not ashamed
to call them his brothers and sisters.
12 For he said to God, “I will proclaim your name to
my brothers and sisters. I will praise you among your
assembled people.”
——————————————————————
MARK 10:2-16
FAMILY VALUES: 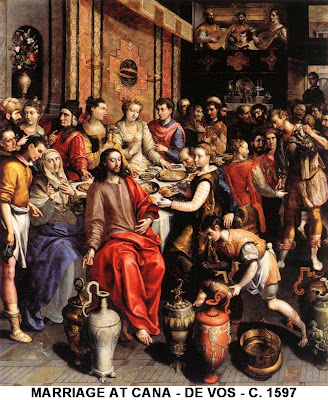 God blesses and establishes
the marriage bond to be a relationship that is
never simply discarded or reduced to disposable
property. Children are never to be treated as a
nuisance or distraction from our "real work," but
as beings blessed by Jesus and his disciples. 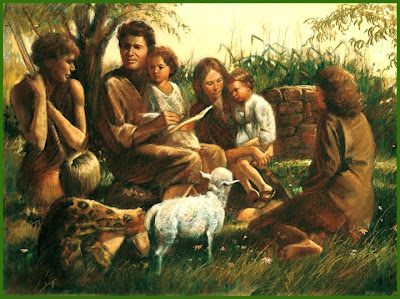 This is no time for "leave it alone" thinking on this
issue in the North American cultural context. This text has been a "text of terror" for many
women and men who are in marriage with a violent,
addicted, or otherwise abusive partner.
Many children and families have been ripped apart
by societal processes and pressures that makedivorce seem a "natural" part of a cultural life
built on individual fulfillment and disposability.
Think about our congregation. How many past
members are no longer in the congregation
because of divorce issues? Perhaps many.

Mark 10:2-16
(New International Reader's Version) NIRV
2 Some Pharisees came to put him to the test.
They asked, "Does the Law allow a man to divorce
his wife?"
3 "What did Moses command you?" he replied.
4 They said, "Moses allowed a man to write a letter
of divorce and send her away."
5 "You were stubborn. That's why Moses wrote you
this law," Jesus replied.
6 "But at the beginning of creation, God 'made them
male and female.'—(Genesis 1:27)
7 'That's why a man will leave his father and mother
and be joined to his wife.
8 The two of them will become one.'—(Genesis 2:24)
They are no longer two, but one.
9 Man must not separate what God has joined together."
10 When they were in the house again, the disciples
asked Jesus about this.
11 He answered, "What if a man divorces his wife and
gets married to another woman? He commits adultery
against her.
12 And what if she divorces her husband and gets
married to another man? She commits adultery."
Little Children Are Brought to Jesus
13 People were bringing little children to Jesus.
They wanted him to touch them. But the disciples told
the people to stop.
14 When Jesus saw this, he was angry. He said to
his disciples, "Let the little children come to me. Don't
keep them away. God's kingdom belongs to people
like them.
15 What I'm about to tell you is true. Anyone who
will not receive God's kingdom like a little child will
never enter it."
16 Then he took the children in his arms. He put his
hands on them and blessed them.
≈≈≈≈≈≈≈≈≈≈≈≈≈≈≈≈≈≈≈≈≈≈≈≈≈≈≈≈≈≈≈≈≈≈≈≈≈≈≈≈≈≈≈
MONDAY, OCTOBER 5TH —
This is Pastor Lynn's and Naomi's day off.
Today is Order of Elders Meeting.
≈≈≈≈≈≈≈≈≈≈≈≈≈≈≈≈≈≈≈≈≈≈≈≈≈≈≈≈≈≈≈≈≈≈≈≈≈≈≈≈≈≈≈
TUESDAY, OCTOBER 6TH —
Matthew Bible Study - 9 A.M. at Adair UMC
#1 Table Top Testament Study
Choir Practice - 7 P.M. at Casey UMC 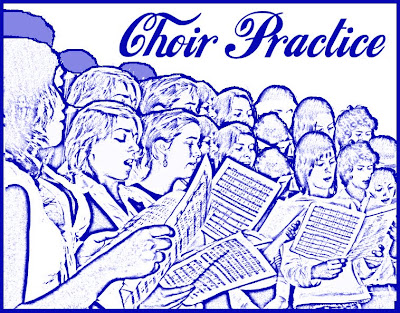 This is the National Day of Prayer for "MENTAL ILLNESS AND RECOVERY"
The magnitude of mental illness in this country
is staggering. According to the Surgeon General, one in every five Americans experiences a mentaldisorder in any given year. Half of all Americans have such disorders at some time in their lives.
These illnesses of the brain affect all of us,
regardless of age, gender, economic status or ethnicity. Nearly every person sitting in the pews has been touched in some way by mental illness.And yet individuals and families continue to
suffer in silence or stop coming to their faith
community because they are not receiving the
support they so desperately need. They become
detached from their faith community and their
spirituality, which is an important source of
healing, wholeness and hope in times of
personal darkness.

Department of Defense medical authorities state
that as many as 30% of returning Army Reserve
and Guard members struggle with significant
mental health issues. Suicides are a very real
concern.

The first important step is talking.
Most often the process begins when people tell
their story. Barriers of fear, ignorance and stigma
are broken down when we take the risk to break
the silence to speak out and tell our stories.
Those who have been in the depths of depression
know It can steal our sense of self worth, our
hopes and our dreams, our balance. When we
are asked to tell our stories, that is the least
likely thing we are about to do.

The most important gift that our faith communities
can provide is the gift of hope. Our communities
of faith can be a container of hope to remind us
that we are loved as a child of God...just as we are.
• Emily Dickenson wrote:
Hope is the thing with feathers
that perches in the soul
And sings a tune without words
And never stops - at all.

Don't ever think the situation is impossible.
The human animal has the most astounding,
remarkable restorative capabilities. 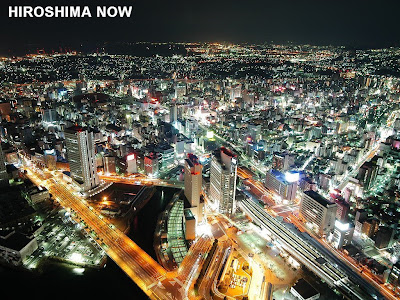