REMINDERS —
WEDNESDAY, JUNE 24TH —
Worship service at The New Homestead in Guthrie
Center @ 10 A.M.
≈≈≈≈≈≈≈≈≈≈≈≈≈≈≈≈≈≈≈≈≈≈≈≈≈≈≈≈≈≈≈≈≈≈≈≈≈≈≈≈≈≈
SUNDAY, JUNE 28, 2009 —
Fourth Sunday after Pentecost
COLOR: GREEN
≈≈≈≈≈≈≈≈≈≈≈≈≈≈≈≈≈≈≈≈≈≈≈≈≈≈≈≈≈≈≈≈≈≈≈≈≈≈≈≈≈≈
OUR SCRIPTURE READINGS FOR TODAY ARE:
2 SAMUEL 1:1, 17-27
David learns from an Amalekite that Saul and
Jonathan are dead and Saul's army was routed
by the Philistines. That an Amalekite delivers
these words is triply ironic. David's troops had
just defeated an Amalekite contingent.
This Amalekite had actually killed Saul at Saul's
own request. Saul's efforts to fall on his own
spear injured him but did not kill him.This Amalekite also brought Saul's crown to
make David the next King. A citizen of the defeated
enemy kills the former king and helps crown a new
one. David leads his troops in a public (national)
lament for the deaths of Saul and Jonathan.
The Bow probably was the title of this mournful,
funeral song. David does not commend Saul for
what he was not; and says nothing of his piety
or goodness. Jonathan was a dutiful son, Saul an
affectionate father, therefore dear to each other.
David had reason to say that Jonathan's love to
him was wonderful. 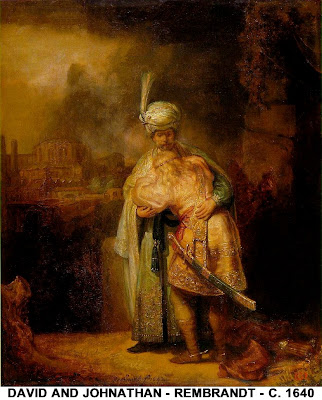 I try to envision the scope of declaring a national
lament in those days. I do not know what the
population of Israel would have been but we are
talking 8,000 square miles of country and no cell
phones or televisions. How did the word get
passed around? How long did it take?

2 SAMUEL 1:17-27
DAVID'S SONG OF SADNESS FOR
SAUL AND JONATHAN
17 David sang a song of sadness about Saul and
his son Jonathan.
18 He ordered that it be taught to the people of
Judah. It is called The Song of the Bow. It is written
down in the Book of Jashar.

19 "Israel, your glorious leaders lie dead on the hills.
Your mighty men have fallen.
20 "Don't announce it in Gath.
Don't tell it in the streets of Ashkelon.
If you do, the daughters of the Philistines will be
glad. The daughters of men who haven't been
circumcised will be joyful.
21 "Mountains of Gilboa, may no dew or rain fall
on you. May your fields not produce any
offerings of grain. The shield of the mighty king
lies polluted there. The shield of Saul lies there.
It isn't rubbed with oil anymore.
22 The bow of Jonathan didn't turn back.
The sword of Saul didn't return without being
satisfied. They spilled the blood of their enemies.
They killed mighty men.
23 "In life Saul and Jonathan were loved and
gracious. In death they were not parted.
They were faster than eagles.
They were stronger than lions.
24 "Daughters of Israel, sob over Saul.
He dressed you in the finest clothes.
He decorated your clothes with ornaments
of gold.
25 "Your mighty men have fallen in battle.
Jonathan lies dead on your hills.
26 My brother Jonathan, I'm filled with sadness
because of you. You were very special to me.
Your love for me was wonderful.
It was more wonderful than the love of women.
27 "Israel's mighty men have fallen. Their weapons
of war are broken."
≈≈≈≈≈≈≈≈≈≈≈≈≈≈≈≈≈≈≈≈≈≈≈≈≈≈≈≈≈≈≈≈≈≈≈≈≈≈≈≈≈≈
PSALM 130 (UMH 848)
(New Living Translation) NLT
Many things present themselves as diversions, many
things offer themselves as remedies, but the soul finds
that the Lord alone can heal. In response to the cry of
national lament, "Out of the depths I cry to you, O Lord!"
A SONG FOR PILGRIMS ASCENDING TO JERUSALEM — 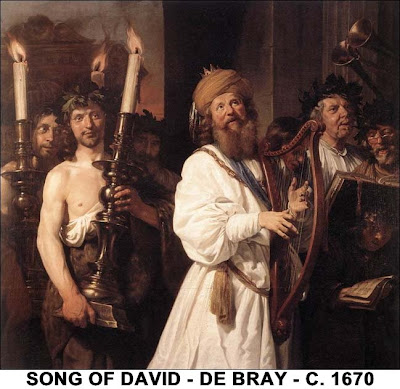 1 From the depths of despair, O Lord,
I call for your help.
2 Hear my cry, O Lord.
Pay attention to my prayer.

3 Lord, if you kept a record of our sins,
who, O Lord, could ever survive?
4 But you offer forgiveness,
that we might learn to fear you.

7 O Israel, hope in the Lord;
for with the Lord there is unfailing love.
His redemption overflows.
8 He himself will redeem Israel
from every kind of sin.
≈≈≈≈≈≈≈≈≈≈≈≈≈≈≈≈≈≈≈≈≈≈≈≈≈≈≈≈≈≈≈≈≈≈≈≈≈≈≈≈≈≈
2 CORINTHIANS 8:7-15
(New International Version) NIV
Paul reminds the church to make good on its
promise to provide generous support to his
collection for the poor. We humans are selfish
by nature. Generosity is not something that comes
naturally but is the result of God's grace in our lives.
This is why Paul refers to the Corinthian offering
as this act of grace.

7 But just as you excel in everything—in faith, in speech,
in knowledge, in complete earnestness and in your love
for us—see that you also excel in this grace of giving.
8 I am not commanding you, but I want to test the
sincerity of your love by comparing it with the
earnestness of others.
9 For you know the grace of our Lord Jesus Christ,
that though he was rich, yet for your sakes he
became poor, so that you through his poverty
might become rich.
10 And here is my advice about what is best for
you in this matter: Last year you were the first not
only to give but also to have the desire to do so.
11 Now finish the work, so that your eager willingness
to do it may be matched by your completion of it,
according to your means.
12 For if the willingness is there, the gift is acceptable
according to what one has, not according to what he
does not have.
13 Our desire is not that others might be relieved
while you are hard pressed, but that there might be
equality.
14 At the present time your plenty will supply what
they need, so that in turn their plenty will supply
what you need. Then there will be equality,
15 as it is written: "He who gathered much did not
have too much, and he who gathered little didn't
have too little."
≈≈≈≈≈≈≈≈≈≈≈≈≈≈≈≈≈≈≈≈≈≈≈≈≈≈≈≈≈≈≈≈≈≈≈≈≈≈≈≈≈≈
MARK 5:21-43 Illustrations of the power of the Word
to bring abundance of life where no life seemed
possible: the healing of a woman with an issue of
blood and the raising of the daughter of Jairus who
had died. Jesus went to Jairus' home with a mission
of healing her daughter. It is common for people not
to apply to Christ till they have tried in vain all other
help, and find them physicians of no value. The more
simply we depend on Him, and expect great things
from him, the more we shall find in ourselves that he
is become our salvation.
Mark 5:21-43
(New International Reader's Version) NIRV
A Dying Girl and a Suffering Woman
21 Jesus went across the Sea of Galilee in a boat.
It landed at the other side. There a large crowd
gathered around him.
22 Then a man named Jairus came. He was a
synagogue ruler. Seeing Jesus, he fell at his feet.
23 He begged Jesus, "Please come. My little
daughter is dying. Place your hands on her to
heal her. Then she will live."
24 So Jesus went with him. A large group of people
followed. They crowded around him.
25 A woman was there who had a sickness that
made her bleed. It had lasted for 12 years.
26 She had suffered a great deal, even though she
had gone to many doctors. She had spent all the
money she had. But she was getting worse, not better.
27 Then she heard about Jesus. She came up behind
him in the crowd and touched his clothes.
28 She thought, "I just need to touch his clothes.
Then I will be healed." 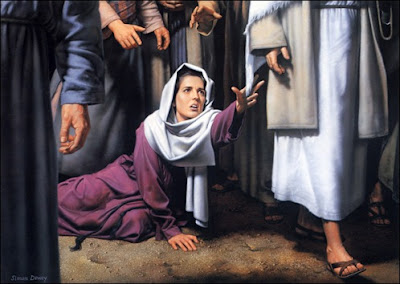 29 Right away her bleeding stopped. She felt in her
body that her suffering was over.
30 At once Jesus knew that power had gone out from
him. He turned around in the crowd.
He asked, "Who touched my clothes?"
31 "You see the people," his disciples answered.
"They are crowding against you. And you still ask,
'Who touched me?' "
32 But Jesus kept looking around. He wanted to see
who had touched him.
33 Then the woman came and fell at his feet. She knew
what had happened to her. She was shaking
with fear. But she told him the whole truth.
34 He said to her, "Dear woman, your faith has healed
you. Go in peace. You are free from your suffering."
35 While Jesus was still speaking, some people came
from the house of Jairus. He was the synagogue ruler.
"Your daughter is dead," they said. "Why bother the
teacher anymore?"
36 But Jesus didn't listen to them. He told the
synagogue ruler, "Don't be afraid. Just believe."
37 He let only Peter, James, and John, the brother of
James, follow him.
38 They came to the home of the synagogue ruler.
There Jesus saw a lot of confusion. People were crying
and sobbing loudly.
39 He went inside. Then he said to them, "Why all this
confusion and sobbing? The child is not dead. She is
only sleeping."
40 But they laughed at him. He made them all go outside.
He took only the child's father and mother and the disciples
who were with him. And he went in where the child was.
41 He took her by the hand. Then he said to her,
"Talitha koum!" This means, "Little girl, I say to you, get up!" 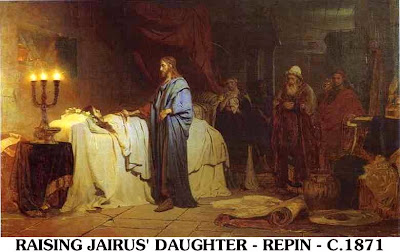 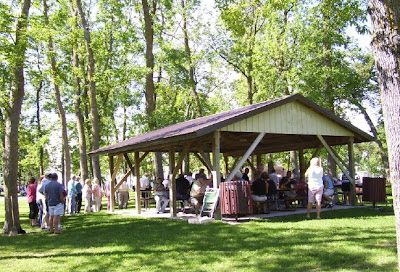 Everyone is invited to share in an evening of food
and fun! Grilled hot dogs, buns, baked beans,
marshmallows, lemonade, tea and water will be
furnished. Paper products will also be provided.
Bring any kind of side dish, dessert, chips or snack
to share with others. Bring your own beverage. 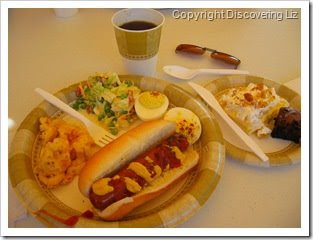 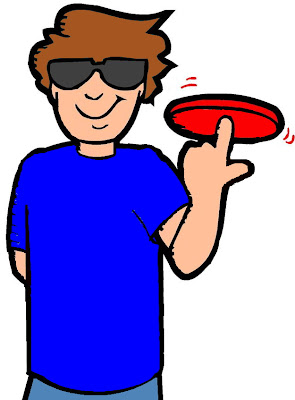 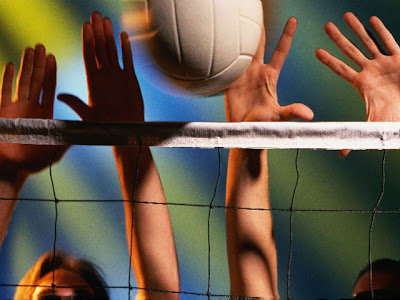 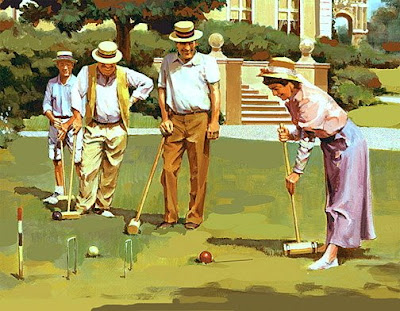 If you prefer, you can bring your own board games,
dominoes or cards, etc. 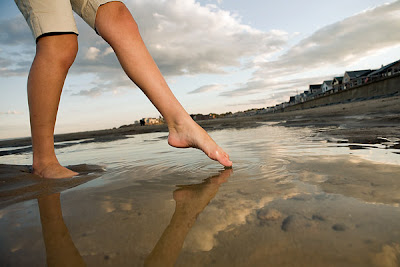 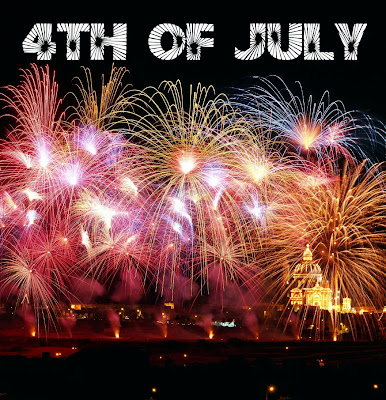 After voting for independence on July 2nd,
Congress focused on the
DECLARATION OF INDEPENDENCE,
a statement prepared by a committee with
Thomas Jefferson as its principal author.
Congress approved it on July 4. A day earlier,
John Adams wrote to his wife Abigail: "The second day of July, 1776, will be the most
memorable epoch in the history of America.
I believe that it will be celebrated by succeeding
generations as a great anniversary festival. It
ought to be commemorated as the day of
deliverance, by solemn acts of devotion to God
Almighty. It ought to be solemnized with pomp
and parade, with shows, games, sports, guns,
bells, bonfires, and illuminations, from one end
of this continent to the other,
from this time forward forever more.
• • • • • • • • • • • • • • • • • •
So ring a few bells, play a few games, have a parade,
but most importantly, give enormous thanks for the
perception, the judgment, and the vision of these
wonderful men in knee breeches who composed
this document. Now I'm talking "Grace of God".
≈≈≈≈≈≈≈≈≈≈≈≈≈≈≈≈≈≈≈≈≈≈≈≈≈≈≈≈≈≈≈≈≈≈≈≈≈≈≈≈≈≈
FUTURE FOCUS
SUNDAY, JULY 5TH – 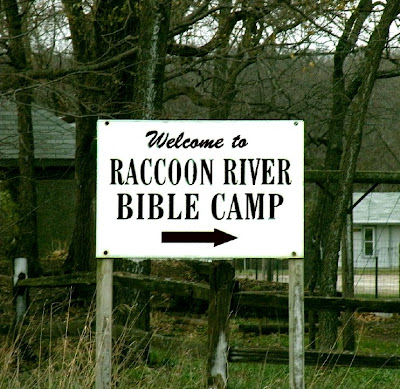 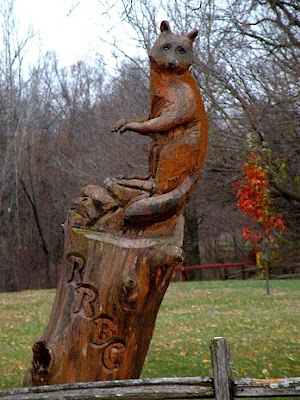 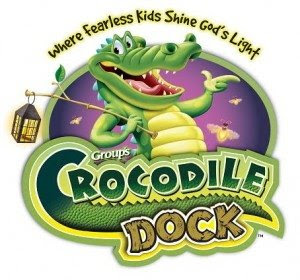 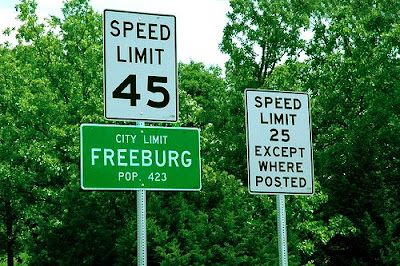 IT APPEARS TO BE A BEAUTIFUL PLACE! 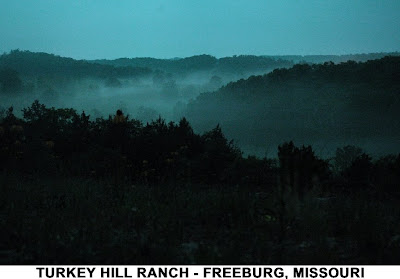 I WOULD HAVE ANXIETY ABOUT THE DRESS CODE THOUGH. :) 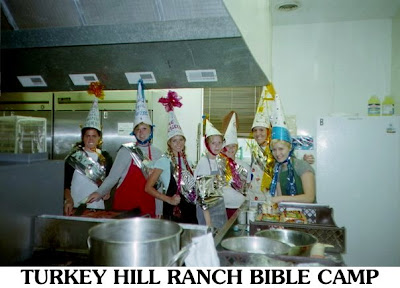 I make it sound extraordinary, when in fact it was
just a routine operation . . . and you say there are
no more miracles.