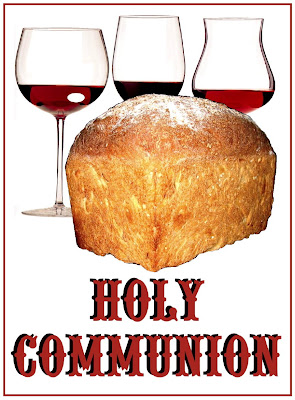 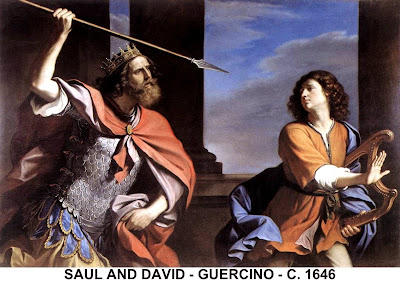 The Lord interrupts Samuel's grief over Saul's many
failures and sends him to Jesse of Bethlehem to
anoint one of his sons the next king. God's chosen
one is the least of them. God tells Samuel to pay no
attention to the look of his face or his height. Yet
when David finally appears before Samuel, he is
described as "ruddy, lovely-eyed, and handsome,"
and of him God says, "This is the one."

How did Samuel know the Lord was speaking this
time, rather than just himself? How do you know
when it is God speaking? How do you distinguish
your own thoughts from the voice of God?

1 SAMUEL 15:34-16:13 (New International Version)
34 Then Samuel left for Ramah, but Saul went up to
his home in Gibeah of Saul.
35 Until the day Samuel died, he did not go to see
Saul again, though Samuel mourned for him. And the
LORD was grieved that he had made Saul king over
Israel.
1 SAMUEL 16:1-13 SAMUEL ANOINTS DAVID
1 The LORD said to Samuel, "How long will you mourn
for Saul, since I have rejected him as king over Israel?
Fill your horn with oil and be on your way; I am sending
you to Jesse of Bethlehem. I have chosen one of his
sons to be king."
2 But Samuel said, "How can I go? Saul will hear about
it and kill me."  The LORD said, "Take a heifer with you
and say, 'I have come to sacrifice to the LORD.'
3 Invite Jesse to the sacrifice, and I will show you what
to do. You are to anoint for me the one I indicate."
4 Samuel did what the LORD said. When he arrived at
Bethlehem, the elders of the town trembled when they
met him. They asked, "Do you come in peace?"
5 Samuel replied, "Yes, in peace; I have come to
sacrifice to the LORD. Consecrate yourselves and come
to the sacrifice with me." Then he consecrated Jesse and
his sons and invited them to the sacrifice.
6 When they arrived, Samuel saw Eliab and thought,
"Surely the LORD's anointed stands here before the
LORD."
7 But the LORD said to Samuel, "Do not consider his
appearance or his height, for I have rejected him. The
LORD does not look at the things man looks at. Man
looks at the outward appearance, but the LORD looks
at the heart."
8 Then Jesse called Abinadab and had him pass in
front of Samuel. But Samuel said, "The LORD has not
chosen this one either."
9 Jesse then had Shammah pass by, but Samuel said,
"Nor has the LORD chosen this one."
10 Jesse had seven of his sons pass before Samuel,
but Samuel said to him, "The LORD has not chosen
these."
11 So he asked Jesse, "Are these all the sons you
have?"
"There is still the youngest," Jesse answered, "but he
is tending the sheep."  Samuel said, "Send for him; we
will not sit down until he arrives."
12 So he sent and had him brought in. He was ruddy,
with a fine appearance and handsome features.  Then
the LORD said, "Rise and anoint him; he is the one."
13 So Samuel took the horn of oil and anointed him in
the presence of his brothers, and from that day on the
Spirit of the LORD came upon David in power.
Samuel then went to Ramah. 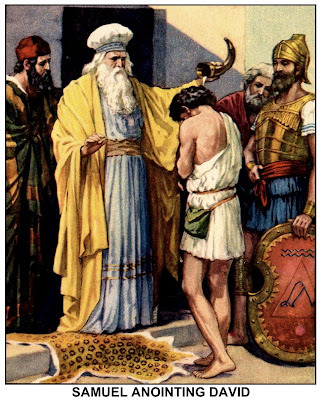 PSALM 72 (UMH 811)
In celebration of what a good king would do, what
respect he might expect, and what hopes the people
might have for him and his reign.
This is one of the several "Royal Psalms." As you
celebrate with this psalm, consider using images
and sounds (trumpet fanfares, etc) that combine the
"usual trappings" of royalty with the specific attributes
of God's kingship described here — offering justice
to the poor, deliverance to the needy, and prosperity
to all. Although the psalm uses much nature imagery
to describe the righteous king, this is not an invitation
to "escapist" images or sounds, but rather an invitation
to use your imagination to translate the nature imagery
back into scenes of everyday lived reality. In other words,
let the words of the psalm paint the nature pictures; in
projected or other images, focus squarely on the people.

Psalm 72 (New International Version)
Of Solomon.
1 Endow the king with your justice, O God,
the royal son with your righteousness.
2 He will judge your people in righteousness,
your afflicted ones with justice.
3 The mountains will bring prosperity to the people,
the hills the fruit of righteousness.
4 He will defend the afflicted among the people
and save the children of the needy;
he will crush the oppressor.
5 He will endure as long as the sun,
as long as the moon, through all generations.
6 He will be like rain falling on a mown field,
like showers watering the earth.
7 In his days the righteous will flourish;
prosperity will abound till the moon is no more. 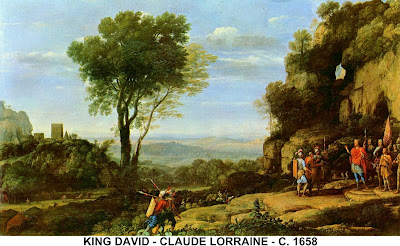 8 He will rule from sea to sea
and from the River to the ends of the earth.
9 The desert tribes will bow before him
and his enemies will lick the dust.
10 The kings of Tarshish and of distant shores
will bring tribute to him;
the kings of Sheba and Seba
will present him gifts.
11 All kings will bow down to him
and all nations will serve him.
12 For he will deliver the needy who cry out,
the afflicted who have no one to help.
13 He will take pity on the weak and the needy
and save the needy from death.
14 He will rescue them from oppression and violence,
for precious is their blood in his sight.
15 Long may he live!
May gold from Sheba be given him.
May people ever pray for him
and bless him all day long.
16 Let grain abound throughout the land;
on the tops of the hills may it sway.
Let its fruit flourish like Lebanon;
let it thrive like the grass of the field.
17 May his name endure forever;
may it continue as long as the sun.
All nations will be blessed through him,
and they will call him blessed.
18 Praise be to the LORD God, the God of Israel,
who alone does marvelous deeds.
19 Praise be to his glorious name forever;  may the
whole earth be filled with his glory.   Amen and Amen.
20 This concludes the prayers of David son of Jesse.
2 CORINTHIANS 5:6-10 (11-13), 14-17; 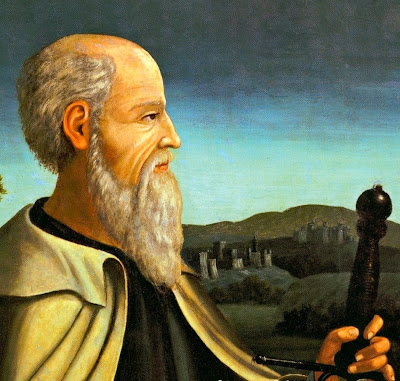 As we explore Paul's second (or perhaps third)
letter to the Christians at Corinth today and for the
next four weeks, it's important to note that Paul is
engaged in a "teaching conversation" here, and by
no means a dispassionate one. Everywhere in this
letter we see signs that Paul is a "leader at odds
with the troops." The conflict between himself and
the Corinthian people and leadership is such that
he's constantly trying to convince them that they
still need to listen to him. He has offended them,
and they have offended him. Paul defends his
ministry: "We are always confident though humble
in our proclamation of the one who died for all that
all may live through and for him."
This is not a fight to be won, but a relationship to
be restored.
2 CORINTHIANS 5:6-10; (New Living Translation)
6 So we are always confident, even though we know
that as long as we live in these bodies we are not at
home with the Lord.
7 For we live by believing and not by seeing.
8 Yes, we are fully confident, and we would rather be
away from these earthly bodies, for then we will be at
home with the Lord.
9 So whether we are here in this body or away from
this body, our goal is to please him.
10 For we must all stand before Christ to be judged.
We will each receive whatever we deserve for the
good or evil we have done in this earthly body.

2 CORINTHIANS 5:11-13
We Are God’s Ambassadors
11 Because we understand our fearful responsibility
to the Lord, we work hard to persuade others. God
knows we are sincere, and I hope you know this, too.
12 Are we commending ourselves to you again? No,
we are giving you a reason to be proud of us, so you
can answer those who brag about having a
spectacular ministry rather than having a sincere heart.
13 If it seems we are crazy, it is to bring glory to God.
And if we are in our right minds, it is for your benefit.

2 CORINTHIANS 5:14-17
14 Either way, Christ’s love controls us. Since we
believe that Christ died for all, we also believe that
we have all died to our old life.
15 He died for everyone so that those who receive
his new life will no longer live for themselves. Instead,
they will live for Christ, who died and was raised for
them.
16 So we have stopped evaluating others from a
human point of view. At one time we thought of
Christ merely from a human point of view. How
differently we know him now!
17 This means that anyone who belongs to Christ
has become a new person. The old life is gone;
a new life has begun!

MARK 4:26-34
— Two parables of the kingdom of God
First, seed scattered that takes root, grows, and
leads to harvest.

This parable points to a very different model, a
process of nearly untended organic growth over
time that leads to a harvest. The farmer does
almost nothing himself to produce the crop except
plant the seed. The earth, sun, rain and plant itself
do nearly all the work. The kingdom of God is thus
not "built" by us; we just get to help plant seeds,
watch it grow.
MARK 4:26-34 (New Living Translation)

PARABLE OF THE GROWING SEED
26 Jesus also said, “The Kingdom of God is like a
farmer who scatters seed on the ground.
27 Night and day, while he’s asleep or awake, the
seed sprouts and grows, but he does not
understand how it happens.
28 The earth produces the crops on its own. First
a leaf blade pushes through, then the heads of
wheat are formed, and finally the grain ripens.
29 And as soon as the grain is ready, the farmer
comes and harvests it with a sickle, for the
harvest time has come.”

PARABLE OF THE MUSTARD SEED
Second is the mustard weed, a woody, fast
growing and spreading persistent nuisance in
Middle Eastern fields much like kudzu in the U.S.
south or pokeweed in the midwest. 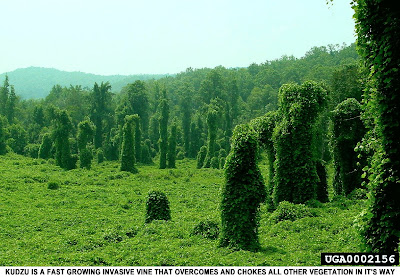 The parable of the mustard weed is perhaps even
odder, especially with the parable of the crop seeds.
No one "sows" mustard seeds on the land. Mustard
is a weed. Yet twice, in verse 31 and verse 32,
Jesus says "whenever it is sown." Is He saying
that God sows the kingdom like mustard seed
seems to sow itself, spreading itself everywhere,
and growing from a tiny seed into a sturdy woody
bush. Like a weed, people may not want the
kingdom. Like mustard, it is persistent,
fast-spreading, fast-growing and strong. The
kingdom spreads like a weed and gives comfort
to all the people everywhere "whenever" its seed
is sown. Orderly crops and disorderly weeds,
together, end up giving a full picture of God's
kingdom and of ways we can witness to it and
help embody it? 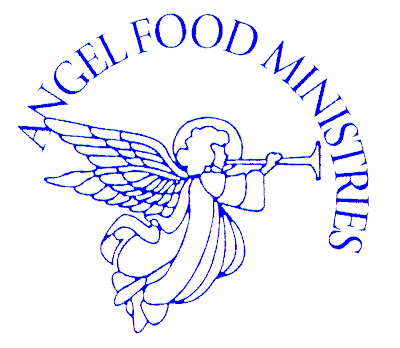 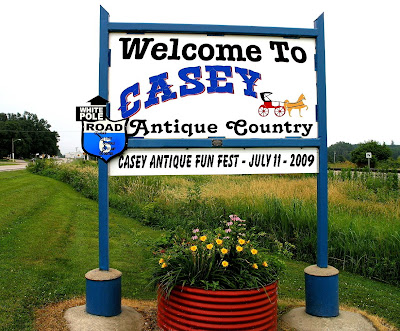